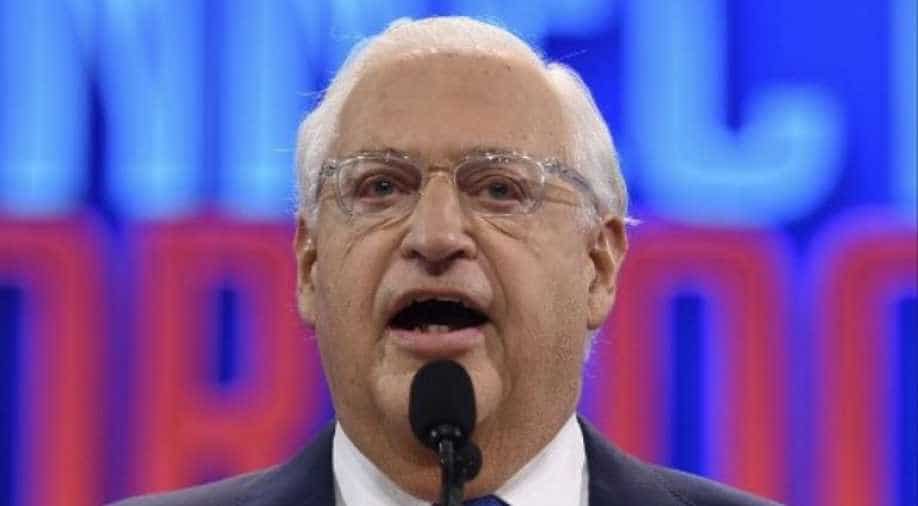 In a statement late Saturday in response to US ambassador to Israel David Friedman's comments in a New York Times interview, a Palestinian government spokesman said some leading US policy on the issue were "extremists" lacking in 'political maturity'.

Palestinian leaders say a US envoy's comments on Israel having the right to annex at least parts of the occupied West Bank show "extremists" are involved in White House policy on the issue.

In a statement late Saturday in response to US ambassador to Israel David Friedman's comments in a New York Times interview, a Palestinian government spokesman said some leading US policy on the issue were "extremists" lacking in "political maturity."

The Palestinian foreign ministry said it was looking into filing a complaint with the International Criminal Court on the issue.

"Their vision is about the annexation of occupied territory, a war crime under international law," he said.

Erekat also renewed a Palestinian call for countries to boycott a June 25-26 conference in Bahrain to discuss economic aspects of a peace deal the White House has been working on.

In the interview published Saturday, Friedman said some degree of the annexation of the West Bank would be legitimate.

"Under certain circumstances, I think Israel has the right to retain some, but unlikely all, of the West Bank," he said.

Friedman has in the past been a supporter of Israeli settlements as has the family of Jared Kushner, US President Donald Trump's son-in-law and adviser leading efforts to put together the peace deal.

Bringing settlements under Israeli sovereignty on a large-scale could end any remaining hopes for a two-state solution to Israel's conflict with the Palestinians.

More than 600,000 Jewish settlers now live in the West Bank and annexed east Jerusalem among some three million Palestinians.

On the long-delayed peace plan, Friedman said it was aimed at improving the quality of life for Palestinians but would fall well short of a "permanent resolution to the conflict".

Publication of the plan looks set to be further delayed after the Israeli parliament called a snap general election for September, the second this year.

The plan is regarded as too sensitive to release during the campaign.

The Palestinian leadership has already rejected the plan, saying Trump's moves so far show him to be blatantly biased in favour of Israel.

Those moves include recognising the disputed city of Jerusalem as Israel's capital and cutting hundreds of thousands of dollars in aid to the Palestinians.