US Election 2020: Donald Trump predicts no Christmas and Thanksgiving if Joe Biden wins 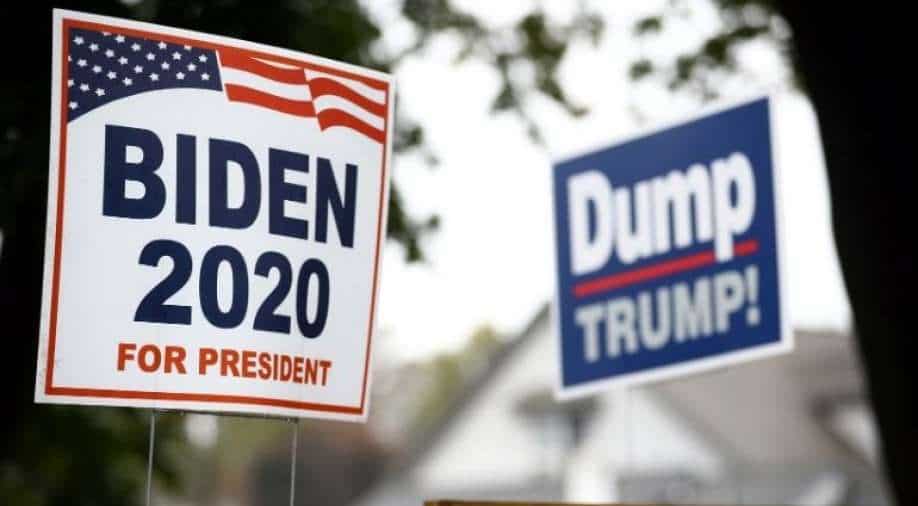 Yard signs supporting Democratic US presidential nominee and former Vice President Joe Biden and against US President Donald Trump are seen outside of a house in Lancaster, Pennsylvania Photograph:( Reuters )

Less a week is left for the US Election 2020, and the two leaders — the Democrat candidate and former Vice President Joe Biden and the Republican candidate and current President Donald Trump — have started the last leg of their election campaigns.

The two leaders are taking direct hits at each other now, with the opinions polls showing Joe Biden in lead for now, with several experts now predicting an unexpected result at the end of the elections.

While Biden is attacking Trump for downplaying and mishandling the coronavirus pandemic, Trump has painted a rather grim picture of Biden's American infront of his own supporters.

In an election rally in Goodyear, Arizona on Wednesday, Trump told his supporters that if the country elects Joe Biden as their next president, the Americans will have to bid farewell to Christmas and Thanksgiving — few of the most important festivals of the Americans. "If you vote for Biden, it means no kids in school, no graduations, no weddings, no Thanksgiving, no Christmas and no Fourth of July together,” he said.

Biden has often blamed Trump for reopening the economy way faster, causing more damage to human lives. Trump also took a hit at Biden for this calling these elections a choice between "a TRUMP BOOM or a BIDEN LOCKDOWN. Its a choice between our plan to Kill the virus or Bidens plan to kill the American Dream!"

Experts believe that this is Trump's way of attacking the emotional side of the voters, while Biden is still playing with the logical and practical side of the election campaigning.

The statements came while Joe Biden was holding small and socially-distanced public gatherings with the voters who had cast their ballot either by mail-in and/or voted early. Biden, too, with his wife Jill Biden, cast an early ballot in Wilimington on Wednesday. He also met with few health experts to discuss coronvirus relief strategy, while Trump was painting a grim winter picture for the Americans.