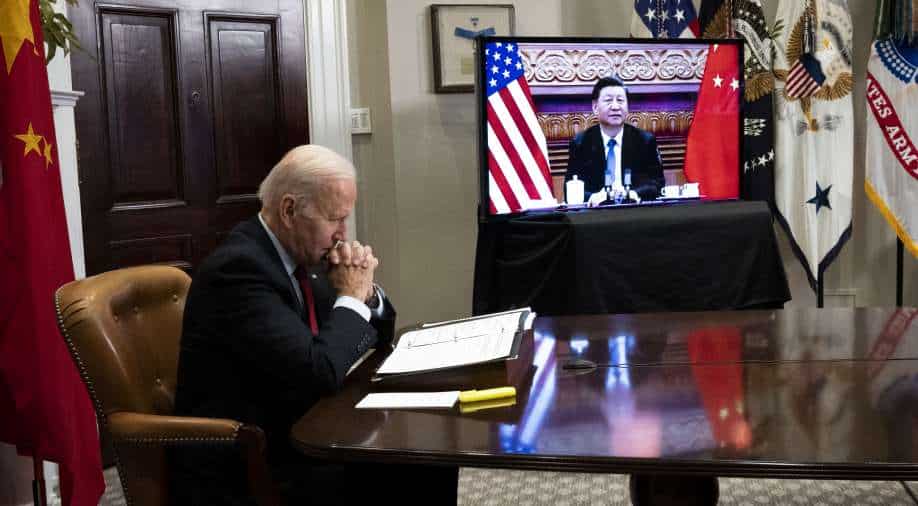 At the end of 3 1/2 hours of talks, the two did not even cobble together the sort of joint statement that has typically punctuated summits between the United States and China over the decades

The virtual meeting between President Joe Biden and China’s leader, Xi Jinping, produced no breakthroughs in a relationship that has spiraled dangerously downward. That was not the intent.

Instead, the two leaders sought to keep the many disputes between the two countries from escalating into a broader conflict. If they can translate their words into a kind of détente, it would count as a diplomatic success.

“It seems clear to me we need to establish some common-sense guardrails,” Biden told Xi in opening remarks, speaking over what amounted to the equivalent of a Zoom call from the Roosevelt Room at the White House and the East Hall in the Great Hall of the People in Beijing.

Xi, for his part, called Biden “my old friend” and used a nautical metaphor, comparing the two countries to ships that must together navigate the ocean’s wind and waves without colliding.

Bubbling under the surface, though, was acrimony that could prove difficult to resolve.

At the end of 3 1/2 hours of talks, the two did not even cobble together the sort of joint statement that has typically punctuated summits between the United States and China over the decades. Xi’s last meeting with a U.S. president, Donald Trump in 2019, also ended with no joint statement, marking the deterioration in ties.

Nor did the meeting end with any agreement to have groups of officials from both sides hold further talks on strategic nuclear issues and conflicts in cyberspace — the way Biden did in his summit in June with another quarrelsome geopolitical rival, President Vladimir Putin of Russia.

“We were not expecting a breakthrough,” a senior administration official told reporters shortly after the talks with Xi ended. “There were none.”

Instead, the two sides issued their own statements, each emphasizing the points of long-standing contention. They amounted to catalogs of mutual grievances that offered little room for compromise.

Biden raised concerns about human rights abuses in Xinjiang, Tibet and Hong Kong, and about China’s “unfair trade and economic policies” harming American workers, the White House statement said. Xi, according to China’s own readout, said that U.S. support for Taiwan was “playing with fire,” and explicitly warned that the world risked slipping back into the superpower confrontations of a half-century ago.

“Engaging in ideological demarcation, camp division, group confrontation, will inevitably bring disaster to the world,” Xi said, a clear reference to a pillar of the new administration’s strategy for challenging China by teaming up with like-minded nations that fear China or oppose its authoritarian model. “The consequence of the Cold War are not far away.”

With that reference, Xi plunged directly into the debate now underway in Washington about whether the two powers are descending into something akin to the Cold War, or whether the deep economic, trade and technological links between China and the U.S. make any comparison to the old U.S.-Soviet Union relationship impossible.

The tone of the meeting was a reminder that China, perhaps inevitably, remains what Biden and his top advisers have cast as the greatest geopolitical challenge to the United States in its history. They have rejected the Cold War comparisons as overly simplistic, and as Biden’s national security adviser, Jake Sullivan, put it, “We have the choice not to do that.”

Although the two leaders have spoken by telephone twice this year, the conference was intended to replicate the more thorough discussion of issues in previous summits between the United States and China — something that has not been possible because pandemic and political preoccupations have kept Xi from traveling since January 2020.

The White House had hoped to hold the meeting in person, possibly at the Group of 20 meeting in Rome last month, but concluded that it was better to meet remotely than to let tensions fester into next year. Xi is sure to be preoccupied then with the Winter Olympics in Beijing in February and a Communist Party congress in November that is expected to extend his rule.

Biden has repeatedly suggested that it should be possible for the United States to engage in vigorous competition with China and to confront it over certain issues, without risking clashes — whether in the disputed waters off China’s coast or in the murky shadows of cyberspace.

He also wanted to hold the meeting after he had begun to shore up American competitiveness at home. Just hours before meeting Xi, he signed the bipartisan infrastructure bill, which his aides cited as an example of refocusing on international competitiveness. He also recently signed other legislation that bans some key Chinese technology players, like telecommunications giant Huawei, from operating inside the United States.

What is perceived as a move to strengthen the economy in one capital can seem aggressive in the other.

“Both leaders are dissatisfied with the state of the relationship and the behavior of the other country,” said Danny Russel, a former assistant secretary of state who participated in talks with Xi during the Obama administration. “Both are also mindful of the risk of an incident between our militaries that could quickly spin out of control.”

No one meeting could have resolved the enormous divisions that have grown between the two countries.

The trade war that Trump started remains unresolved, with China still more than $180 billion short of a pledge to purchase $380 billion in American products before a deadline of Dec. 31. Problems have also emerged or gotten worse, including a Pentagon assessment that China is rapidly expanding its strategic nuclear arsenal, and may be abandoning its decadeslong strategy of maintaining a “minimum deterrent.”

Administration officials declined to discuss what was said about the nuclear buildup, beyond a vague statement that Biden “underscored the importance of managing strategic risks.”

Other topics that analysts thought would come up did not, according to the senior administration official. They included disputes over granting visas for diplomats, journalists and others, as well as a possible invitation to attend the Winter Olympics in Beijing in February.

Many also expected an effort to create a forum for discussing disputes.

The two sides did agree to talks among lower-level officials. That, and the leaders’ tone in their published statements, raised hopes that tensions could ease at least a bit.

“All the right things were said by both sides to stabilize a relationship marked by mutual mistrust,” said Rorry Daniels, a security specialist with the National Committee on American Foreign Policy in New York. “The question moving forward is how each side will adjust policy to meet this change of direction.”

On Tuesday, Biden suggested that officials from both sides would meet in working groups, though he did not specify on which issues. “We got a lot to follow up on,” he said.

After Biden’s last telephone call with the Chinese leader in September, the tone of the relationship, at least, improved considerably.

Secretary of State Antony Blinken and his counterpart, Wang Yi, met on the sidelines of the G-20 gathering and spoke by phone again last weekend. Biden’s envoy on climate change, John Kerry, and Xi’s, Xie Zhenhua, reached a surprise agreement on the issue at the talks this month in Glasgow, Scotland.

Xi, according to the Chinese description of the talks, suggested that cooperation on issues like climate change was conditional on stability across the spectrum of the relationship — a stance at odds with Biden’s view.

“China and the United States are entering a period of détente, but we don’t know how long it will be and to what extent,” said Cheng Xiaohe, an associate professor of international studies at Renmin University in Beijing. “We have a lot of uncertainties now.”

Even as the two leaders met virtually, another meeting was taking place in Beijing, commemorating the American pilots known as the Flying Tigers who aided China during its war against Japan in 1941 and 1942.

“The story of the Flying Tigers undergirds the profound friendship forged by the lives and blood of the Chinese and American people,” Qin Gang, China’s ambassador to the United States, said during the event. Acknowledging the tensions in the relationship, he added that the two countries “should inherit the friendly friendship tempered by war.”