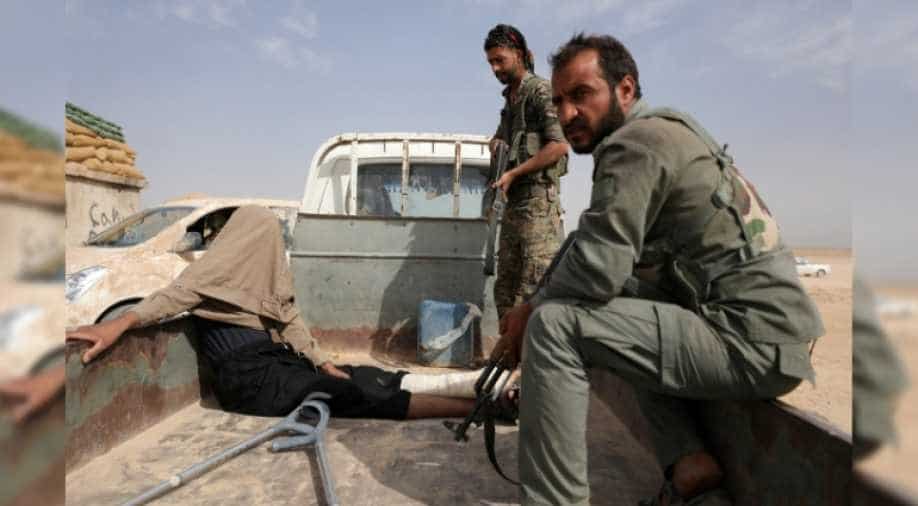 The Kurdish-led Syrian Democratic Forces (SDF) on Saturday announced the final push to expel hundreds of diehard jihadists from that patch on the Iraq border.

Syrian fighters backed by artillery fire from a US-led coalition battled a fierce jihadist fightback Monday as they pushed to retake the last morsel of territory from the Islamic State group.

Mushrooming black clouds rose over the embattled jihadist holdout in eastern Syria, as missiles and a warplane streaked through the sky.

More than four years after the extremists declared a "caliphate" across large parts of Syria and neighbouring Iraq, several offensives have whittled that proto-state down to a tiny holdout.

The Kurdish-led Syrian Democratic Forces (SDF) on Saturday announced the final push to expel hundreds of diehard jihadists from that patch on the Iraq border.

The US-led coalition maintained a steady beat of bombings on the last IS pocket on Monday after an early morning IS counterattack caused several SDF casualties.

"IS launched a counterattack on our forces and we are now responding with rockets, air strikes and direct clashes," SDF spokesman Mustafa Bali told AFP.

The sound of bombs echoed dozens of kilometres (miles) away and columns of dark grey smoke could be seen from SDF territory.

Bali said there were "dozens of SDF hostages held by IS" inside their last foothold, but denied reports of executions.

The Syrian Observatory for Human Rights, a Britain-based monitor, said the alliance of Kurdish and Arab fighters had pressed on Monday morning in the face of tough obstacles.

"The SDF are advancing slowly in what remains of the IS pocket" on the edges of the village of Baghouz, Observatory chief Rami Abdel Rahman said.

But landmines, IS snipers, and tunnels the extremists have dug out for their defence are hindering the advance, he said.

Backed by coalition air strikes, the SDF alliance has been battling to oust the jihadists from the eastern province of Deir Ezzor since September.

Since December, tens of thousands of people, most women and children related to IS fighters, have fled to SDF territory.

US-backed forces have screened the new arrivals, weeding out potential jihadists for questioning.

On Monday, dozens of coalition and SDF fighters were stationed at a screening point for new arrivals from IS areas.

Coalition forces stood over about 20 men who were crouching on the ground.

Some 600 people were able to reach SDF territory on Sunday after fleeing the fighting, the Observatory said.

Among them, were 20 suspected IS members, including two French women, seven Turks, and three Ukrainians, said the monitor, which relies on sources inside Syria.

The SDF -- which has said it expects the final offensive to be over in days -- announced Sunday that it had taken some 40 positions from the jihadists following direct combat involving light weapons.

The alliance had earlier said that up to 600 jihadists, as well as hundreds of civilians, could remain inside a patch four square kilometres (one-mile square).

Spokesman Bali said IS leader Abu Bakr al-Baghdadi, the man who pronounced the cross-border "caliphate" in 2014, was not among them, and likely not in Syria.

At the height of their rule, the jihadists imposed their brutal interpretation of Islamic law on territory roughly the size of Britain.

But military offensives in both countries, including by the SDF, have since retaken the vast bulk of their territory.

The jihadists, however, retain a presence in Syria's vast Badia desert and have claimed a series of deadly attacks in SDF-held areas.

US President Donald Trump in December shocked Washington's allies by announcing a full withdrawal of US troops from Syria as IS had been "beaten".

But the US military warned in a report published this month that IS "could likely resurge in Syria within six to twelve months and regain limited territory" if sustained pressure is not maintained.

Trump's decision to withdraw US troops has left Syria's Kurds scrambling for safeguards.

A US departure makes them more vulnerable to a long-threatened attack by neighbouring Turkey, who considers Kurdish fighters to be "terrorists", and dashes their dreams of autonomy.

The Kurds have largely stayed out of Syria's nearly eight-year civil war, instead of building their own semi-autonomous institutions in the northeast of the country.

But the expected US pullout has seen them grappling to mend ties with the Damascus regime, which is against Kurdish self-rule.

Syria's war has killed 360,00 people and displaced millions since it started in 2011 with the brutal repression of anti-government protests.