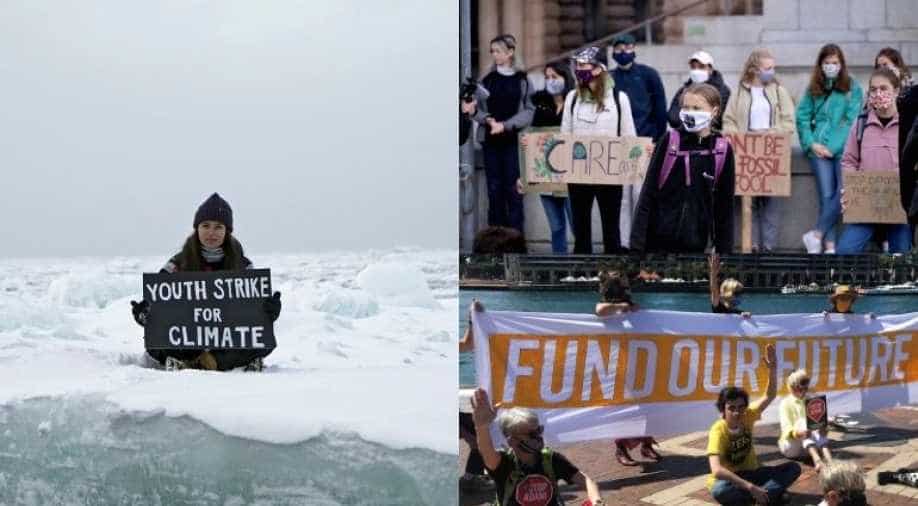 With wild weather wreaking havoc across the world, from fires ravaging the US West, to abnormal heatwaves in the Siberian Arctic and record floods in China, organisers said the protests would remind politicians that while the world was focused on COVID-19, the climate crisis has not gone away.

United under Swedish activist Greta Thunberg, young people rallied across the world on Friday to demand urgent action to halt catastrophic climate change, in their first global action during the coronavirus pandemic.

With wild weather wreaking havoc across the world, from fires ravaging the US West, to abnormal heatwaves in the Siberian Arctic and record floods in China, organisers said the protests would remind politicians that while the world was focused on COVID-19, the climate crisis has not gone away.

Demonstrations were planned in more than 3,100 locations, with Australia, Japan and Fiji among the first to kick off, though with pandemic-related curbs limiting the size of gatherings, much of the action shifted online.

The demonstration, organised by the Fridays For Future movement, was part of a series of world-wide protests that were expected to be confined to small gatherings and online activism due to the COVID-19 pandemic.

The young activists were calling for immediate climate action, holding banners reading "Stop Denying the Climate is Dying" and "Don't Be a Fossil Fool." and mnany had slogans on their masks.

They demand that lawmakers stick to the 2015 landmark Paris climate deal that asks both rich and poor countries to take action to curb the rise in global temperatures that is melting glaciers, raising sea levels and shifting rainfall patterns.

Thunberg said the aim of the protests was to raise awareness, impact public opinion and put pressure on people in power to take action to solve the climate crisis.

Like many of her generation, Mya-Rose Craig feels strongly that adults have failed to take the urgent action needed to tackle global warming and so she has headed to the Arctic Ocean to protest.

Armed with a placard reading 'Youth Strike for Climate", the 18-year-old British activist is staging the most northerly protest in a series of youth strikes worldwide.

The strikes, made famous by Swedish campaigner Greta Thunberg, are resuming after a lull caused by the global coronavirus pandemic to draw public attention back to the threat posed by climate change.

Thousands of young people took to the streets of Berlin to protest against what they call government inaction on the climate crisis.

Protesters cycled in groups to the city's landmark, the Brandenburg Gate for a rally following a call for a global climate strike by youth activist movement Fridays For Future.