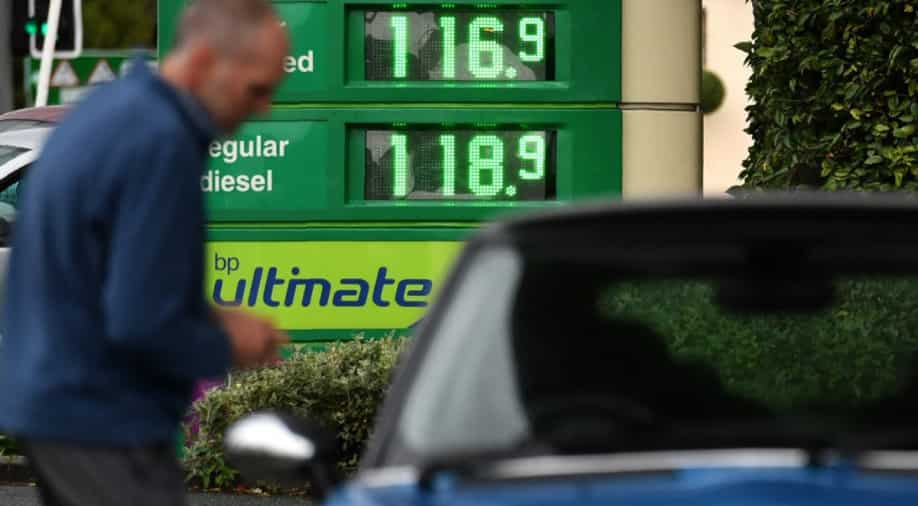 The price of petrol and diesel fuels are shown on an electronic display board outside a petrol station in Manchester, north-west England Photograph:( AFP )

With the cost of a tank of fuel hitting a record £100 due to Russia's invasion of Ukraine, British Prime Minister Boris Johnson said the UK's economy is 'steering into the wind'

The largest trade union in the United Kingdom has warned that healthcare staff in the country is calling in sick to work as they cannot afford to cars with petrol.

“[Petrol price rises are] having a big impact on people with jobs that mean they have to travel. So community health workers, health visitors, care workers, social workers … are saying they just cannot afford to do their jobs any more,” said Christina McAnea, general secretary of the public services union Unison, told 'The Guardian'.

“We’re actually hearing of people who would rather phone in sick because they don’t have the money to fill up their cars and do their jobs. And more and more people are leaving public services, even in local government. There’s huge vacancies across local government.”

With the cost of a tank of fuel hitting a record £100 due to Russia's invasion of Ukraine, British Prime Minister Boris Johnson said the UK's economy is “steering into the wind”.

According to McAnea, ''We don’t want to bring low-paid workers out on strike. But if there’s no alternative, what else can people do?''

“If we’ve got a government where they are getting 2-3 per cent pay increases and we’ve got inflation running at 10% or even more by the end of the year and they already pay a disproportionate amount of their income on fuel, housing, energy and food costs, if you are low paid worker … that has a huge impact on people.”

British Chancellor of the Exchequer Rishi Sunak is facing criticism due to mounting cost of living and inflation after analysts warned of a “wage-price spiral”.

“We don’t want to inconvenience people and we know that has a huge impact on people. But there comes a point where there’s no alternative,” McAnea said.

“The same thing could happen in England and Wales. I’m not saying there will be strikes tomorrow, but there’s a lot of anger out there, and people become more desperate,” she added.