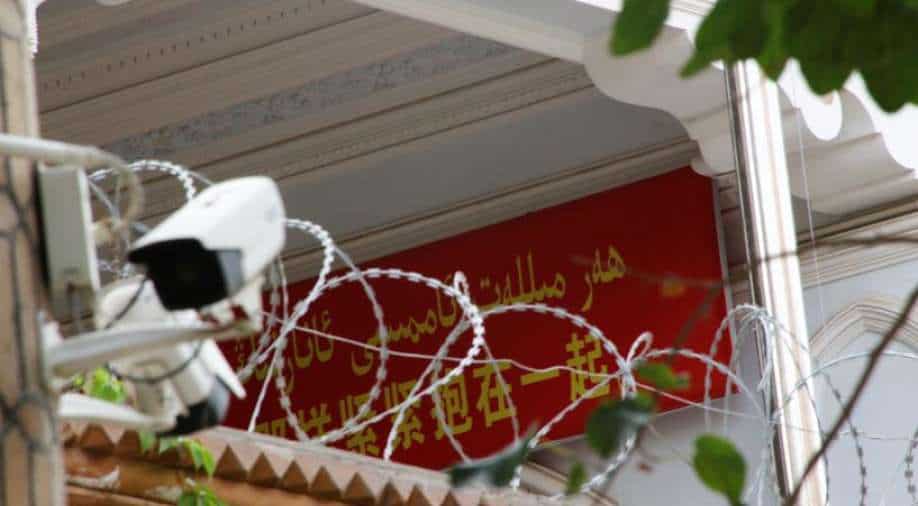 FILE PHOTO: A propaganda banner and a security camera are placed on the walls of a mosque in the Old City in Kashgar, Xinjiang Uighur Autonomous Region Photograph:( Reuters )

The Business, Energy and Industrial Strategy Committee on Tuesday said some British firms could be complicit in the use of forced labour in China's Xinjiang region, and that there was a lack of transparency in firms' supply chains and failures in government.

The UK government must toughen measures to tackle modern slavery to ensure Uighur forced labour is not used in their supply chains, a panel of British lawmakers has said.

The Business, Energy and Industrial Strategy Committee on Tuesday said some British firms could be complicit in the use of forced labour in China's Xinjiang region, and that there was a lack of transparency in firms' supply chains and failures in government.

Xinjiang is home to many Chinese ethnic minorities, including Uighur Muslims.

The MPs said firms in fashion, retail, media and technology could all be implicated, and it was time to fine and blacklist those that failed to change.

The BEIS committee said it was appalled that companies still cannot guarantee that their supply chains are free from forced labour. Those that cannot prove they don't have links with Xingjian should face sanctions, it said.

The hard-hitting report says that government policy and modern slavery legislation is “not fit for purpose in tackling this serious situation” and government has been slow to make changes. The report recommends the government accelerates proposals to amend and strengthen the Modern Slavery Act 2015.

“The Modern Slavery Act is out of date, has no teeth, and we do not accept that businesses should be excused from doing basic due diligence to guarantee that their supply chains are fully transparent and free from forced labour and slavery,” the report said.

MPs conclusively recommend the government assess options for targeted sanctions against Chinese and international businesses implicated in human rights abuses. The report also calls for the introduction of fines for those who do not comply with modern slavery reporting rules to try to reduce risks in their supply chains.

Also read | 'Crime against humanity and genocide': US condemns China for abuse of Uighurs, Tibetans

"The government should create a 'white list' of companies which had shown evidenced actions to ensure their suppliers were not using slave labour in Xinjiang and a black list of those who could not provide such evidence or provide information about their sourcing. It said both lists should be updated every six months," the report added.

(with inputs from reports)