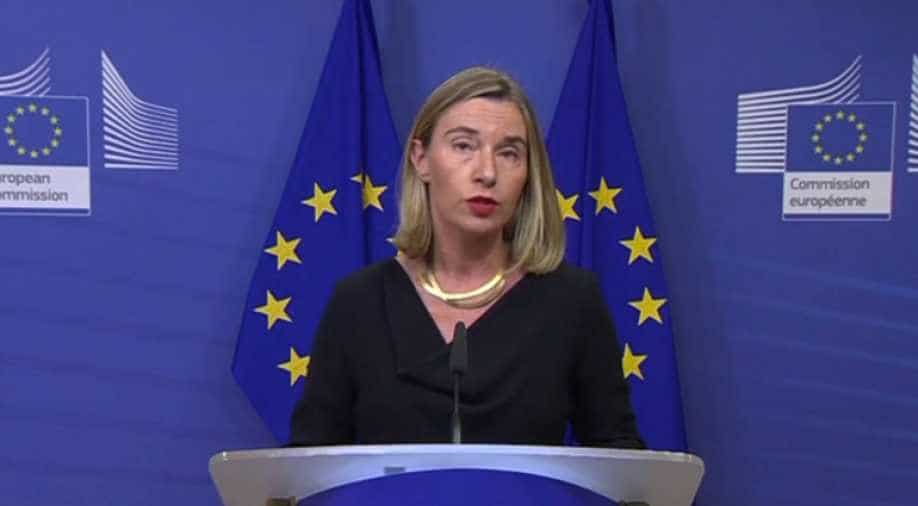 Federica Mogherini, High Representative of EU for Foreign Affairs and Security Policy said it was not up to any one country to terminate the nuclear deal with Iran. Photograph:( Twitter )

British PM Theresa May, French President Macron and German Chancellor Merkel said they 'stand committed to its full implementation by all sides' according to a joint statement

The leaders of Britain, France and Germany on Friday said they remain committed to the international nuclear deal with Iran after US President Donald Trump refused to certify the agreement.

British Prime Minister Theresa May, French President Emmanuel Macron and German Chancellor Angela Merkel said they "stand committed to its full implementation by all sides," according to a joint statement released by May's Downing Street office.

The leaders said they "take note of President Trump's decision" not to recertify Iran's compliance with the Joint Comprehensive Plan of Action (JCPoA) to the US Congress and were "concerned by the possible implications."

"The nuclear deal was the culmination of 13 years of diplomacy and was a major step towards ensuring that Iran’s nuclear programme is not diverted for military purposes," they added.

"We encourage the US Administration and Congress to consider the implications to the security of the US and its allies before taking any steps that might undermine the JCPoA, such as re-imposing sanctions on Iran lifted under the agreement."

"Our governments are committed to ensuring the JCPoA is maintained," they stressed.

The three leaders said they were concerned about Iran's ballistic missile programme and that they "stand ready to take further appropriate measures to address these
issues."

Trump launched a tougher strategy to check Iran's "fanatical regime" on Friday and warned that the landmark international nuclear deal could be terminated at any time.

In a much-anticipated White House speech, Trump stopped short of withdrawing from the 2015 accord, but "decertified" his support for the agreement and left its fate
in the hands of Congress.