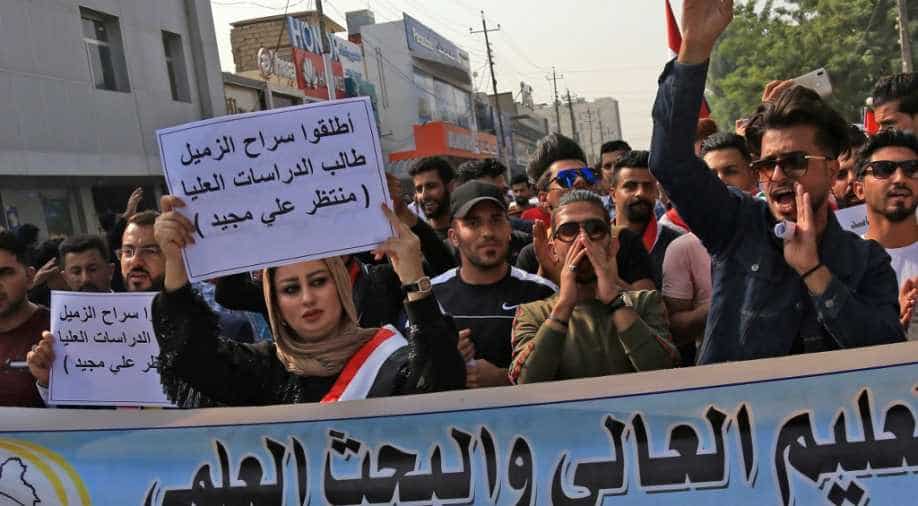 A file photo of protests in Iraq Photograph:( AFP )

Rights groups have slammed security forces for firing the military-grade gas grenades directly at protesters instead of up in the air.

Anti-government demonstrators have spread from their main protest camp in Tahrir (Liberation) Square onto three bridges linking the banks of the river Tigris.

Security forces have erected concrete barriers on the bridges to hold protesters back, and late on Wednesday they fired tear gas and live ammunition at crowds gathering on Al-Sinek and Al-Ahrar bridges.

One protester was shot dead by a live round and three died from wounds sustained by tear gas canisters.

Rights groups have slammed security forces for firing the military-grade gas grenades directly at protesters instead of into the air.

When shot at close range, the canisters can pierce skulls or chests, and advocacy groups have documented around two dozen deaths from such injuries among Iraqi protesters.

The overnight confrontation also injured more than 50 people, including at least six who sustained gunshot wounds.

Authorities fear crowds could use Al-Sinek bridge to reach the Iranian embassy, or cross the adjacent Al-Ahrar bridge further north to protest at the central bank and other government buildings.

Protesters in Tahrir have rebuked Tehran for propping up an Iraqi government they see as corrupt and inefficient, even accusing Iran of backing the use of violence against them.

More than 330 people have been killed since the protests broke out on October 1, according to an AFP toll, as authorities have stopped providing updated or precise figures.

The grassroots protests are the deadliest in decades but also the most widespread, with sit-ins at schools, outside government offices and public squares in Baghdad and across the Shiite-majority south.

In many areas, students and teachers have been at the forefront of demonstrations. Protest hotspots like Nasiriyah, Kut, Hillah and Diwaniyah have not seen steady school attendance in weeks.

But on Thursday, a security source told AFP that Baghdad's joint operations command authorised security forces to check school rosters in the capital to identify who may have skipped class to strike, particularly among teachers.

A spokesman for the education ministry confirmed security forces had deployed around schools in the capital to prevent sit-ins or road closures.