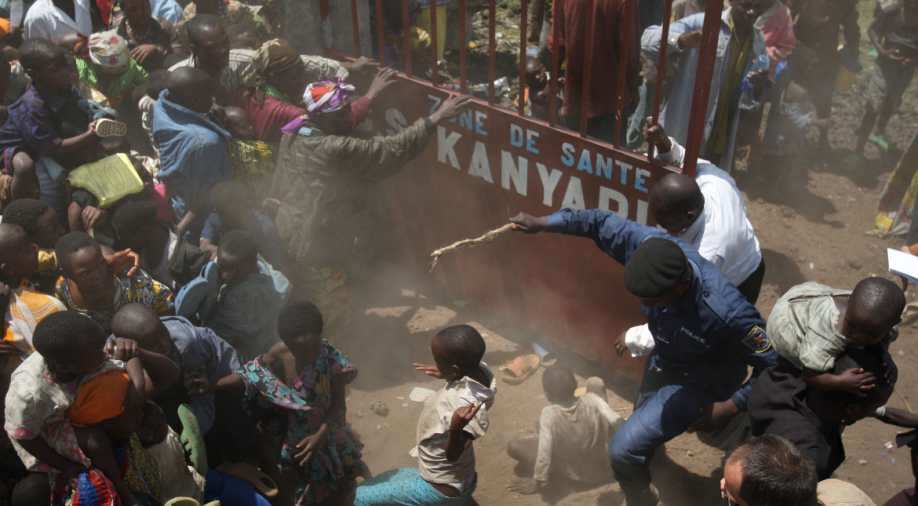 For the past two years the region around Beni has been afflicted by a series of massacres that have killed hundreds of civilians, most of whom were hacked to death. Photograph:( Getty )

At least 22 civilians were killed in a massacre in Democratic Republic of Congo's restive North Kivu province over the weekend, an official said Sunday.

The bloodshed occurred in Eringeti, a town 55 kilometres (35 miles) north of the regional hub Beni, a city plagued by a wave of attacks that have claimed more than 700 civilian lives according to regional official Amisi Kalonda, who blamed the latest violence on Ugandan rebels.

Kalonda said members of the Allied Democratic Forces (ADF), a group of rebels dominated by puritanical Ugandan Muslims and entrenched in the region for about two decades, stormed the town on Saturday afternoon.

"The ADF has yet again plunged the people of Eringeti and its surrounding areas into mourning," he told AFP, speaking from the North Kivu capital Goma.

"Yesterday, they killed 10 civilians. Twelve other bodies were found (Sunday) in the surrounding villages."

"The modus operandi is always the same," he said, adding that the victims were either killed with knives or machetes.

For the past two years the region around Beni has been afflicted by a series of massacres that have killed hundreds of civilians, most of whom were hacked to death.

Congolese officials have blamed the attacks on the ADF but several expert reports have suggested that other groups, including elements within the Congolese army, took part in some killings.

A Congolese army spokesman confirmed the attack saying military forces had "killed four ADF rebels" but added that "the toll on the civilian side is very heavy".

Teddy Kataliki, the head of a prominent local civic group, also spoke of at least 22 victims.

"Yesterday the bodies of 10 civilians were found and today another 12," he said, adding that this was a provisional toll.

"We don't understand this situation which continues to bereave the region of Beni," he said.

He said another such attack was underway on Sunday evening in the town of Oicha, further south.

An army spokesman said troops were engaged in an operation in the area but refused to provide further details.