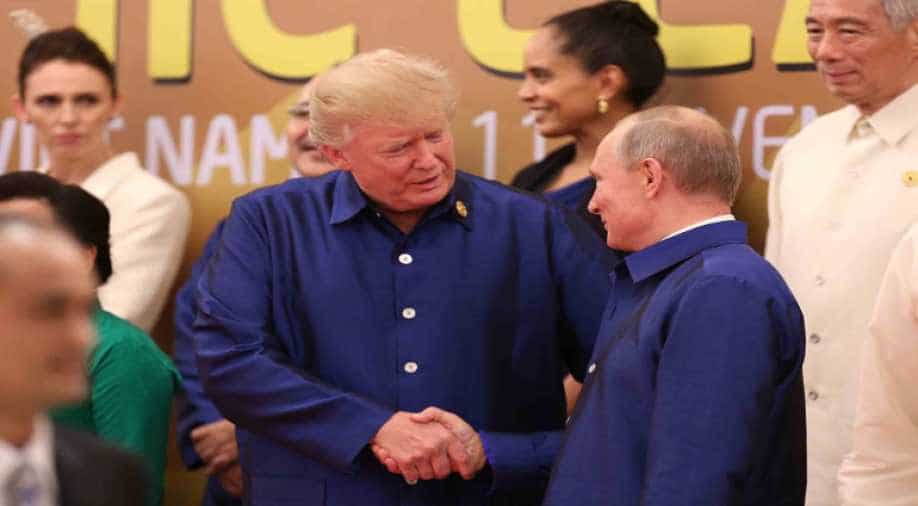 US President Donald Trump shakes hands with Russia's President Vladimir Putin as they pose for a group photo ahead of the Asia-Pacific Economic Cooperation (APEC) Photograph:( AFP )

The director of the CIA, however, said he stood by the US intelligence community's assessment that Russia did try to meddle in the election

President Donald Trump said Saturday he believes Vladimir Putin is being sincere when he denies meddling in the US election that propelled Trump to power, adding that the Russian leader felt "very insulted" by the allegations.

But in Washington, the director of the CIA said he stood by the US intelligence community's assessment that Russia did try to meddle in the election.

Trump, whose key former aides are under US investigation for possible collaboration with the Kremlin, said he repeatedly asked Putin about the claims during their chats at the APEC summit in the Vietnamese resort of Danang.

"He (Putin) said he didn't meddle. I asked him again," Trump told reporters on Air Force One as he flew to Hanoi for a state visit.

"You can only ask so many times...He said he absolutely did not meddle in our election," Trump said, adding he felt Putin seemed "very insulted" by the persistent accusations, which was "not a good thing for our country."

"I really believe that when he tells me that, he means it," added Trump, who is marking one year since his shock election victory.

In May, US intelligence chiefs told Congress that they agreed with their analysts' conclusion that Russia had meddled in the election.

And in January, 17 US intelligence agencies took the extraordinary step of stating publicly that they believed Russia did try to interfere in the election.

In a statement to CNN Saturday after Trump spoke, CIA director Mike Pompeo, who was appointed by Trump, said he still believes in that evaluation.

"The Director stands by and has always stood by the January 2017 Intelligence Community Assessment entitled: Assessing Russian Activities and Intentions in Recent US Elections. The intelligence assessment with regard to Russian election meddling has not changed," the statement read.

The US president's latest comments suggest he accepts Russia's staunch denials that the Kremlin played no part in helping him get to the White House allegations that continue to dog Trump's administration.

Some US lawmakers criticised Trump harshly for his statement.

Representative Adam Schiff, the senior Democrat on the House Intelligence Committee, said Trump "fools no one."

Schiff said Trump understands the Russians hacked into Democratic leaders' emails and dumped them, and used social media in a bid to hurt Hillary Clinton and help him win the election and divide the country.

"He understands all this and more," Schiff said in a statement. "He just doesn't understand how to put country over self. Or to put it in terms he is more familiar with — Mr Trump simply can't bring himself to put America first."

John McCain, a longtime Trump critic, added: "There is nothing 'America First' about taking the word of a KGB colonel over that of the American intelligence community."

Putin also addressed the allegations on Saturday after his meeting with Trump, describing them as a US "domestic political struggle."

"I think these are some sort of fantasies," he told reporters in Danang.

Trump's former campaign chairman Paul Manafort and an associate are under house arrest on charges unrelated to the election brought by special counsel Robert Mueller, who is investigating the allegations that the Trump campaign colluded with Russia.

Revelations by Facebook and Twitter that Russian-sponsored fake news flooded US social media during the election run-up have further deepened scrutiny on ties between the nations.

Trump and Putin met three times on the margins of the APEC summit, sharing warm handshakes and brief words.

The pair appeared to have struck a chummy tone, with Trump describing a "very good feeling" after the talks, and Putin remarking on the "well-mannered" former reality TV star.

Asked by reporters on Air Force One if he believed Putin, Trump said he was keen to move on to other issues.

"Look, I can't stand there and argue with him," Trump said. "I'd rather have him get out of Syria, I would rather get to work with him on the Ukraine."

The exchanges produced a rare common ground on the war in Syria, a bloody six-year conflict which has seen the US and Russia back competing factions.

In a joint statement, the leaders said there was "no military solution" to the war, an agreement that may mark a small step toward peace.

Trump also gave a loud airing to his "America First" rhetoric at the APEC summit.

In a speech on Friday, Trump said American jobs had been siphoned overseas by countries with cheap labour but little compunction to play by trade rules.

"We are not going to let the United States be taken advantage of any more," he said, adding his country would now use its economic might to cut favourable bilateral deals.

China's President Xi Jinping laid out a different narrative to the same hall, positioning the world's second largest economy at the heart of the future of global free trade as the US retreats.

As a first mark of a new trade era without the US as its pivot point, 11 Asia-Pacific countries on Saturday agreed to press ahead with the Trans Pacific Partnership (TPP) a major agreement abruptly abandoned by Trump at the start of the year.