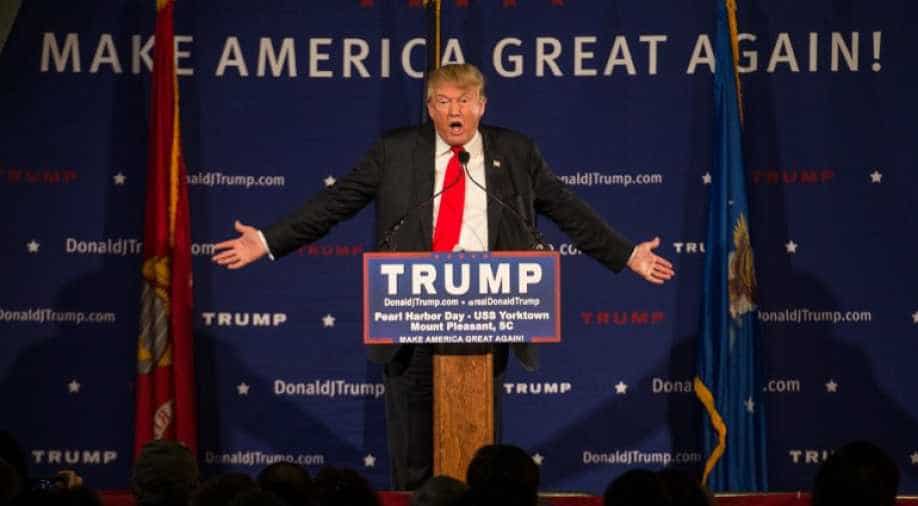 Trump reappeared minutes later to cheers from the crowd, declaring, 'Nobody said it was going to be easy for us.' Photograph:( AFP )

White House candidate Donald Trump was bundled off stage by security officers Saturday after an apparently false gun scare during a campaign appearance.

US media cited law enforcement sources reporting that no gun had been found after a cry of alarm in the crowd, and Trump swiftly resumed his speech in Reno, Nevada.

The 70-year-old Republican tycoon reappeared just minutes after being led away by three Secret Service officers, who shielded his body with their own.

#WATCH Donald Trump was rushed off stage during his Reno, Nevada campaign rally; one man escorted out in handcuffs by police. pic.twitter.com/YJb2i705wa

There were signs of a fracas in the audience as the agents led Trump away, but once a suspect was in custody Trump returned to resume his stump speech.

Television footage showed a suspect pinioned on the ground by officers and searched, before he was led away by local law enforcement, including an armed response team in tactical dress with rifles. The US Secret Service confirmed there was never a gun.

The Guardian says that man who was feared to have a gun claims to be a Republican supporter opposed to Trump. He held a sign that said "Republicans against Trump".

Initially, his sign elicited boos, "And then all of a sudden people next to me are starting to get violent; they're grabbing at my arm, trying to rip the sign out of my hand," he said. While he said he couldn't be positive, he it "it looked like Trump was pointing at him. Next, the crowd piled on him, he told the Guardian, kicking, punching, holding him on the ground and grabbing his testicles.

He used his training as a wrestler to turn his head to the side and keep his airway open, as a man was choking him in a headlock hold. "But there weer people wrenching on my neck they could have strangled me to death," he said.

Here is video of the detained man being taken away. It happened minutes after Trump was rushed from stage. Video provided to me by witness. pic.twitter.com/SisR9v539H

The candidate appeared unrattled and spoke with his usual self-confidence, finishing his planned remarks and accepting applause before returning to his campaign plane safely.

"I would like to thank the United States Secret Service and the law enforcement resources in Reno and the state of Nevada for their fast and professional response," he said in a campaign statement.

Eric Trump, Donald's son, retweeted a message saying "Hillary ran away from rain today. Trump is back onstage minutes after an assassination attempt". He appears to have deleted the retweet from his account. It was pointed out on CNN that there was no assassination attempt.

Trump campaign manager, Kellyanne Conway, attributed the speading of misinformation to Eric being "rattled", after seeing what appeared to be an attempt on his father's life. She herself had reiterated claims that the protester was a"democratic plant or operative".

Critics are scared about the Trump campaign's reaction to a peaceful protest:

Reporters at the venue had earlier cited unnamed local law enforcement sources and witnesses in the crowd as saying there had been a report of a gun among the Trump supporters.