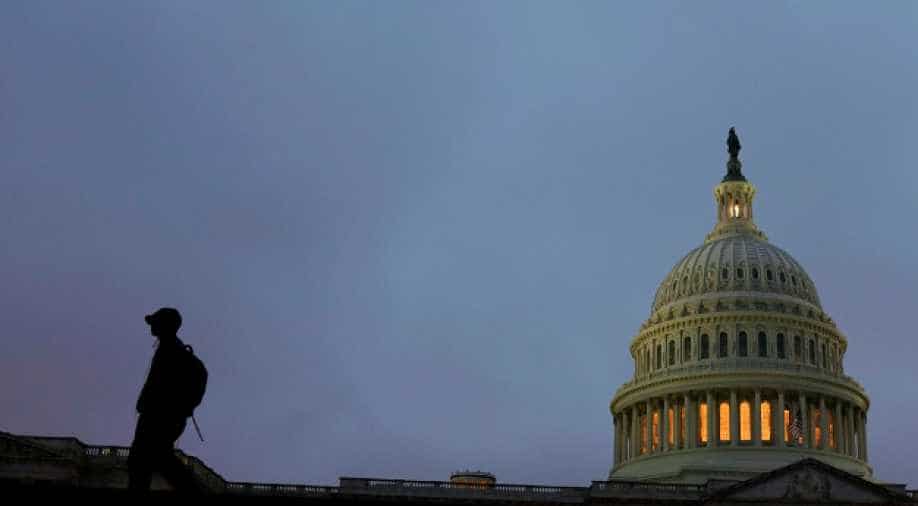 Republican leaders had planned to pass a temporary funding extension, known as a continuing resolution, until February 8

US President Donald Trump stood firm on Thursday after refusing to sign a stopgap spending bill because it does not contain border wall funding, leaving lawmakers scrambling to avoid a government shutdown before Christmas.

Trump's rejection of a measure that unanimously passed the Senate and was under consideration in the House plunged Washington into political chaos 36 hours before a midnight Friday deadline that sees funding expire for key agencies.

With so much talk about the Wall, people are losing sight of the great job being done on our Southern Border by Border Patrol, ICE and our great Military. Remember the Caravans? Well, they didn’t get through and none are forming or on their way. Border is tight. Fake News silent!

He appeared to harden his demand for $5 billion in funding for the wall on the US-Mexico border, something he has fought for since he began campaigning for president in 2015.

The Democrats, who know Steel Slats (Wall) are necessary for Border Security, are putting politics over Country. What they are just beginning to realize is that I will not sign any of their legislation, including infrastructure, unless it has perfect Border Security. U.S.A. WINS!

Republican leaders had planned to pass a temporary funding extension, known as a continuing resolution, until February 8, to allow time for debate about issues including border security.

But with ultra-conservative lawmakers and media personalities effectively demanding that the president stick to his campaign promise to fight for a border wall, Trump doubled down.

"I've made my position very clear. Any measure that funds the government has to include border security," he said at a White House event.

"Walls work, whether we like it or not," he added. "They work better than anything."

So far Democrats have refused to budge, saying they will not support a spending measure that funds Trump's wall.

"In terms of wall funding, that's a non-starter," said top House Democrat Nancy Pelosi. "I think they know that."

Fears of a shutdown - which could send thousands of federal employees home without pay just before Christmas - helped send US stocks tumbling, with the Dow closing down 2.0 per cent.

Trump had backed off his shutdown threat earlier this week, but it roared back to life as he accused Democrats of "putting politics over country" by not supporting a wall, which he insists will curb illegal immigration.

"What they are just beginning to realize," Trump tweeted about opposition Democrats, "is that I will not sign any of their legislation, including infrastructure, unless it has perfect Border Security."

Trump's move may have been influenced by members of the House Freedom caucus, some of whom have publicly called on the Republican president to stick to his guns on wall funding.

"Mr. President, we'll back you up," caucus chairman Mark Meadows said on the House floor late on Wednesday. "If you veto this bill, we'll be there."

Meadows, along with outgoing House Speaker Paul Ryan and other Republicans, met with Trump at the White House Thursday to discuss the path forward.

Ryan urged Congress to include border security measures in the funding bill but did not use the word "wall."

"We urgently need funding for border security and that includes a wall," she said.

Pelosi, Ryan's likely successor as speaker when Democrats reclaim the majority on January 3, meanwhile accused Republicans of having a "meltdown" over whether to pass the stopgap measure or force a shutdown.

And while House Majority Leader Kevin McCarthy expressed optimism that "there's still time" for Congress to cobble together a fix before breaking for the holidays, any new bill would face huge hurdles in the Senate.

Advancing a measure in the 100-member upper chamber takes 60 votes. Republicans control 51, and getting nine Democrats to support $5 billion in wall funding is a virtual non-starter.

The news of Trump's rejection caught many lawmakers flat-footed.

"Are you ruining my life?" Republican Senator Susan Collins joked to The Hill when informed of Trump's decision, adding that she does not believe there are sufficient votes to pass a modified continuing resolution to get through Congress.

Democrats sounded flabbergasted that Republicans -- who currently control the White House, the House and the Senate -- might allow key funding to lapse.

"If the government shuts down, make no mistake -- this will be the Trump shutdown," congressman Dan Kildee said. "This is no way to run the corner grocery store, let alone the government of the United States."

The US government endured two brief shutdowns in early 2018. A far more crippling shutdown lasted for 16 days in 2013, when about 800,000 federal workers were furloughed amid a fight over funding Barack Obama's health care reforms.