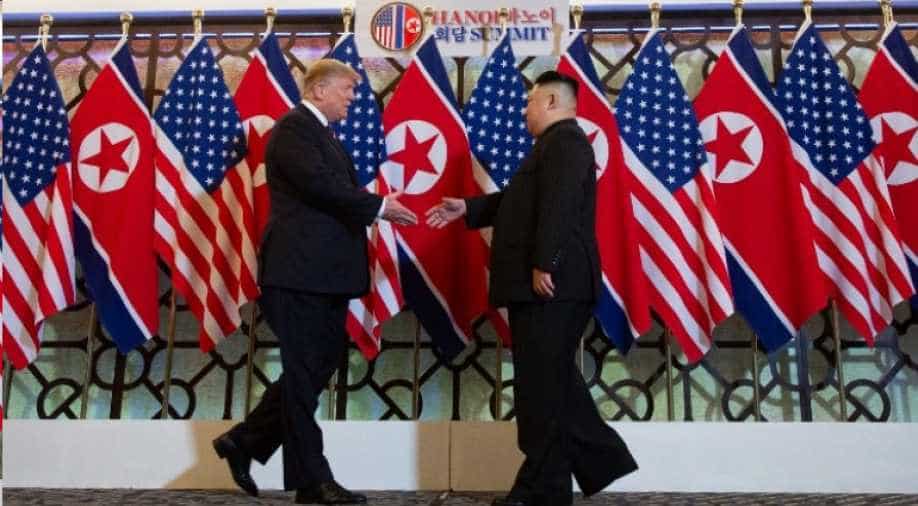 The two-day get-together follows up on the leaders' initial historic meeting in Singapore in June, where Trump launched his charm offensive to try and get Kim to give up his nuclear arsenal.

US President Donald Trump and North Korean leader Kim Jong Un smiled, shook hands and dined Wednesday in Hanoi, expressing optimism that their highly personal brand of diplomacy will lead to a deal on the totalitarian state's nuclear weapons.

At the start of around two hours of talks and dinner at a luxury hotel in the Vietnamese capital, Trump predicted a "very successful" summit, due to resume Thursday and end in a still unspecified signing ceremony.

The two-day get-together follows up on the leaders' initial historic meeting in Singapore in June, where Trump launched his charm offensive to try and get Kim to give up his nuclear arsenal.

Shaking hands and smiling in front of a bank of a dozen alternating US and North Korean flags, they briefly took questions from reporters before starting one-on-one talks, then the dinner.

Critics said the Singapore summit was light on concrete results but Trump said the Hanoi talks would be "equal or better than the first" time. Kim said: "I am certain that a great outcome will be achieved this time that will be welcomed by all people."

The White House said that on Thursday Trump and Kim will meet again one-on-one, before continuing talks alongside advisers throughout the morning.

This will culminate in a "Joint Agreement Signing Ceremony," the White House said without providing further detail.

A press conference is also scheduled before Trump returns to Washington.

But the president has been dogged by scandal at home, where his former lawyer Michael Cohen described him as a "conman" in nationally televised testimony to Congress starting shortly after Trump finished Wednesday's negotiations on the other side of the world.

Asked by reporters if he had any reaction to Cohen's bombshell testimony about hush money payments and murky business dealings in Russia, Trump simply shook his head.

Seeking a big foreign policy win to push back against domestic troubles, Trump believes he can make history with North Korea and claims Japan's prime minister has already nominated him for a Nobel Peace Prize.

His goal is to persuade Kim to dismantle his nuclear weapons and resolve a stand-off with the deeply isolated state that has bedevilled US leaders since the end of the Korean war in 1953.

To lure Kim into radical change, Trump is believed to be considering offering a formal peace declaration -- though perhaps not a formal treaty -- to draw a line under the technically still unfinished war.

At the same time, Washington faces mounting pressure to extract significant concessions from Kim, who has so far shown little desire to ditch his nuclear capability.

Washington and Pyongyang disagree even on what denuclearisation means precisely. And while North Korea has now gone more than a year without conducting missile and nuclear tests, it has done nothing to roll back the weapons already built.

From insults to love

A former real estate tycoon who often boasts he is one of the world's best negotiators, Trump is pitching a vision of North Korea as a new Asian economic tiger if it surrenders its nuclear status.

He said the country could quickly emulate the summit's host, Vietnam -- a communist state once locked in devastating conflict with the United States, but now a thriving trade partner.

And Trump has invested himself personally in the relationship with Kim, creating the diplomatic equivalent of a Hollywood odd-couple bromance.

Before Singapore, they were slinging bizarre insults -- Trump calling Kim "rocket man" and Kim calling him a "dotard."

With North Korea then busily testing missiles and conducting underground nuclear tests, analysts feared the duo were egging each other on towards a catastrophic confrontation.

Now, Trump talks of "love" and claims that his ground-breaking policies defused the threat posed by Kim.
Critics warn Trump is so keen to score a deal that he could give away too much, too quickly, endangering US allies South Korea and Japan.

In Singapore, Trump took his own generals by surprise when he announced a suspension of military exercises with the South -- something the North badly wanted.

Washington would ideally like Kim to dismantle a key nuclear facility at Yongbyon, allow in international inspectors, or even hand over a list of all his nuclear assets -- something the North Koreans have categorically refused to do.

In return, Trump is believed to be considering dangling relief from tough international sanctions. Opening diplomatic liaison offices is another possible US concession.

Another possibility is a joint declaration to end the Korean War -- a hugely symbolic gesture which some analysts fear would upset the delicate power balance in a region where the US and China are already struggling for influence.

Those pushing for a scaled-back US foreign policy footprint around the world would welcome the gambit.

"If you get an end of war declaration, I think that's really important symbolically because it starts to change the mentality," Daniel Davis, at the conservative Washington-based Defense Priorities think tank, told AFP.

And Trump deserves credit, he said.

"You just can't ignore the fact that he's the only one of the last nine American presidents that has even gotten to this point. No one else has even had the conversations, no one else has had these summits."