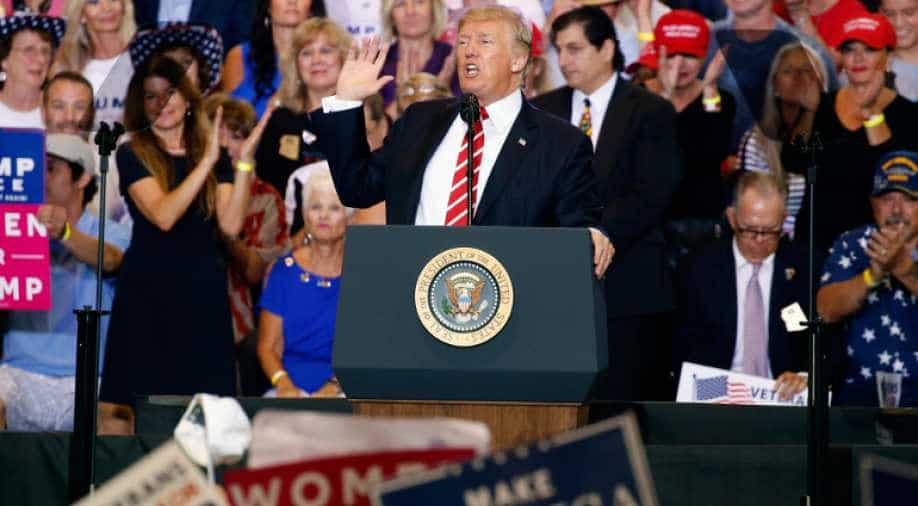 Trump said his words in the aftermath of Charlottesville had been 'perfect'. Photograph:( Reuters )

President Donald Trump, surrounded by thousands of supporters on Tuesday, defended his response to the violence at a rally organised by white supremacists in Charlottesville, Virginia, and attacked the media for "giving a platform to hate groups."

Trump told the friendly crowd at the political rally in Arizona that his words in the aftermath of the Virginia event had been "perfect."

He revved up the crowd with criticism of journalists, who he said did not report what he had said. Many in the crowd turned and pointed at reporters in the room. Some chanted "CNN sucks."

Trump revved up the crowd with criticism of journalists, who he said did not report what he had said. Many in the crowd turned and pointed at reporters in the room. Some chanted 'CNN sucks'

Trump also suggested he might pardon Joe Arpaio, a former sheriff of Maricopa County, Arizona, who was found guilty last month of criminal contempt for violating the terms of a 2011 court order in a racial profiling case.

Arpaio, 85, lost a re-election bid last year in the county.

"Do the people in this room like Sheriff Joe?" Trump asked, sparking loud applause and a chant of "Pardon Joe!"

"Was Sheriff Joe convicted for doing his job?" Trump asked, before predicting that Arpaio would be just fine. "I won't do it tonight because I don't want to cause any controversy," he said.

White House spokeswoman Sarah Sanders told reporters travelling with Trump on Air Force One earlier on Tuesday: "There will be no discussion of that today at any point and no action will be taken on that front at any point today."

Trump drew broad criticism for blaming both white nationalists and counter-protesters for the deadly violence at the Charlottesville rally, which was organized by neo-Nazis and white supremacists. One woman was killed.

Protesters outside Tuesday's rally yelled: “Shame, shame, shame” and “No Trump, No KKK, No fascist USA” as the Trump supporters began filing into the Phoenix Convention Center.

Supporters, who lined up for hours in the Arizona heat ahead of the event, chanted: “Build the wall,” a reference to Trump's pledge to erect a wall on the U.S. border with Mexico.

Trump has held a series of 2020 re-election campaign stops despite only having taken office in January.

Phoenix Mayor Greg Stanton, a Democrat, had asked him to postpone Tuesday's event, scheduled for 7 p.m. MST (0200 GMT Wednesday), while the nation healed from outrage and division after the deadly rally in Charlottesville.

Neither John McCain nor Jeff Flake, Arizona's senators, was expected to attend the Phoenix event, said a source familiar with Flake's re-election campaign and published reports, underscoring Trump's fractious relationship with some in his own party.

Republican Governor Doug Ducey told the Arizona Republic on Monday that he would welcome Trump on the tarmac when he arrived but would not attend the rally.

Before flying to Phoenix, the state capital, Trump landed in Yuma, Arizona, near the Mexican border, for a tour of border security facilities. He is seeking congressional funding for the wall he wants built along the border to deter illegal immigration..

A heavy police presence deployed around the Phoenix venue.

Some White House officials privately expressed concern on Monday about Trump's Phoenix rally, fearing he might revisit the Charlottesville issue in the heat of the moment while cheered on by supporters.

"The president is always welcome in Arizona," Flake spokesman Will Allison said in an emailed statement.

Earlier this summer, Flake published a book questioning the direction of the Republican Party in the Trump era, making him one of the few party members willing to criticize the president.

The president has also made caustic remarks about McCain, the 2008 Republican presidential nominee and war hero, who is battling cancer. A spokesman for McCain could not be reached immediately.

The Phoenix event is Trump's first trip as president to Arizona, which he won in the 2016 election.

Police use gas to disperse protesters outside Trump rally in Phoenix

"People in the crowd have begun throwing rocks and bottles at police. They also dispersed some gas in the area," Phoenix Police Department spokesman Sergeant Jonathan Howard said.

"Police have responded with pepper balls and OC (oleoresin capsicum) spray in an attempt to disperse the crowd and stop the assaults," he said.

Police have not given an estimate of the number of protesters who turned out for the event, but Arizona media said there were several thousand people.

Media reports said some protesters had thrown bottles at police.