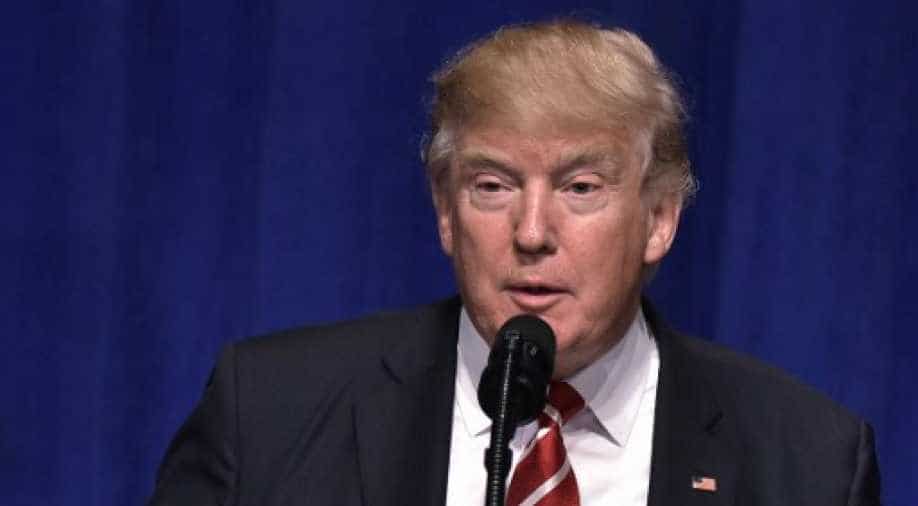 Donald Trump has been on the blackfoot ever since a Seattle court suspended the ban on refugees and travelers from seven Muslim-dominated countries, including Iran and Syria. Photograph:( AFP )

The 70-year-old also trained his guns on the media for trying to downplay the threat posed by travellers and refugess from Iran, Syria, Somalia, Sudan, Iraq and Yemen.

While the ban was suspended by a Seattle court on Friday, the US government appears unwavering its efforts to implement the executive order signed by Trump on January 27 despite two new polls showing that a majority of Americans are against the imposition of the ban.

Trump took to Twitter to slam the national media: "Any negative polls are fake news, just like the CNN, ABC, NBC polls in the election. Sorry, people want border security and extreme vetting."

He also spoke about the risks involved in letting Muslims from the seven countries enter the country.

"Radical Islamic terrorists are determined to strike our homeland as they did on 9/11, as they did from Boston to Orlando to San Bernardino, and all across Europe," the president later told military personnel.

Incidentally, none of the 9/11 attackers had any connection to the seven countries that have been blackballed by the current administration.

The legal battle has moved to San Francisco, where a US court of appeals gave the administration until Monday evening to submit a brief defending the decision.

Trump's decree slapped a blanket ban on entry for nationals of the seven mainly-Muslim countries for 90 days and barred all refugees for 120 days. Refugees from Syria were blocked indefinitely.

The president says the ban is needed to tighten US security against foreign terror threats, citing the September 11, 2001 attacks despite the hijackers having no links to the named countries.

But Friday in Seattle, a federal district judge ordered the temporary nationwide suspension of the president's order, allowing the many travellers who were suddenly barred from US soil to start trickling back in.

The appeals court in San Francisco on Sunday refused to overrule the federal judge, and ordered the Trump administration to present a brief by 2300 GMT on Monday.

The attorneys general for the states of Washington and Minnesota, which won the temporary stay of the ban, have asked the appeals court to refuse to reinstate it. They were backed Monday in a court brief filed by 16 other US states.

And in an additional blow, a slew of Silicon Valley giants led by Apple, Facebook, Google, Microsoft and Twitter have filed a legal brief in support of the lawsuit.

The 97 companies speaking out against Trump's travel ban said it harms recruiting and retention of talent, threatens business operations, and hampers their ability to attract investment to the United States.

A group of prominent Democrats including former secretaries of state John Kerry and Madeleine Albright added their voices to the criticism on Monday, in a filing to the San Francisco appeals court.

Spicer insisted the administration was "absolutely not" thinking about withdrawing its order. On Trump's plan to introduce extreme vetting at US borders, he said: "Once we win the case, it will go right back into action."

But top Republicans have also shown renewed signs of discomfort with the president as the controversy escalates, with Senate Majority Leader Mitch McConnell chiding Trump on Sunday for attacking the judge who suspended the ban.

"I think it is best to avoid criticizing judges individually," he said on CNN.

Trump had blasted Judge James Robart in a series of angry tweets.

"Just cannot believe a judge would put our country in such peril. If something happens blame him and court system. People pouring in. Bad!"

With the ban suspended, travelers from the targeted countries holding valid visas have begun arriving on American soil.

In New York, 33-year-old Sudanese doctor Kamal Fadlalla rejoiced -- after a week blocked in his home country, he was back in the Big Apple with friends and colleagues.

"It feels great," Fadlalla told AFP on Sunday at John F. Kennedy International Airport. "It was a tough week actually."

"I am so grateful to all the lawyers and others that helped me," she said tearfully.

The State Department has said visa holders from the seven countries are allowed to travel to the US as long as their documents have not been "physically canceled".