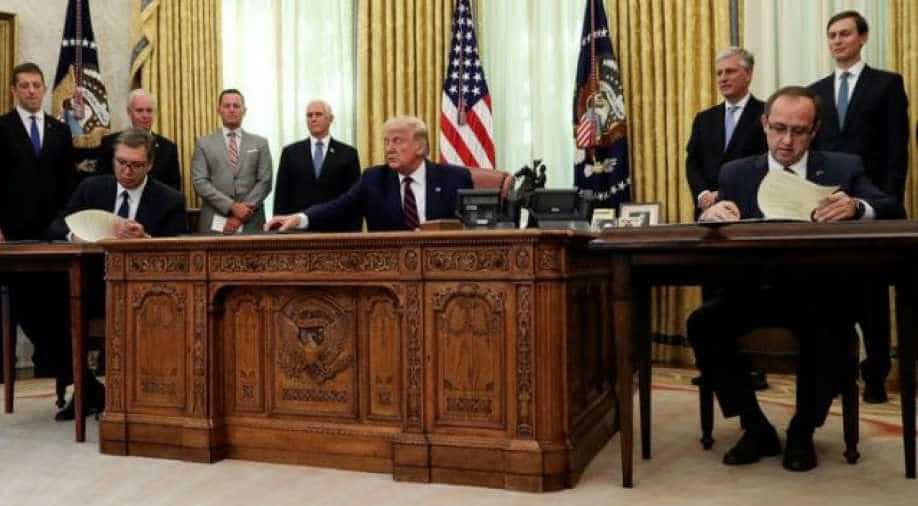 Trump said that he looks forward to seeing Serbia and Kosovo prosper as "we work together on economic cooperation in the region going forward."

Former foes Kosovo and Serbia have agreed on a historic pact to normalise economic relations, US President Donald Trump announced Friday at the White House.

"Today, I am pleased to announce yet another historic commitment. Serbia and Kosovo have each committed to economic normalisation," Trump said, with Kosovo Prime Minister Avdullah Hoti and Serbian President Aleksandar Vucic sitting beside him in the Oval Office.

He was accompanied by President Aleksandar Vucic of Serbia and Prime Minister Avdullah Hoti of Kosovo.

Moments later, the two leaders along with the President Trump signed the agreements.

Trump said that he looks forward to seeing Serbia and Kosovo prosper as "we work together on economic cooperation in the region going forward."

Although most of Kosovo is ethnically Albanian, many Serbs consider it their native homeland and a cradle of their culture. Some 13,000 people were killed in the 1998-1999 war, sparked by clashes between the forces of the rump Yugoslav state - Serbia and Montenegro - and Kosovo separatists. The conflict ended when NATO carried out an air campaign against Serbia.

Kosovo unilaterally declared independence in 2008, but Serbia and its ally Russia have yet to recognise its sovereignty.

"After a violent and tragic history and years of failed negotiations, my administration proposed a new way of bridging the divide. By focusing on job creation and economic growth, the two countries were able to reach a real breakthrough on economic cooperation across a broad range of issues," Trump said.

The agreement is expected to be limited to the normalisation of some economic ties, including possibly opening up road, rail and air links between the former Balkan war foes.

Although the European Union has been trying without success for nearly a decade to thaw a bitter relationship between Serbia and its former territory, which declared independence in 2008, an effort focused on business and commerce was launched more recently by US officials.

But Serbia made clear during the talks that they would not go as far as recognizing Kosovo as a fully-fledged state.

During the signing ceremony, President Vucic said that Trump had done a "great job" and praised his commitment to the region.

Inviting him to Serbia, he said that Trump would be the first US President since Jimmy Carter visited the country in 1980.

Prime Minister Hoti termed it as a huge step forward.

Terming it as a historic day, National Security Advisor Robert O'Brian said the focus is on economic cooperation.

Vice President Mike Pence said that this is an important step for peace in the Balkans.
Senator Ron Johnson from Wisconsin said that people from the two countries would see the benefit of economic agreement.

The two countries remain bitter over a bloody war fought two decades ago, in which 13,000 died.