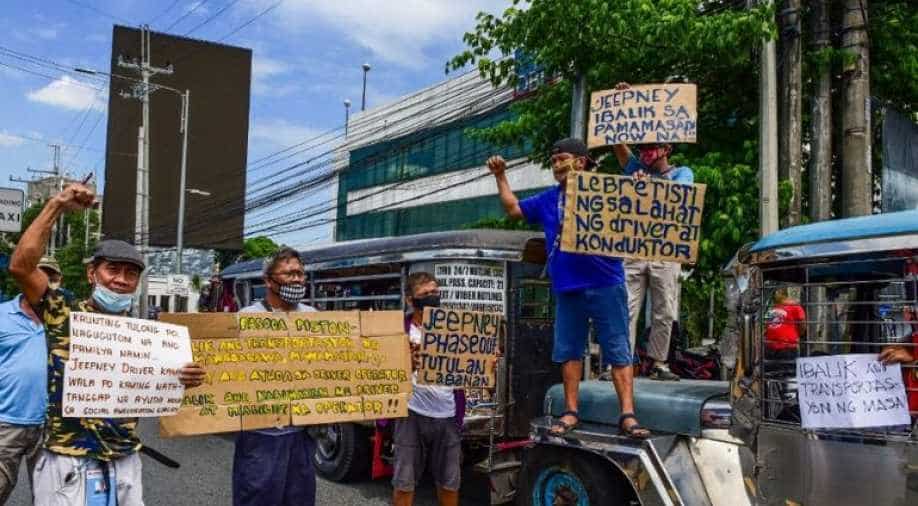 Jeepney, a popular public transport, drivers chant slogans during a protest in Quezon city in the metro Manila area on June 1, 2020, Photograph:(AFP)
Follow Us

Traffic jams, honking, taxis, and ride-sharing were seen on the streets of Manila on Monday as the Philippines relaxed one of the world's longest lockdown from the capital city.

However, the vehicles are allowed to operate only a fraction of their capacity.

Also read | Home quarantine no option for thousands in Philippines

Public transport also did not resume its full services and many commuters waited for hours to get their ride. There were long queues as the country's major mode of transportations are still not allowed to return on roads.

Haircutting shops and salons will reopen next week and be allowed to work with only a third of their capacity, but, schools will remain closed for another two weeks.

Under the new relaxations, most of the workers will be allowed to go to work, however, they will still be encouraged to work from home.

On May 28, President Rodrigo Duterte announced the reopening of non-essential services in Manila after nearly 80 days in a bid to restart the economy.

Manila is the epicentre of coronavirus in the country and is under lockdown since mid-March.