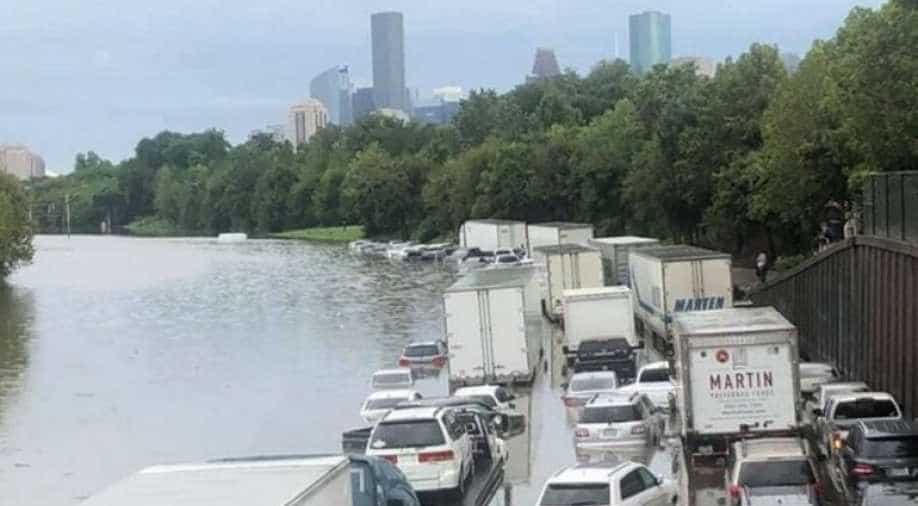 A picture of the flooding shared by Houston Police Chief Art Acevedo on Twitter. Photograph:( ANI )

The National Hurricane Centre said in a late Thursday bulletin that up to 45 inches of rain would have fallen in some areas by the time the storm blows off on Friday afternoon.

Heavy rains had abated by Thursday evening, although flash flood watches remained in effect through Friday morning and rescuers were still working to reach stranded motorists and those trapped in homes late into the night as floodwaters were slow to drain off.

The National Hurricane Centre said in a late Thursday bulletin that up to 45 inches of rain would have fallen in some areas by the time the storm blows off on Friday afternoon.

Ed Gonzalez, the sheriff of Harris County, which includes Houston, confirmed the second death from the storm.

He tweeted on Thursday that he was at the scene where first-responders tried to save a man who had driven his white van headlong into deep waters.

"The water level was about 8 feet high," Gonzalez wrote, describing the incident. "The driver paused briefly, then accelerated into it the water, causing his van to go under", he added.

Gonzalez said that the man driving the van was pulled from the vehicle after some 20 minutes underwater and was later pronounced dead at a hospital.

The other victim of the storm was electrocuted southeast of Houston while trying to move his horse to safety, according to a statement on the Facebook page of the Jefferson County Sheriff's Department. No other details were provided.

George Bush Intercontinental Airport halted all flights for about two hours, and Governor Greg Abbott declared a state of disaster covering more than a dozen counties.

Hundreds of motorists were stranded in their vehicles as some of Houston's main roadways flooded, submerging cars. Firefighters, police and ordinary citizens were out in boats and all-terrain vehicles to pick up people trapped in their homes by the rising waters.

The storm knocked out power of around 100,000 people in Houston and southeast Texas, according to reports from energy companies, while work at oil refineries in the area was slowed or halted.

Houston Mayor Sylvester Turner said that the city was better prepared to rescue stranded residents and deal with flooding than when Hurricane Harvey had hit in 2017, leading to dozens of deaths in Houston and billions of Dollars in damage.

The small town of Winnie, about 100 km east of Houston, was also badly hit. Officials there evacuated Riceland Hospital and tried to rescue people marooned in their vehicles after roads turned into lakes.

Parts of Interstate 10, a major east-west highway, were closed near Winnie.

Imelda made landfall as a tropical storm near Freeport, Texas, on Tuesday.