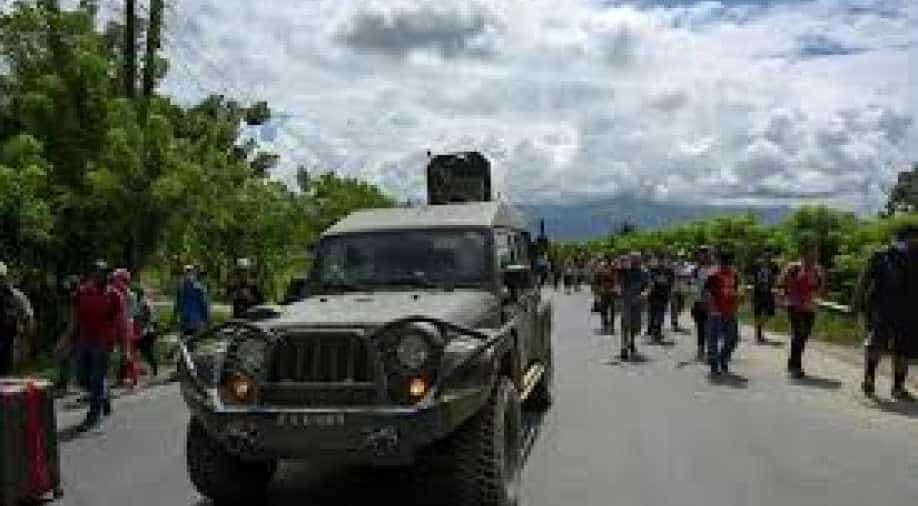 Carrying backpacks and plastic bags, the migrants pushed past two lines of Guatemalan soldiers at the Entre Rios border crossing and continued north -- defying the risks and restrictions linked to the coronavirus pandemic.

Thousands of mostly Honduran migrants bound for the United States surged across the border into Guatemala on Thursday, just weeks before a tense American presidential election where immigration is a key issue.

Carrying backpacks and plastic bags, the migrants pushed past two lines of Guatemalan soldiers at the Entre Rios border crossing and continued north -- defying the risks and restrictions linked to the coronavirus pandemic.

However late Thursday Guatemalan President Alejandro Giammattei, in an address to the nation, ordered the Hondurans detained and sent back to their home country.

However he urged them to "please return" voluntarily to their country.

Guatemalan Migration Institute officials said some 3,000 people had crossed the border without submitting to a Covid-19 test, required for foreigners entering the country.

Many were not wearing masks to protect against the spread of infection.

Giammattei said that "a massive group of Hondurans violently broke in" at the border town of Corinto, in Izabal province.

"Amid the current health emergency, not only did they fail to respect measures to enter the country but also health measures established to protect our citizens," he said.

The priority for the Honduran migrants however was getting to the United States, where they would somehow seek refuge.

"We're not thinking about the pandemic, it's the last thing on our minds," 20-year-old Jefrey Amaya told AFP, part of a group of young people from El Negrito, in Honduras' Yoro department.

Amaya said he had joined the caravan after seeing a message on social media.

Soldiers handed out water to passing migrants, some of whom applauded the troops for allowing them to pass.

Dozens of migrants hitched a ride on the back of a large flatbed truck as they headed toward Mexico.

Just a few miles into Guatemala a Honduran migrant died when he fell from a moving truck.

In recent years, thousands of Central American migrants traveling in large groups have crossed into Mexico, with the aim of reaching the US border.

The caravan is headed north just a month before the US presidential election, in which President Donald Trump -- whose hard line against migrants is a central plank of his policy platform -- is seeking a second term.

Trump has threatened Mexico with steep US tariffs if it does not do more to stop a surge of undocumented migrants, and President Andres Manuel Lopez Obrador has since deployed some 26,000 troops to the country's borders in response.

Trump's administration on Thursday announced the US will admit a record low of 15,000 refugees in the coming year.

His Democratic rival in the November 3 election, Joe Biden, has pledged to raise the refugee cap to 125,000, saying that welcoming the persecuted is in line with US values.

Guatemala opened its borders last week after a six-month closure to prevent the spread of the coronavirus, which has hit Central American countries hard.

Some of the migrants said they recognized the risks of catching the coronavirus while on the move, but were prepared to take the risk to escape from high levels of poverty and violence in Honduras.

Monica Toruno, 36, had joined the caravan with her six-year-old son, who uses a wheelchair, and a niece. She said she was forced to leave Honduras because of unemployment and violence.

"I never thought I would subject my son to this, but I lost my job because of the coronavirus, and I'm afraid of staying," Toruno said.

"We are going in search of the American dream, no one will stop us. Either we die here from Covid-19 or we die of hunger. Governments are doing nothing to create jobs," another migrant, 27-year-old Miguel Artiga, told AFP.

The vast majority of the migrants on the move are young men. Few women and children were seen.

According to the government of Honduran President Juan Orlando Hernandez, 31,022 Hondurans had been deported back to their home country as of last week, most of them from Mexico and the United States, with the remainder from Guatemala.