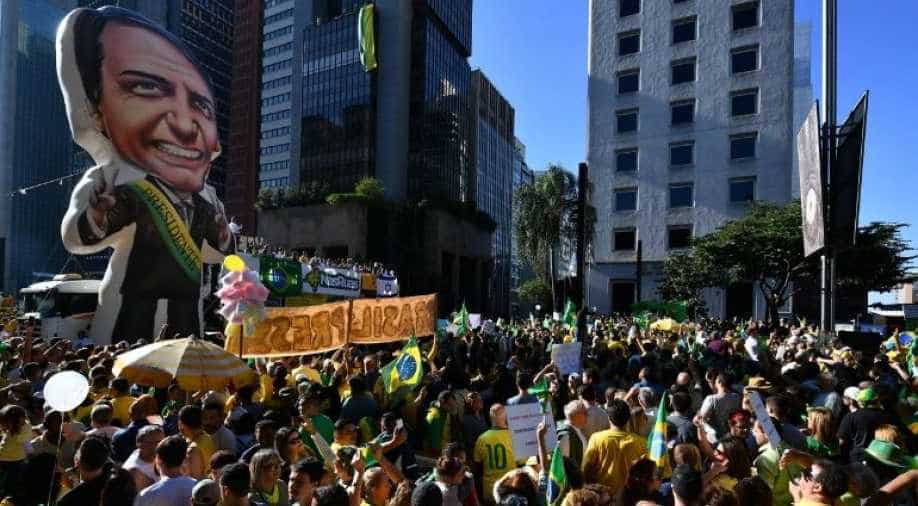 His supporters blamed 'satanic manoeuvres' by the head of the lower house, Rodrigo Maia, for stalling the reform.

Thousands of supporters of far-right President Jair Bolsonaro took to the streets across Brazil Sunday in a protest seen as a gauge of the embattled leader's popularity only five months into his term.

Waving Brazilian flags and chanting Bolsonaro's nickname "Mito" or "Myth," protesters wearing T-shirts emblazoned with "My party is Brazil" demanded lawmakers speed up approval of the government's signature pension reform, which has stalled in Congress.

His supporters blamed "satanic manoeuvres" by the head of the lower house, Rodrigo Maia, for stalling the reform.

Bolsonaro, who was in Rio for a family wedding and had previously announced that he would not to take part in the demonstrations, shared pictures and videos of the protests on Twitter.

"Most of the people came out on the streets with legitimate, democratic concerns," he tweeted.

"Politicians have to understand that Brazil does not belong to them," the 50-year-old told AFP.

At a demonstration in Brazil's biggest city of Sao Paulo, Andre Santos told AFP, "There's no point wasting more time, they have to approve it."

The protests, organized by Bolsonaro's most hard-line supporters, are aimed at shoring up the ultraconservative government as it faces growing opposition.

Tens of thousands of students and teachers took to the streets on May 15 to protest against the government's plans to freeze 30 per cent of discretionary spending for public universities in the second half of the year.

His controversial order earlier this month permitting millions of Brazilians to carry loaded weapons in public has fuelled anger, sparked a legal challenge and added to his woes in Congress, where his relations with key leaders such as Maia had already deteriorated.

Bolsonaro's ambitious overhaul of Brazil's pension system -- which he has warned will bankrupt the country if his proposal is not approved -- is seen as key to getting a pipeline of economic policies through Congress.

But the changes to Brazil's retirement age and benefits are facing resistance in the lower house of Congress, where Bolsonaro's ultraconservative Social Liberal Party has only around 10 per cent of the seats.

Economy minister Paulo Guedes, who is spearheading the government's reform agenda, threatened Friday to resign if the pension bill was not passed or was watered down.

"We will not have money to pay officials, it will be chaos in the public sector," Guedes told Veja magazine. "Reform is urgent."

The government's proposal is designed to yield savings of around one trillion reais (roughly $250 billion) over a decade, but analysts expect the actual amount will be more like 500-700 billion reais by the time the bill is approved later this year.

The pension bill is one of several economic reforms seen as crucial to helping Brazil reduce its massive public debt burden, which the International Monetary Fund said Friday was 88 per cent of GDP -- one of the largest among its peers.

Official data this week is expected to show that Latin America's biggest economy, which is still struggling to recover from the devastating 2015-2016 recession, contracted in the first quarter.

Some of the protesters in Rio called for "military intervention" as in 1964 when a military coup ushered in decades of army rule in Brazil.

Others expressed more sober demands, such as "Let's help our president rebuild our Brazil."

"I am here for the pension reform, which will be good for the poor," said Janelsa Salomao, 59, in Rio. "Those who do not want it are corrupt."