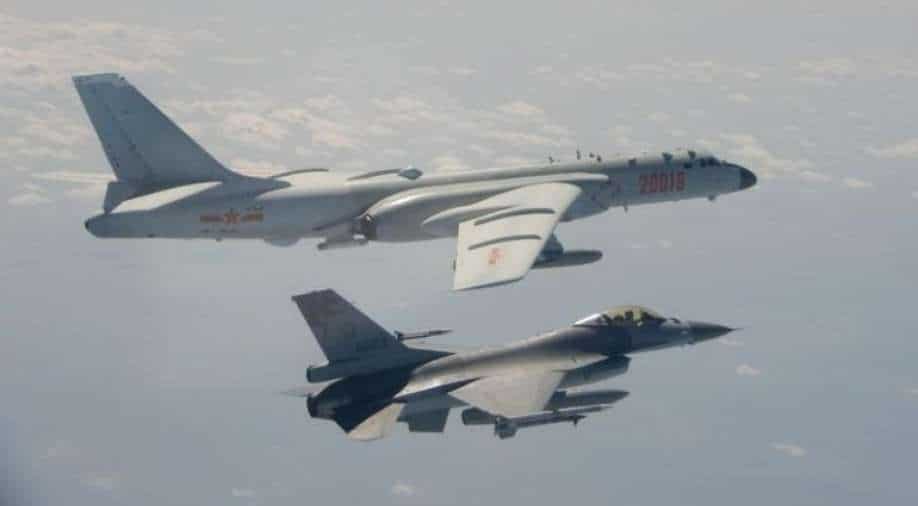 An H-6 bomber of Chinese PLA Air Force flies near a Taiwan F-16 in this February 10, 2020 handout photo provided by Taiwan Ministry of National Defense. In a statement, the ministry said Chinese J-11 fighters and H-6 bombers flew into the Bashi Channel to the south of Taiwan, then out into the Pacific before heading back to base via the Miyako Strait. Photograph:( Reuters )

"Their intention is to slowly exhaust, to let you know that we have this power," Taiwan's defence minister said, adding, "our national forces have shown that, while you may have this power, we have countermeasures."

China considers Taiwan as its breakaway province which it says will one day be unified with the mainland by force if necessary.

Also Read in Pics: This is China's anti-submarine aircraft which targets Taiwan

The F-16V with its advanced radars and sophisticated weapons system is seen as a weapon of choice against China's heavy arsenal. The Chinese foreign ministry hit out against the move saying the US should not give "wrong signals to separatist forces".

Meanwhile, reports said Baltic lawmakers comprising of Latvia, Lithuania and Estonia met with President Tsai Ing-wen as Taiwan continues to build international relations with other countries. Taiwan currently has diplomatic relations with only 14 countries including the Vatican.

The lawmakers attended the "Open Parliament Forum" in Taipei as the Baltic leaders pledged support for Taiwan's democratic principles.

Lithuania had earlier attracted China's ire after Taiwan opened an office which functioned as a de facto embassy as the Xi regime quickly moved to downgrade diplomatic ties with Lithuania.