With Israel in between, are Indians and Palestinians looking at an estranged friendship? 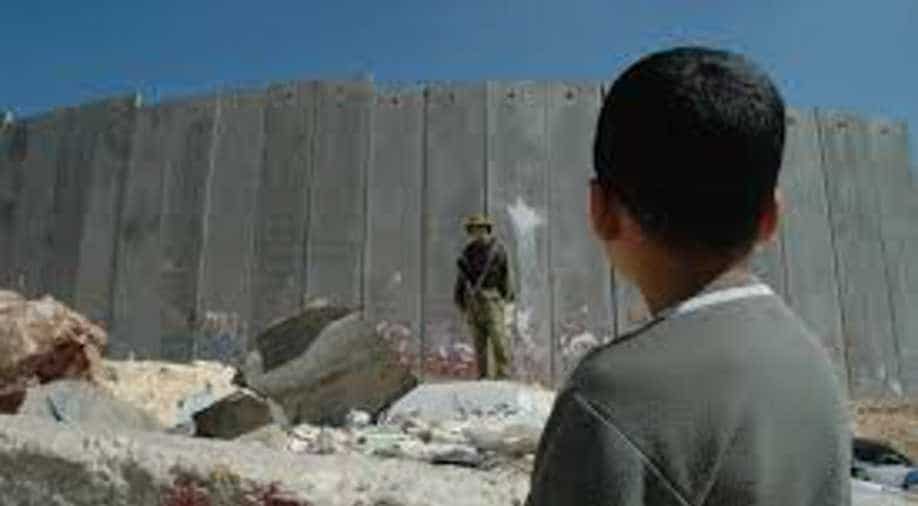 Assessment carried out by the UNICEF revealed severe psychosocial distress among children living in the 35 hardest-hit areas of Gaza Photograph:( Others )

Clad in white suit and spoting a blue hankerchief, Prime Minister Modi looked elegance personified when he landed in Israel yesterday. His dress, interestingly, bore clear resemblance to the Israeli flag. The world by this time know that the long frosty relationship between India and Israel is about to melt. In the name of countering terrorism, in the name of development and in the name of standing against anti-semitism, the two countries are all poised to collaborate on strategic and technical matters.

But when everything looks so warm and fuzzy, nagging questions keep coming back: has India's stand on the Palestine questioned changed? Are we not supporting the aspirations of the Palestinians any more? Not a single time in the last two days have the national media, PM Modi, and the Ministry of External Affairs mentioned Palestine. The silence is so deafening that we can't but wonder whether very surreptitiously India is deserting the Palestine cause in the promise of a new partnership with Israel.

Prime Minister Modi is a technocrat; he believes in delivering, in building infrastructure, in separating good governance from the messiness of electoral politics. Palestine is all messy: no clear political leadership, not economically promising, people housed in shoddy refugee camps. The country has nothing to offer to an aggressively growing economy like India. Plauged by constant terrorist threats, cyber attacks and farming problems, India needs Israel more than Palestine as an ally.

The country has nothing to offer to an aggressively growing economy like India. Plauged by constant terrorist threats, cyber attacks and farming problems, India needs Israel more than Palestine as an ally

While the diplomatic and strategic needs of India are clear, the doubts that continue haunt us is, whether in the name of development and security, India is giving up on the moral leadership that constituted the core of its foreign relation in the past.

If India aspires to a position of global power, such a stature does not come with economic prowess alone. Diplomatic relations are based on negotiations and not necessarily on keeping mum on differences. It is not that Israel alone has lot to offer to India, the latter also has lot to offer in terms of technological manpower, market, investment and in fighting jointly against terrorism.

India could have used these as leverages to bring up the miserable state of Palestinians who live as refugees in their own country.

The United Nations have been very forthright about the state of Palestinians in Israel.

The number of Palestinian houses demolished in 2016 has doubled compared to 2015. The UN secretary-general Ban Ki-moon, in his message on the International Day of Solidarity with the Palestinian People, has called Gaza to be a “humanitarian emergency”. Two million people are struggling every day in Palestine, clueless as to when their sojourn for nationhood would come to an end. Palestinians are mostly jobless in an economy that is for decades paralysed due to ongoing conflicts.

It is ironical that the UN adopted the solidarity resolution the same day, that is, 29 November, 1977 as it did 30 years earlier when it adopted the resolution on the partition of Palestine. The resolution came as the UN General Assembly expressed deep concern at the continous occupation of Arab territories by Israel, leading to what they saw as the deprivation of inalienable rights of Palestinians.

Two million people are struggling every day in Palestine, clueless as to when their sojourn for nationhood would come to an end.

Over the years, Edward Said and several other writers and commentators on the Israel-Palestine conflict have interpreted the situation in Palestine as a struggle to achieve social justice which takes us beyond the narrative of military occupation, resistance and counter-terrorism measures.

Said, the most famous of Palestine-US scholars supporting the Palestine cause, has proposed that “cultural exchange” is necessary between all parties concerned to promote understanding. The only way to achieve peace, Said argued, will be to minimise the existing gap in communication between the US and the Arab world, and between Israel and their Arab neighbours.

Such cultural exchanges and opening up communication channels are, however, contingent upon easing up the suffocating atmosphere of mistrust that has build-up in the region over the years following the partition. Evidently, Arabs from Egypt and Jordan refuse to travel to the occupied territories because they “won’t submit to the humiliation of being examined by Israeli policemen at the border or the barrier.”  Such termination of interaction between communities, Said argued, has been preventing Arabs from coming up with a plan which would actually help Palestine to “deal” with Israel.

This mutual ignorance is evident in the day-to-day relationships between Jews and Arabs living in Israel, the West Bank and Gaza that has fed into the practice of stereotyping each other. David Shipler as the New York Times bureau chief in Jerusalem witnessed some of the worst forms of these stereotyping.

In his immensely popular book Arab and Jew: Wounded Spirits in a Promised Land, Shipler talks about the severe distortion of history, especially on the Palestinian side. Evidently, the Palestinians have come to see Israelis only as “colonialists”. The current discourse on Palestine’s liberation not only demands Israel’s withdrawal from  the territories conquered in the Six-Day War but “gives no recognition of Jewish history in the Land of Israel, of the Holocaust, and the real reasons for the creation of Israel,” Shipler pointed out.

Shipler’s observation has been that with the expansion of the Jewish settlement in the West Bank, brutality and nastiness have been increasing on both sides; both sides are “radicalizing” each other. Both sides, Shipler comments with some amount of irony, knows how to push the right buttons to provoke the other side.”

In the past, Indian governments, while giving instantaneous recognition to Israel, also exercised the moral authority to critique Israel's blatant disregard for the human rights of Palestinian refugees

One of the worst victims in this relationship based on hatred are the children on both sides. In the Jewish Israeli and Palestinian high schools that Shipler visited in different points of time, each group saw themselves as the victims and the other as the perpetrator. Thus, the very basis of reconciliation that could have emerged from recognising that it had victimised the other is sadly missing. Both the communities are sadly losing the nuances of a political decision and, thus, moving away from the possibility of a democratic solution.

The deterioration of the situation is evident from the following report published by the UN Committee on the Exercise of the Inalienable Rights of the Palestinian People. It categorically states that extrajudicial killings and excessive use of force by the “Israeli occupying forces” have increased in the period between 7 October 2015 to 3 October 2016. This has raised serious concerns about the protection of civilians, including children.

In 2012, as violence broke out between Israel and Palestine, UNICEF had set up an emergency psychosocial response unit in Gaza. A rapid psychosocial assessment carried out by the UNICEF revealed severe psychosocial distress among selected children living in the 35 hardest-hit areas of Gaza during the hostilities. One such kid, named Oudai, showed complete “disassociation” with reality; he stared blankly, sat in a corner, completely unable to shake the trauma of Israeli bombing. Experts have expressed concerns that such psychosocial distress would get even more pervasive as hostility continues in the region

On top of this, Israel continues to expand its illegal settlements in the West Bank, including in East Jerusalem. Settlement construction was accompanied by official plans to build thousands of new settlement units, further fragmenting Palestinian land, and disconnecting communities. Much to the chagrin of the Palestinians, Israel attempts to retroactively “legalize” settlement outposts that have cropped up in newly encroached lands.

Though Israel’s representatives have often accused the UN of passing “biased resolutions” and putting forth empty symbols, the United Nations has consistently maintained the position that a just and permanent settlement of the question of Palestine could be reached only by ending the Israeli occupation that began in 1967, achieving the full independence of the State of Palestine on the basis of the pre-1967 borders with East Jerusalem as its capital. With the approach of the fiftieth anniversary of the Israeli occupation, the General Assembly, at its seventy-first session, is expected to declare 2017 as the “International Year to End the Israeli Occupation”, with activities and efforts to be organised to that end.

The past is never perfect and that is the reason we strive to built a better future. But at least in the past, Indian governments, while giving instantaneous recognition to Israel, also exercised the moral authority to critique Israel's blatant disregard for the human rights of Palestinian refugees. India somehow is ready to give up on that in its quest for a different global equation where strong men rules.