Thai PM faces no-confidence debate inside and outside parliament 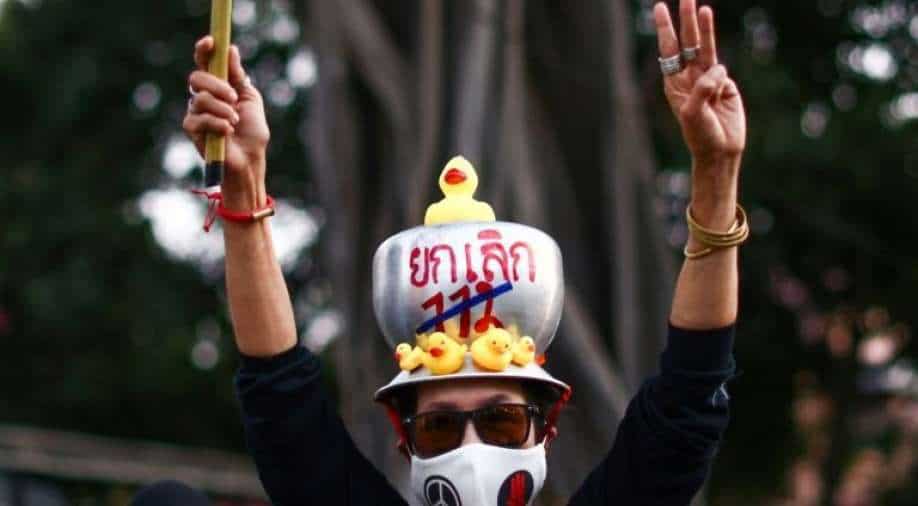 A protester in Thailand Photograph:( AFP )

Friday marked the final day of a four-day no-confidence debate against former coup leader Prayut and his cabinet, and MPs will vote Saturday on their fate.

Protestors outside Thailand's parliament held their own version of a no-confidence debate against Premier Prayut Chan-O-Cha Friday night, as inside, opposition MPs rained a torrent of criticism upon his administration.

Friday marked the final day of a four-day no-confidence debate against former coup leader Prayut and his cabinet, and MPs will vote Saturday on their fate.

Prayut -- whose coalition government holds a majority -- is expected to survive the vote, but the proceedings could set off internal struggles within his party.

Activists from Thailand's youth-led pro-democracy movement decided to set up their own debate right by the parliament's entrance, hoisting portraits of Prayut and his ministers up on a truck.

Rally organisers set up a projection screen which played out the events going on inside the building.

"The opposition MPs weren't able to speak about everything in the parliament," said an 18-year-old protester who would only give his name as Petch.

"That's why we need to double down the efforts to speak about how bad the government has been doing."

Hundreds of protesters young and old brought pots and pans to create a cacophony of dissent -- a tactic borrowed from neighbouring Myanmar where an anti-coup movement is agitating against a military junta.

Dozens of riot police stood watch nearby, with a water cannon truck at the ready.

A woman wore a cauldron as a hat, with the words "Abolish 112" scrawled on it -- in reference to Thailand's draconian lese majeste law which shields the monarchy from criticism.

So far, more than 50 activists have been charged under the law since the movement kicked off in mid-July, though only four prominent leaders have been detained.

"We need to come out so that the key activists being detained in jail did not do everything in vain," said 13-year-old Iam.

Besides demanding royal reforms -- once a taboo subject which has been pushed into public attention by the movement -- the protesters are also calling for the resignation of Prayut.

The former army general led a 2014 coup, and renewed his lease on power after elections in 2019 that were governed under a military-scripted constitution.

Critics say his administration -- staffed with former generals -- is unfit to run a country whose already faltering economy has been further weakened by pandemic-spurred border closures.

This week saw opposition MPs accuse Prayut and Health Minister Anutin Charnvirakul of being responsible for a new wave of coronavirus that emerged in Thailand in December.