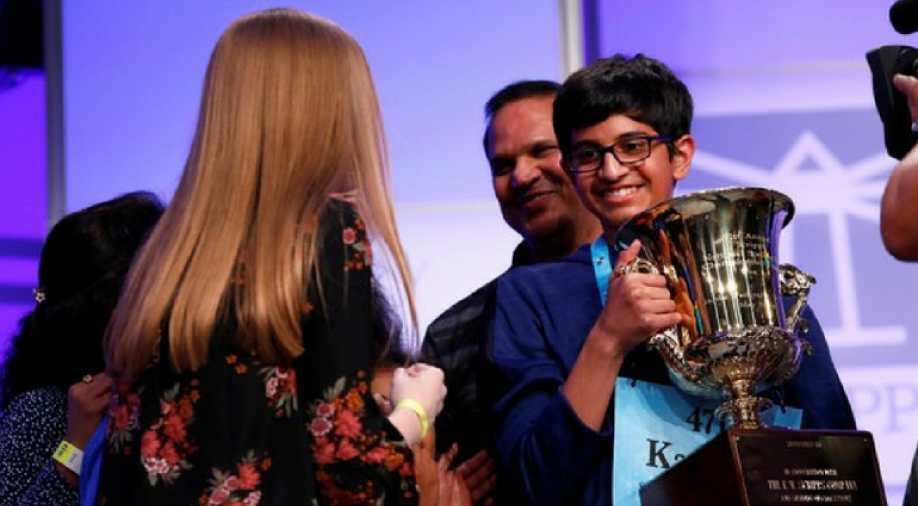 For the 11th consecutive year, Indian-origin children have monopolised the National Spelling Bee crown with Karthik Nemmani winning the 2018 championship, taking home a $40,000 cash prize, beating out five others in the last rounds.

Nemmani, 14, went head-to-head with fellow Texan Naysa Modi, 12, for only a few moments before winning the bee with the word "koinonia," which is a body of religious believers.

"I had confidence, but I didn't really think it would happen," Nemmani said moments after receiving his trophy at the Gaylord National Resort and Convention Center in suburban Washington. "I'm just really happy. This has just been a dream come true."

Modi quickly wiped away tears as she walked off the stage with her family. She lost the competition by misspelling the word bewusstseinslage, which is a state of consciousness or a feeling devoid of sensory components.

Nemmani's loss to Modi at the county level would normally have disqualified him for the national bee but he took advantage of a new program called RSVBee, which allows spellers to pay to compete in the national bee.

"In tough regions like Dallas and San Francisco, a lot of kids have a lot of potential, but they aren’t able to ... qualify," said Nemmani, who spent at least four hours a day studying for the bee.

His father, Krishna Nemmani, an immigrant from Hyderabad, India, said his son had worked hard "every day and night."

"He just really wanted to get it," he said.

The final leg of the bee started with 16 spellers and lasted more than two hours. Students aced obscure words like lophophytosis, pseudepigrapha and ooporphyrin, while others struck out on loratadine, perduellion and paillasson.

More than a dozen former champions were in the audience, including 1985 winner Balu Natarajan, whose son, Atman Balakrishnan, 12, made it to the third round of competition on Wednesday. It marked the first time the child of a previous champion competed in the national finals.

Karthik Nemmani attributed his success to his father and his spelling coach. He said he would spend the $40,000 on college, where he hopes to study something related to technology.