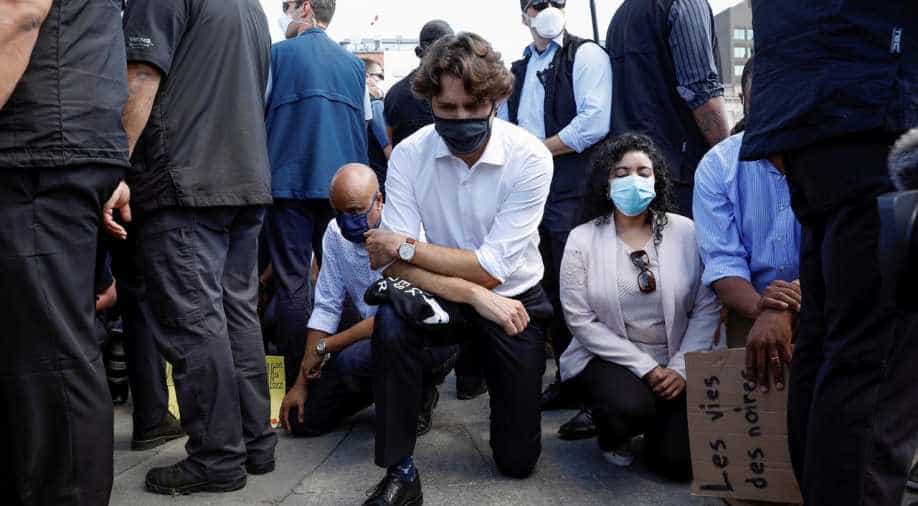 Similar demonstrations were held in other Canadian cities as well -- including Toronto -- where hundreds walked downtown in protests sparked by the death of George Floyd, an unarmed black man, while in police custody in Minnesota.

Protestors in Canada chanted "Stand up to Trump!" to Prime Minister Justin Trudeau as he joined thousands at an anti-racism rally on Friday and knelt alongside them thrice -- a gesture used to protest against police brutality and the treatment of African-Americans by police.

Similar demonstrations were held in other Canadian cities as well -- including Toronto -- where hundreds walked downtown in protests sparked by the death of George Floyd, an unarmed black man, while in police custody in Minnesota.

Trudeau, wearing a black mask and surrounded by bodyguards, made a surprise appearance at the "No justice = No peace" rally in front of the parliament. His appearance came a day after police shot and killed an indigenous woman during a wellness check in eastern Canada.

On Monday, police threw tear-gas at peaceful protestors outside the White House to make way for President Donald Trump to have his picture taken holding a Bible while standing in front of a church.

Trudeau recently made headlines as he paused for more than 20 seconds when asked about Trump's reaction to protests across the US -- before he said that Canadians were watching the United States with "horror and consternation."

Trudeau did not speak at the rally Friday and left as the protestors began a march to the US Embassy, near the Parliament building.

The Minneapolis Police Department has faced decades of allegations of brutality and other discrimination against African Americans and other minorities, even within the department itself. Critics say its culture resists change, despite the elevation of Medaria Arradondo as its first black police chief in 2017.