Spain: Thousands protest against Airbus after it announces layoff plans 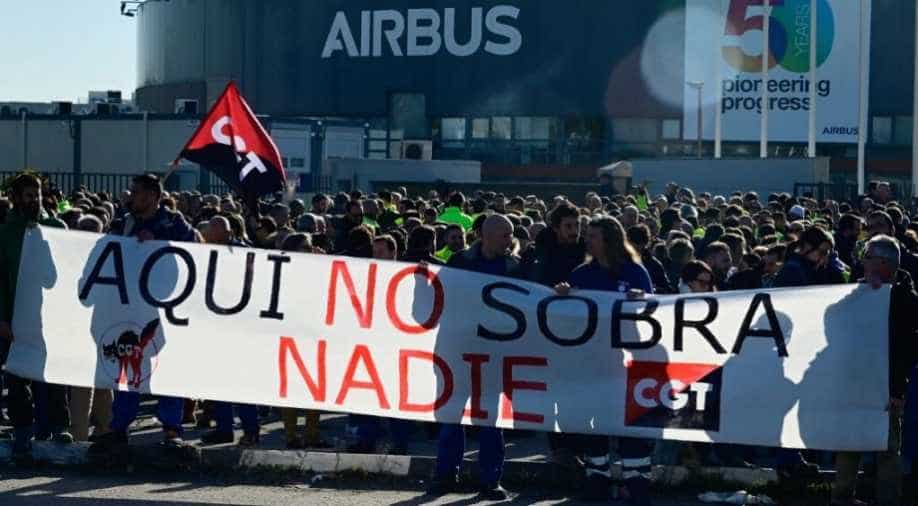 'People are a bit scared, to say the least,' said a protester.

THousand so people in Spain staged a protest against the European plane-maker Airbus after it decided to cut 630 jobs. The protests were staged outside eight production sites across the European country.

The workers briefly stopped work and staged a protest outside the company's facilities in Getafe. The also held a banner reading, "There is no surplus here".

"We're all worried because there are a lot of jobs and there's no room for job cuts here," news agency AFP quoted an employee as saying.

"People are a bit scared, to say the least."

According to a report, Airbus has announced to layoff thousands of employees across Europe. The report says the company aims to cut 2,362 posts across Europe, including 829 in Germany, 404 in France, 357 in the United Kingdom and 142 in other countries.

Airbus said the cuts would take effect in the next two years in its defence and space division, which accounts for 15 per cent of the group's overall revenue.

But Jorge Escribano, another union representative at Airbus, said that given the positive performance in the company's civil division, there should be room for manoeuvre.

Airbus employs 13,000 people across Spain, but union bosses said the final number of jobs to be affected was not immediately clear, expressing concerns that smaller and medium-sized subcontractors were likely to be worst hit.