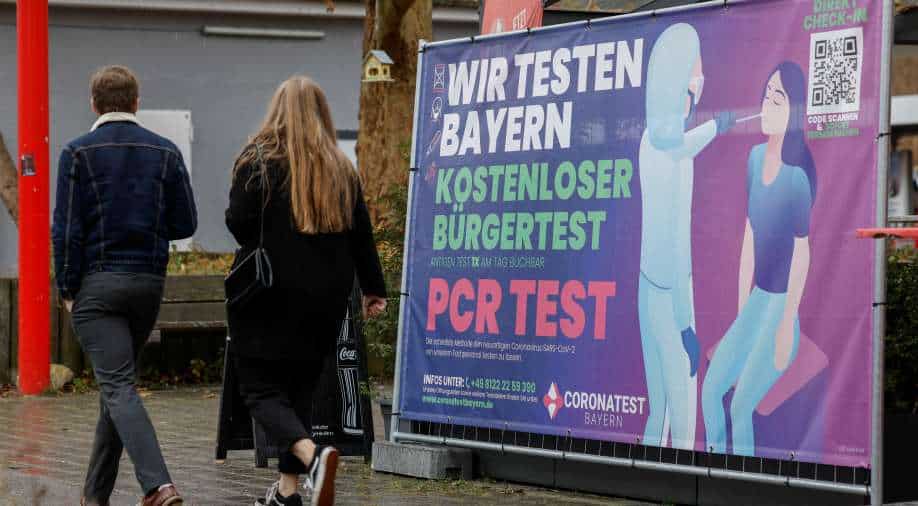 People walk past a COVID-19 test centre amid the pandemic in Furstenfeldbruck, Germany Photograph:( Reuters )

Spain reported the first case of the Omicron variant as the strain continued to spread in Europe.

The case was reported after a 51-year-old man arrived from South Africa on Sunday, authorities said. The man reportedly showed mild symptoms and was put under quarantine.

The variant was earlier reported in Belgium, UK, Germany and among several passengers aboard a Dutch flight from South Africa which landed at Amsterdam airport on Friday.

UK which had blocked flights from South Africa on Friday imposed new travel restrictions and directed people to wear masks in shops and on public transport from Tuesday.

As the new variant made inroads into Europe, Britain called a G7 meeting to tackle the variant. European nations moved quickly to impose travel bans on South Africa including southern African countries as panic set in worldwide.

Israel moved to bar all travellers as Angola, Mauritius, Seychelles, Gabon and Rwanda joined other countries to impose travel bans on South Africa.

However, South Africa's foreign ministry slammed the move asserting that it was "quite regrettable, very unfortunate" after African nations imposed travel bans.

South Africa's foreign ministry spokesman Clayson Monyela said: "When a fellow African country does that, especially in the context where most of these countries are beneficiaries... it doesn't make sense."