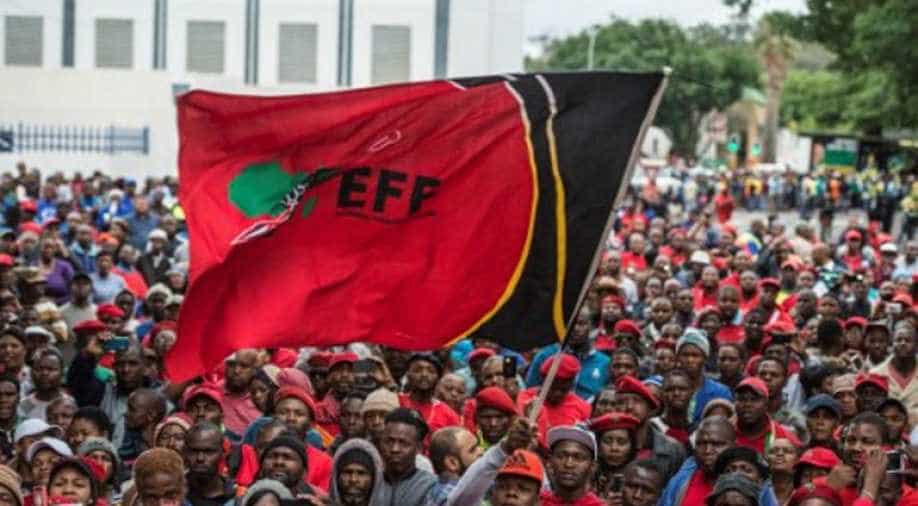 The Economic Freedom Fighters (EFF) opposition party and the ruling African National Congress held separate rallies outside the court to protest at the alleged assault and racism in South Africa. Photograph:( AFP )

Two white South African farmers briefly appeared in court on Wednesday on assault charges after an online video emerged showing them pushing a black man into a coffin and threatening to burn him alive.

Willem Oosthuizen and Theo Martins Jackson, both 28, were remanded in custody after their lawyer decided not to apply for bail.

Magistrate Jongilizwe Dumehleli said the pair should return for another court hearing on January 25.

The men face charges of kidnapping and assaulting 27-year-old Victor Mlotshwa over an incident that occurred in August at a farm near the town of Middelburg in the eastern province of Mpumalanga.

They were arrested on Monday after the video, apparently shot on a mobile phone by one of the two white men involved, went viral last week.

The 20-second clip shows one of the assailants shoving a black man, clearly in distress, into the wooden coffin and trying to force down the lid.

"Come, come. We want to throw the petrol on," said one of the men, speaking Afrikaans, according to the News24 website.

They are also accused of threatening to put a snake in the coffin.

Mlotshwa told ENCA television he was walking to the town of Middelburg and decided to use a short cut when the two men spotted him.

"I was in a hurry I had to use some path, a footpath, that was the shortest to go to Middelburg," he said.

"They accused me of trespassing. Then they beat me up and I had to run away," he said, adding he tried to flee but they caught him.

"They tied me with cable tie and took me to the nearest farm. They beat me up and forced me into the coffin."

The Economic Freedom Fighters (EFF) opposition party and the ruling African National Congress held separate rallies outside the court to protest at the alleged assault and racism in South Africa.

Racial controversies have erupted regularly on social media in recent years in South Africa, which is still beset by deep-rooted inequality 22 years after the end of white-minority apartheid rule.