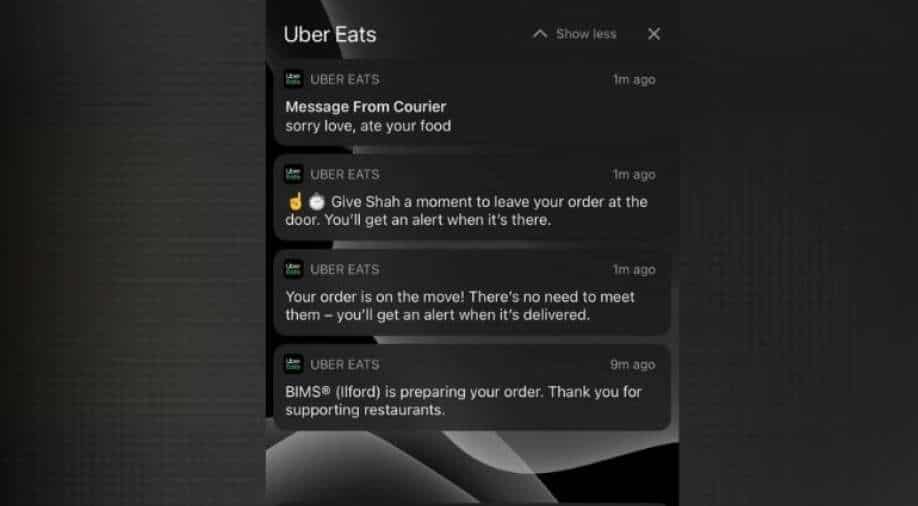 She was continually receiving notifications about the status of her delivery, but the last message from the delivery agent left Ilyas absolutely stunned

Since the phenomena of online food delivery have risen, we have often seen cases of people reporting that their food packet tampered or the delivery person tried to eat their order.

However, a delivery agent went an extra mile to not just eat the order of London-based law student, but also mockingly messaging her about his act.

Illy Ilyas, 21, ordered two burgers, chips and a chicken wrap on Uber Eats on Saturday costing about USD 20 in London.

She was continually receiving notifications about the status of her delivery, but the last message from the delivery agent left Ilyas absolutely stunned.

Ilyas said hearing the response her her "open-mouthed"

"This has never happened to me before," Ilyas was quoted as saying by The Sun.

To add insult to her injury, the Uber Eats app said that her order has been delivered and even suggested her to give tip to the agent.

However, Ilyas later complained and got her order for free by the app.

The incident, though, has not arisen any cold or bitter feeling for the law student and she said that the delivery agent likely did this as he was hungry.

"Maybe he was really hungry. I wouldn't want to be the reason a peckish man gets unemployed in a pandemic. I found the whole thing funny. At least I know that the food was eaten," she added.