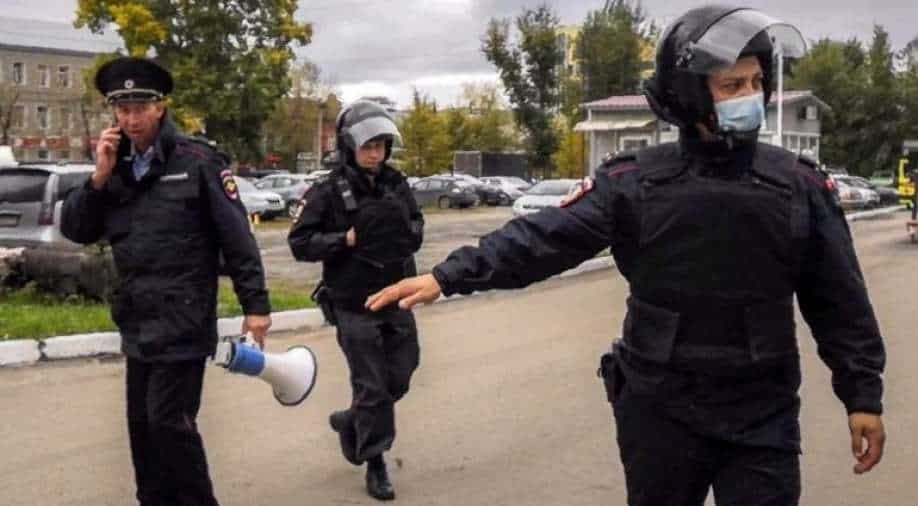 Police officers guard as students evacuate a building of the Perm university campus in Perm on September 20, 2021 following a shooting. Photograph:( AFP )

A gunman opened fire Monday on a university campus in central Russia and killed six people before being detained, investigators said, in the country's second mass shooting this year to target students.

Six persons were killed in the shooting at Russia's Perm State University, according to revised information, while 24 others are undergoing medical treatment as a result of the incident, the ministry of health stated on Monday.

"Six persons were died in the event at Perm State University, according to updated information from the federal centre for emergency medicine," the Russian Ministry of Health stated in a statement. "The 24 injured people are receiving medical care."

Students in Perm, some 1,300 kilometres (800 miles) east of Moscow, were seen throwing items from university building windows before jumping to flee the shooter in a video posted on social media.

The Investigative Committee, which investigates significant crimes in Russia, initially stated that eight individuals had been slain, but this was later changed to six.

According to the report, 28 patients were treated at Perm State National Research University after the attack.

"Some of them have been hospitalised with injuries of varying severity," it said in a statement.

It said the gunman, later identified as a student at the university, carried out the shooting with a hunting rifle he purchased earlier this year.

"During his arrest, he put up resistance and was wounded, after which he was taken to a medical facility," the statement said.

According to Russian news media, 19 of the wounded are being treated for gunshot wounds, according to the health ministry.

Amateur film allegedly recorded during the incident was presented by state television, showing a person clad in black tactical clothes, including a helmet, carrying a weapon, and strolling around the campus.

Due to strict security at educational establishments and the difficulty in obtaining firearms, school shootings have been relatively rare in Russia.

However, Monday's attack was the second this year, following a 19-year-old who opened fire in his old school in Kazan's capital city, murdering nine people in May.

Although the gunman had a neurological problem, investigators determined that he was qualified to obtain a licence for the semi-automatic shotgun he used in the attack.

Putin called for a review of gun restriction regulations on the day of the incident, which was one of the worst in recent Russian history.

The minimum age to purchase a hunting rifle was raised from 18 to 21 years old, and medical checks were tightened.