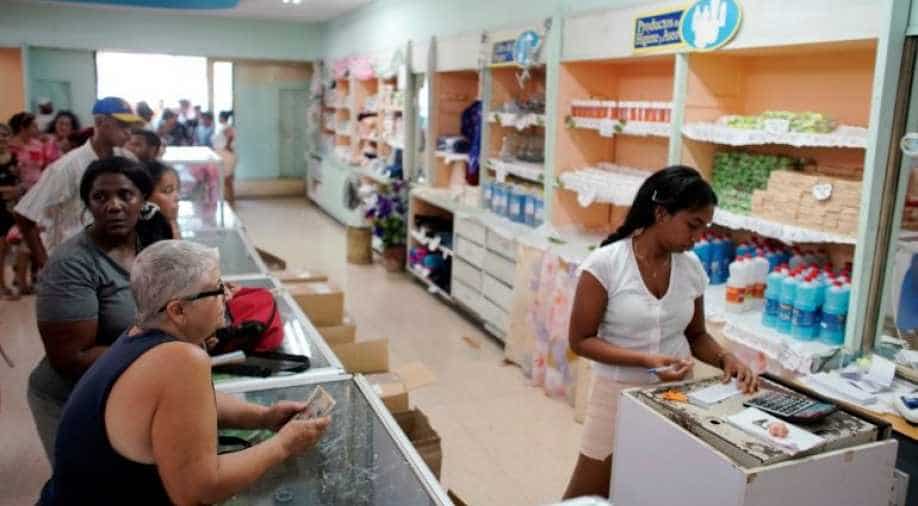 After Cuba started limiting sales this month, partly blaming tightened US economic sanctions on the Communist-run island, the couple wanted to buy as much as possible and lined up for three hours under the Caribbean sun to get tickets guaranteeing them their rations.

Israel Hidalgo and his wife left home around 7:30 a.m. to reach a supermarket across Havana because they heard it might be selling chicken, a staple of the Cuban diet increasingly scarce on the shortage-plagued island.

After Cuba started limiting sales this month, partly blaming tightened US economic sanctions on the Communist-run island, the couple wanted to buy as much as possible and lined up for three hours under the Caribbean sun to get tickets guaranteeing them their rations.

Inside, they lined up again to collect two bags of chicken thighs each, as fellow shoppers elbowed one another in pursuit of their own rations, and headed for the checkout feeling like they had won the lottery.

"We were born in this revolution and are used to rough times," said Hidalgo, a 61-year old blacksmith. "We are bracing ourselves for it to get worse."

Long lines outside shops with mostly bare shelves are increasingly common in Cuba, and the government has indeed signalled that things are going from bad to worse.

Cuban President Miguel Diaz-Canel, in a speech last month, accused the Trump administration of engaging in an “asphyxiating financial persecution that makes the import of goods and resources of primary necessity particularly difficult.”

The degree to which new US sanctions, due in part to Cuba's support for Venezuelan President Nicolas Maduro, have compounded its economic woes is open to debate.

The economy had already stagnated in recent years in tandem with the implosion of strategically Venezuela, resulting in cuts in fuel and energy use by state entities and this year shortages of basic goods such as bread, chicken and eggs.

But the increase in sanctions, which have hit the key tourism sector and added to investor and bank jitters about dealing with Cuba, has some economists predicting the economy will slip from stagnation into a full-blown recession later this year.

The economy has averaged 1% annual growth over the last three years, compared with the 5% to 7% rate economists say is needed to recover fully from the depression caused by the fall of its former benefactor, the Soviet Union, in 1991.

"While the crisis will not be as bad as in the 1990s, it will have a worrying social impact on the most vulnerable households, which are already on subsistence salaries," said Pavel Vidal, a former Cuban central bank economist who teaches at Colombia's Universidad Javeriana Cali.

Bracing for harder economic times, the government has resorted to what it knows best to manage the crisis and prevent social unrest: more control.

Interior Commerce Minister Betsy Diaz said two weeks ago the government would "temporarily" ration sales of a handful of basic products like eggs on a monthly basis, using ration books distributed after the 1959 Revolution, and limit the sale of others like chicken to ensure everyone gets their fair share.

Some Cuban economists say the developing crisis stems fundamentally from an inefficient centrally-planned economy that imports more than two-thirds of its food needs. Calling rationing little more than a short-term solution, they say the government must open up to a series of market-oriented economic reforms before the crisis deepens.

"This could be a critical moment that generates the consensus necessary to apply changes," said Vidal. "The government needs to give more space to the private sector and investment."

Cuba has enacted some economic reforms in recent years, including expanding the private sector from 2010 onward and introducing a new foreign investment law that cut taxes by around 50% in 2014.

But local economists like Omar Everleny say the reforms undertaken have been too cautious so far. The government has backtracked on overhauls of areas like agriculture and the dominant public sector remains deeply inefficient.

Cuba was already behind on an estimated $1.5 billion in short-term commercial debt and warning of austerity before US President Donald Trump started the latest round of tightening of the decades-old US trade embargo.

Aid from Venezuela, in the form of subsidized oil, had long masked the true extent of Cuba's economic problems, but it started to fall from 2015 when a drop in oil prices roiled that OPEC nation's economy.

Venezuela's crude shipments to Cuba are now about half what they were four years ago, and they could soon fall further. Last month, the United States also began targeting vessels and companies that ship oil to the island from Venezuela for sanctions, threatening the energy grid and transportation.

The US sanctions against its old Cold War foe are also hitting the two bright spots in the otherwise glum economy: tourism and foreign investment. Both had boomed briefly after the announcement of a Cuba-US detente in 2014.

Tourism revenues dropped by 4.6% in 2018, according to official data released last month. The announcement in 2017 of tighter travel restrictions on US citizens played a role.

"At one point US visits dropped more than 40 per cent," Cuban Tourism Minister Manuel Marrero told Reuters, adding he still hoped tourism would grow this year.

Meanwhile, the Trump administration has activated a long-dormant law under which Cuban-Americans can sue foreign companies that profit from their properties nationalized during the first years of the 1959 Revolution.

Western diplomats and businessmen have called the threat of potentially costly US court battle another clear disincentive for banks and outside investors to do business with Cuba.

The United States has also threatened to further tighten restrictions on travel and to impose a cap on cash remittances to Cuba, measures that could hit the economy hard.

Cuba's government has said it will continue moving down the path toward reform. But it has failed to respond so far to calls from the island's entrepreneurs for basic changes such as the creation of wholesale markets for the private sector, and the right to import and export.

Instead of opening the economy further, some Western diplomats and analysts say there is risk Cuba's leadership will adopt a siege mentality in the face of increased US hostility. That could mean turning to allies like Russia, Vietnam and China for help to muddle through while keeping its stranglehold on economic life.

"The US sanctions could be counterproductive," said one diplomat who asked not to be identified. "Cuba has historically closed up at times like these."

Cubans are not going hungry as they did during the so-called "Special Period" after the collapse of the Soviet Union. But they are increasingly connected to the rest of the world via the internet and foreign travel, and many have grown weary of government attempts to blame the US embargo for the bulk of their country's woes.

"We are in total freefall," said Hidalgo's wife, Carmen Lozano, 55, clinging to her two bags of rationed chicken. "They should have allowed free production and sales from the beginning of the revolution."

Inequality has risen in recent years in Cuba and many believe the economic crisis could have a more disproportionate impact now than it might have in the past.

In a country where the government's claim to legitimacy rests to a large extent on ensuring a certain level of equality, the authorities seem well aware that most people lack the cash to stock up on whatever basics they need on the black market.

"The government’s new rationing program is trying to address that simmering discontent by making the small quantities of goods that are in stock more widely available," said William LeoGrande, a professor of government at American University.

"The government understands that discontent over the economy is their biggest political vulnerability so they will do everything they can to maintain supplies of basic goods."