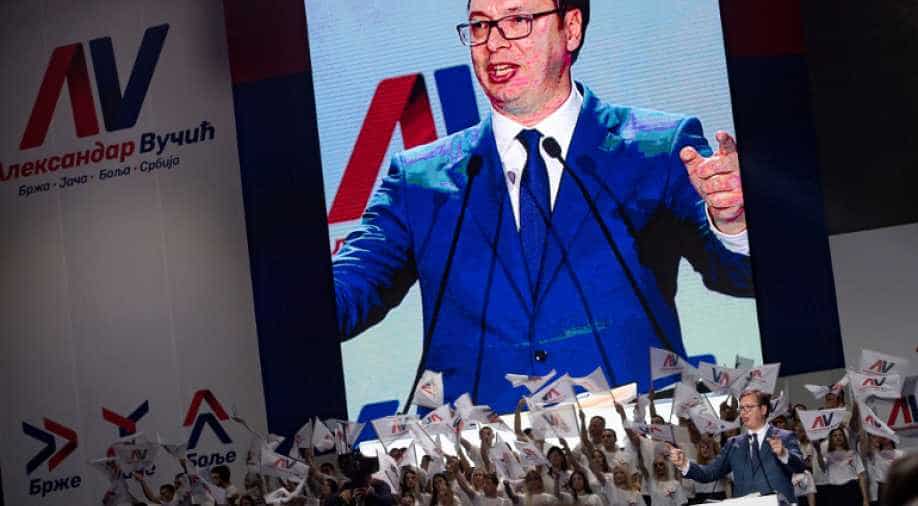 Centre-right Prime Minister and candidate for the presidential election, Aleksandar Vucic, gestures during a pre-election rally of his Serbian Progressive Party in Belgrade. Photograph:(AFP)
Follow Us

Serbians went to the polls Sunday to elect a new president, with strongman Aleksandar Vucic hoping to tighten his grip on power amid opposition accusations he is shifting the country to authoritarian rule.

Vucic, the 47-year-old prime minister, is hoping to clinch more than 50 per cent of the ballot, winning a five-year mandate as president outright.

Most surveys tip Vucic for an easy victory in the face of a divided opposition. But if he fails to win a majority in the first round, a second round run-off will be held on April 16.

The post of president has largely been ceremonial in recent times but analysts believe it would be a much more influential position if occupied by Vucic.

Vucic has touted economic success since becoming prime minister in 2014, achieving growth of 2.8 per cent last year and cleaning up public finances.

But the average Serbian earns a mere 330 euros ($355) per month while unemployment is running above 15 per cent.

The opposition has been unable to field an united candidate to run against him, so Vucic faces a wide range of challengers.

And shaking up the race is Luka Maksimovic.

He campaigns in a Borat-style white suit, sports a samurai-style ponytail and hipster beard, touts a manifesto studded with lunatic pledges and uses a made-up name that mocks politics as the circus of greed.

Using the fictional name of Ljubisa Preletacevic -- nicknamed "Beli" (White) -- he could even come second in the race behind Vucic, some analysts say.

Opposition candidates have presented the vote as a referendum on Vucic, whom they accuse of trying to consolidate power for himself.

Ultranationalist Seselj argues that "all the power should not be concentrated in the hands of a single man, Aleksandar Vucic."

Some voters echoed this position.

"I cannot deny that Vucic works a lot, that he is a friend with both the West and Russia. But I do not want all the power to be in the hands of one politician any more," said 59-year old taxi driver Mihajlo.

But Katarina Markovic, a 73-year old retired lawyer, said it was important to support Vucic, whose reforms "provided results."

The progress made by the Vucic government "is already not bad. It should continue faster in the same direction," she told AFP.

Both the opposition and independent media monitoring groups have cried foul over the omnipresence of Vucic in the media.

In the week leading up to the vote, national TV channels devoted 51 per cent of their airtime to Vucic, more than all the other candidates put together, according to analysis by the Kliping research agency published in the Danas daily.

That rose to 67 per cent when his appearances as prime minister were taken into account, added the analysis.

On Thursday, the last day of the campaign, all but two of the dozen or so national dailies appeared wrapped in full-page ads reading: "On April 2, give a decisive vote to Aleksandar Vucic."

Political analyst Boban Stojanovic said he "wonders if after such a campaign, the elections could be free and fair."

"I am not really sure. Such media domination is enough to make us wonder if the elections are fair," Stojanovic told AFP.

Ex-ombudsman Jankovic, seen as a key Vucic rival, has also claimed public sector workers have been intimidated ahead of the vote, citing testimony to that effect.

The opposition hopes to force Vucic into a second round, which could be "dangerous" for the prime minister, according to political analyst Dusan Janjic.

Vucic has run a typically aggressive campaign, with a video showing a plane marked "Serbia 2017" about to crash for a lack of leadership.

He has accused opponents of receiving "millions of euros (from) certain foreign countries", without offering specifying charges.

"The 10 that united against one... (want) to stop our country and return it to the past so they can line their pockets," Vucic told a rally.

The opposition fears electoral fraud, in particularly in Albanian-dominated Kosovo where some 120,000 Serbs live.

Some 6.7 million eligible voters can cast their ballot till 8:00 pm (1800 GMT). The first results are expected before midnight.