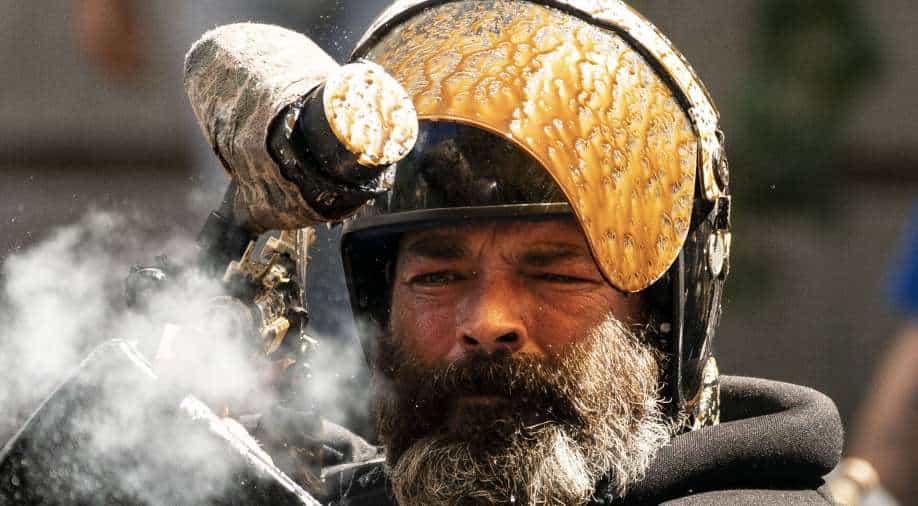 The Texas man, Alan Swinney, 51, was a “white nationalist vigilante cowboy,” who went to Portland to engage in political violence during protests there in the summer of 2020, prosecutors said

A self-professed member of the Proud Boys from Texas who traveled to Portland, Oregon, to confront protesters there last year was sentenced Friday to 10 years in prison for shooting a man in the eye with a paintball gun, spraying people in the face with bear mace and aiming a loaded handgun at a crowd, prosecutors said.

The Texas man, Alan Swinney, 51, was a “white nationalist vigilante cowboy,” who went to Portland to engage in political violence during protests there in the summer of 2020, prosecutors said.

In social media posts, he made threats against “the left” and “antifa,” prosecutors said, and he tried to recruit people to form a militia to fight in what he believed was a civil war.

Swinney, who appeared at several demonstrations in the Northwest, became a “known entity” in Portland, as he instigated and committed violent acts under the banner of free speech and pro-police sentiments, prosecutors said.

On two days — Aug. 15, 2020, and Aug. 22, 2020 — he led a small group of like-minded people and engaged in multiple acts of violence during demonstrations stemming from the murder of George Floyd, prosecutors said.

Swinney caused a serious eye injury by shooting a man in the face with a paintball gun, and he discharged bear mace on multiple occasions — spraying some people directly in the face — and aimed a loaded Ruger .357 Magnum handgun at a crowd, prosecutors said. He also shot people with paintballs, prosecutors said.

In October, after a six-day trial, a Multnomah County jury found Swinney guilty of 11 criminal charges, including second-degree assault, fourth-degree assault and unlawful use of a weapon with a firearm, prosecutors said.

During the trial, Westover argued that Swinney had been defending himself against “agitators” who were harassing him and that he saw himself as a “protector” who came to Portland to stand between demonstrators clad in black causing mayhem and “Back the Blue” protesters, The Oregonian reported.

In a sentencing memorandum, prosecutors argued that letters, social media statements and testimony from Swinney showed that he had “no remorse for his actions, no desire to change and every intention of engaging in future acts of violence.”

“During the trial, he quickly labeled all of the people that opposed him as terrorists, he expressed joy for those that were hurt, bragged about his actions, and strongly asserted that he would do it all over again if given the chance,” prosecutors wrote.

Prosecutors included in the memorandum a letter that Swinney had written to Derek Chauvin, the former Minneapolis police officer who was sentenced in June to 22 1/2 years in prison for murdering Floyd by kneeling on his neck for more than nine minutes as he pleaded for air.

“Our country has too many George Floyds in it,” Swinney wrote. “It’s time to clean house.”

Prosecutors said that Swinney had called himself a “patriot” and that he was a self-professed member of the Proud Boys, the far-right group notorious for engaging in brawls.

The group has come under scrutiny as federal agents try to determine to what extent its leaders planned the assault on the Capitol on Jan. 6, when a mob of Trump supporters temporarily disrupted the certification of the presidential election results.

In August, the group’s leader, Enrique Tarrio, was sentenced to five months in jail for possessing high-capacity rifle magazines a few days before the siege and for burning a stolen Black Lives Matter banner in Washington, D.C., after a Trump rally descended into violence in December 2020.