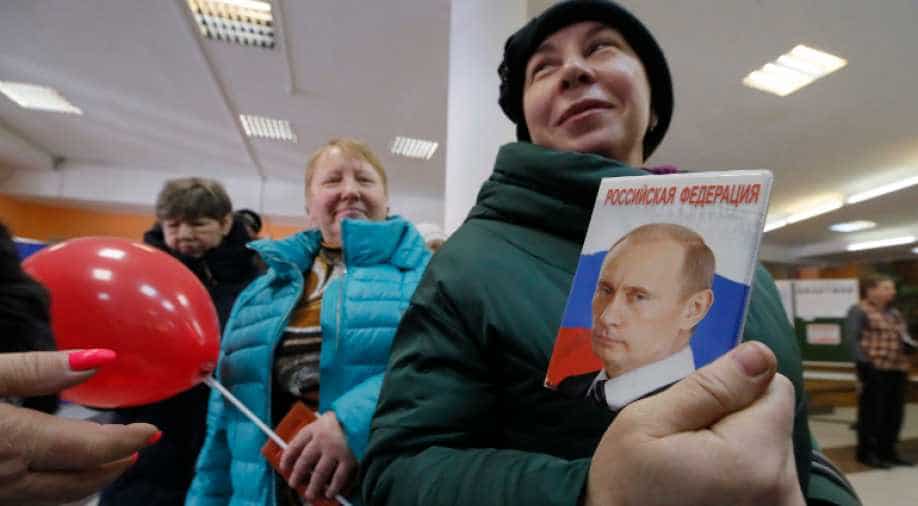 A woman shows a passport cover with an image of Russian President Putin at a polling station during the presidential election in Moscow Photograph:( Reuters )

From frustration with corruption and poverty to Moscow's showdown with the West, Russians shared their concerns as they voted in Sunday`s presidential election that is set to extend President Vladimir Putin`s Kremlin term to 2024.

"I am for Putin. There is no alternative to him," said Valentina Popova, a 77-year-old Moscow retiree.

"I respect him for his foreign policies, otherwise Russia would perish. There`s a lot that needs to be done inside the country."

Natalya Kononova, 41, senior cashier, 41, Moscow: "I am for Putin. We trust him. And voting is my civic duty."

Iraida Korablina, 67, Moscow: "I am for Putin. The foreign policies are correct although inside the country a camarilla is calling the shots."

Sergei Yakovlev, 47, Saint Petersburg: "I am not expecting anything good. I voted for Grudinin, but it`s clear that it`ll be Putin. He has no programme of action, things keep getting worse. He will keep sitting on oil reserves without changing anything until everything ultimately disintegrates in every area."

Antonina Kurchatova, 40, Saint Petersburg: "I voted Putin. But with a different feeling unlike before. Right now I hoping that things just don`t get worse. I very much like his foreign policies, he`s doing everything right, but as far as the economy is concerned, everything is terrible. I am eagerly awaiting constructive economic measures and a change of government."

Lilia Kartashova, 70, Saint Petersburg: "Only Putin. I am expecting only good things. Remember what kind of country he took over from Eltsin - ruin, no one respected us and now? He is doing everything right. Only the government needs to be kicked out - especially Medvedev. What kind of prime minister is he? He is a laughingstock."