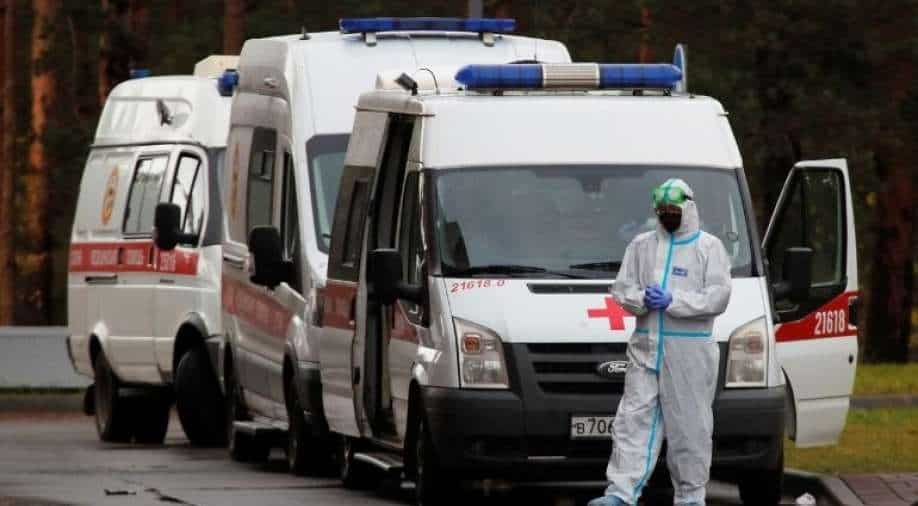 A medical specialist wearing protective gear stands next to ambulances parked outside a hospital amid the outbreak of the coronavirus disease (COVID-19) in Saint Petersburg, Russia October 23, 2020 Photograph:( Reuters )

Russia's daily tally of new COVID-19 cases soared to a record high of 17,347 on Monday as the Kremlin warned the pandemic was beginning to inflict a greater toll outside the capital Moscow

Russia's daily tally of new COVID-19 cases soared to a record high of 17,347 on Monday as the Kremlin warned the pandemic was beginning to inflict a greater toll outside the capital Moscow.

Authorities say Russia has enough hospital beds and medication to tackle the second wave of the coronavirus outbreak. But Kremlin spokesman Dmitry Peskov said "extremely energetic" efforts from both the federal and regional governments were now needed to cope with rising case numbers.

"The situation is quite serious," Peskov told reporters on a conference call. "The epidemic has stricken the regions, it has gone east of Moscow."

Russian media reports suggest some regions are struggling to withstand the pressure on their health system.

In one indication of the crisis, Russia's health watchdog said it was investigating after local media outlet 161.ru in the southern city of Rostov-on-Don reported that several COVID-19 patients had died in hospital when their oxygen supply ran out. A city official denied the report.

Authorities in the capital have opened temporary hospitals, ordered businesses to have at least 30% of staff working remotely and directed the city's sprawling metro system to turn away commuters with high body temperatures.

Russia in August became the first country to grant regulatory approval for a vaccine against COVID-19, doing so after less than two months of human testing, and large-scale trials are underway. Regulators approved a second vaccine earlier this month.

The virus has also cut a swathe through the ranks of lawmakers in the State Duma (lower house of parliament).

In a televised meeting on Monday, parliament speaker Vyacheslav Volodin told President Vladimir Putin that one in every five lawmakers in the 450-seat legislature currently has or had COVID-19. He said that 38 lawmakers were currently hospitalised, one of whom was in intensive care.

With 1,531,224 infections, the vast country of around 145 million people has recorded the world's fourth largest COVID-19 caseload - after the United States, India and Brazil.