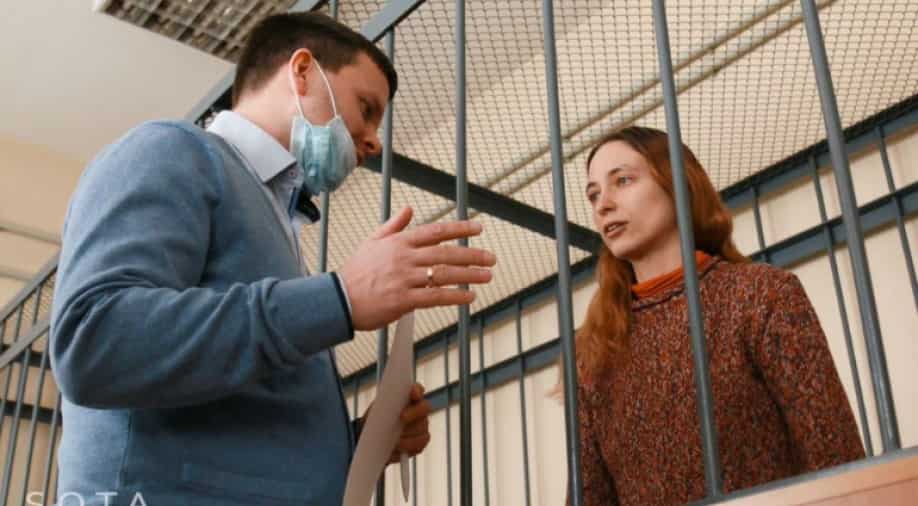 In this picture, Russian artist Alexandra Skochilenko can be seen inside the cage for defendants in the courtroom in Saint Petersburg Photograph:( Twitter )

A Russian artist called Alexandra Skochilenko has been accused of spreading ''fake news'' after she replaced grocery price tags with anti-war slogans.

Amnesty International says she faces up to 10 years in prison for protesting against Russia's invasion of Ukraine.

She had provided information regarding the Mariupol art school bombing in Perekryostok supermarket on March 31 which is being deemed as "political hatred for Russia."

Skochilenko also condemned ''Russian forces' special operation'' saying "I don't support the war in Ukraine. I came out on the street today to say so loudly." She wrote this in a post on her Instagram account.

According to investigators she has been accused of "putting fragments of paper in place of price tags, containing knowingly false information about the use of the Russian armed forces."

A massive fine of 10,000 rubles ($121) has been imposed on the independent artist and musician for participating in an anti-war protest that condemned Russian President Vladimir Putin.

Skochilenko belongs to a small town in the northwestern city of Saint Petersburg. A local court has called her a ''flight risk'' as she does not have an officially registered address.

She allegedly made the hand gesture of a peace sign and smiled inside the cage for defendants in the courtroom.

Skochilenko has frequently shared images saying "violence is never the way out" on her social media accounts.

She designed a series of postcards and painted images of peace symbols along with the Ukrainian flag.

Several Russian activists have raised concerns regarding her health online as she suffers from celiac disease. It is an immune reaction to the consumption of wheat, rye, and barley.

We need your help ❤️ This is our friend Sasha Skochilenko. She is facing 10 years in prison. Her crime? Replacing supermarket price labels with anti-war appeals and information on Russian attacks on civilians in Ukraine. pic.twitter.com/0DfGVgLM8f

Our friend and ex-colleague Sasha Skochilenko is facing from 5 to 10 years in prison because of the new law prohibiting "fake news about Russian military". Now she is under arrest until the end of spring which is life-threatening given her medical condition (celiac disease). 1/4 pic.twitter.com/JS2g81pJ9n

In a similar incident, a 59-year-old doctor called Andrei Makedonov and Tatiana Popova were detained in Russia.

While Makedonov had participated in a protest, Popova had hung "no to war" slogans on toys in a supermarket.