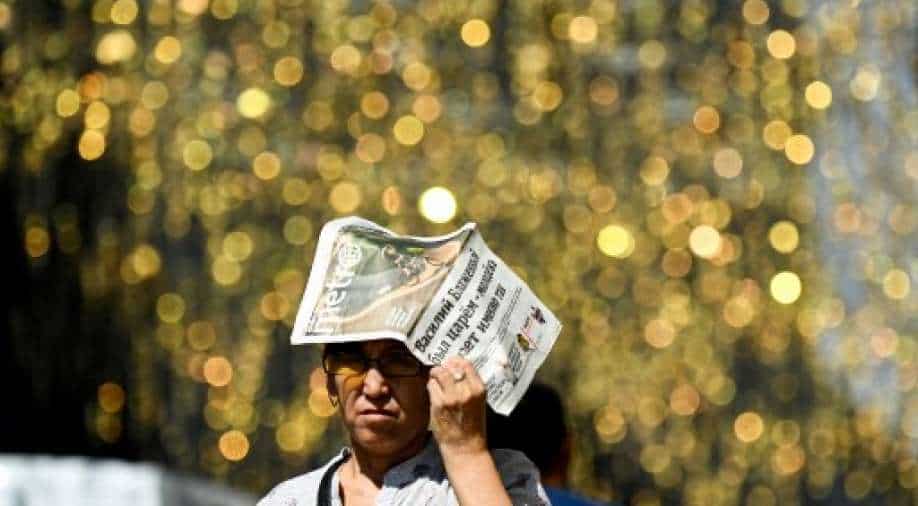 A woman protects herself from the Sun during a hot summer day in downtown Moscow Photograph:( AFP )

Russia has been hit by a heatwave with several regions experiencing record temperatures.

Russia's meteorological service said Tuesday the country could see its hottest summer on record, driven by climate change, after a record-breaking heatwave in June.

Moscow was hit by a historic heatwave at the end of June, with temperatures reaching a 120-year record.

"We estimate that temperatures will be high in the country both in the second half of July and August," meteorologist Roman Vilfand of the Rosgidromet agency said at a press conference.

He added that it was "of course possible" that it will be the hottest summer ever recorded in Russia.

Vilfand said the average temperature in the European part of Russia was the highest since records began 130 years ago.

Russia as a whole saw its hottest June since 2012.

Vilfand said that not all of the country was affected by the heatwave, saying there were "swathes of cold in western Siberia."

He also explained that climate change is leading to a shift in atmospheric circulation, due to significant temperature contrasts between the country's Arctic and southern regions.

"There are more and more anticyclones in northern regions which increases the risk of fires," he said.

According to many scientists, Russia -- especially its Siberian and Arctic regions -- is among the countries most exposed to climate change.

Russia has set numerous records in recent years and in June 2020 registered 38 degrees Celsius (100.4 degrees Fahrenheit) in the town of Verkhoyansk -- the highest temperature recorded above the Arctic circle since measurements began.

The rising mercury levels have contributed to devastating floods and forest fires that have affected Siberia with increasing regularity.

They are also contributing to the melting of permafrost, which covers about two-thirds of Russia's vast territory.