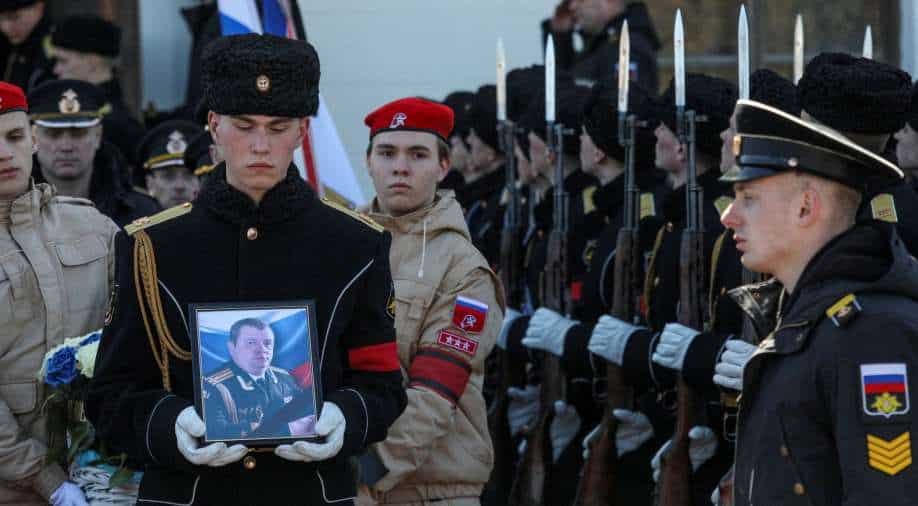 Sailors attend a memorial service for captain Andrei Paliy who was killed in Mariupol Photograph:( Reuters )

Amid heavy fighting in Ukraine, the Russian Army said it had lost 1,351 soldiers in the war even as NATO officials claimed around 7,000 to 15,000 Russian soldiers have died in over a month.

President Putin had ordered a "special military operation" in Ukraine on February 24 as Russian troops entered the neighbouring country amid heavy resistance by Ukraine's forces. Ukraine had claimed that over 15,000 Russian soldiers had died.

In recent weeks Ukraine's army has reportedly halted Russia's advance as the UK defence ministry said Ukraine's counterattacks are underway near capital Kyiv. The authorities in Moscow said at least 3,850 Russian soldiers were injured in the fighting.

Pentagon officials said Ukrainian forces were also counterattacking in Kherson which was reportedly under Russian control.

As the fighting continues on several fronts, the head of the Russian General Staff's main operational directorate, Sergei Rudskoi, said that the "core efforts" of the Russian Army was the "liberation of Donbass".

President Zelensky who has been pleading for a no-fly zone since the beginning of the war said his troops had dealt Russia "powerful blows".

"Our defenders are leading the Russian leadership to a simple and logical idea: we must talk, talk meaningfully, urgently and fairly," Ukraine's president asserted.

The refugee crisis in Ukraine continues to worry Western countries with French President Emmanuel Macron seeking assistance from Turkey and Greece to conduct a "humanitarian operation".