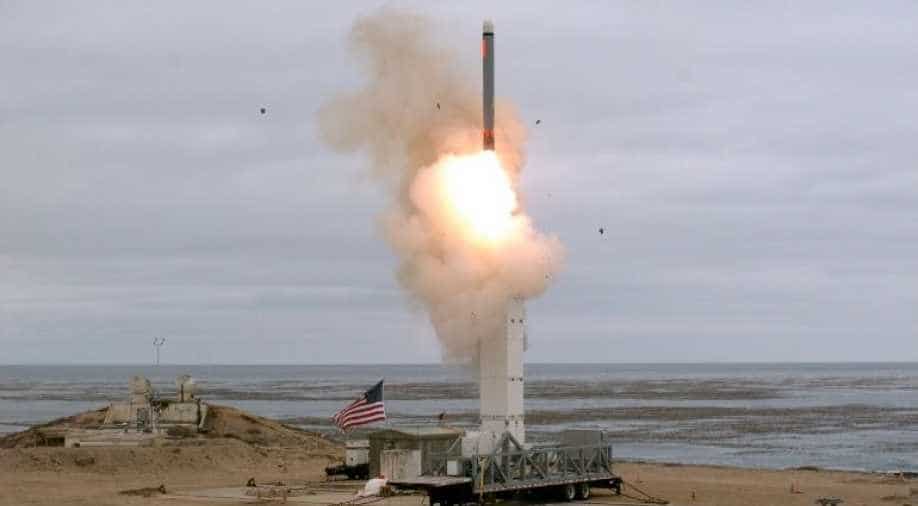 A conventionally configured ground-launched cruise missile is launched by the US Department of Defense (DOD) during a test to inform the development of future intermediate-range capabilities at San Nicolas Island, California, US, August 18, 2019. Photograph:( Reuters )

The Pentagon said on Monday it had tested a conventionally configured cruise missile that hit its target after more than 500 km (310 miles) of flight, the first such test since the United States pulled out Cold War-era Intermediate-Range Nuclear Forces Treaty (INF).

Russia and China have asked the United Nations Security Council to meet on Thursday over "statements by US officials on their plans to develop and deploy medium-range missiles," according to the request seen by Reuters.

Moscow and Beijing want to convene the 15-member council under the agenda item "threats to international peace and security" and have requested that UN disarmament affairs chief Izumi Nakamitsu brief the body.

The Pentagon said on Monday it had tested a conventionally configured cruise missile that hit its target after more than 500 km (310 miles) of flight, the first such test since the United States pulled out Cold War-era Intermediate-Range Nuclear Forces Treaty (INF).

US Defense Secretary Mark Esper was asked in a Fox News Channel interview on Wednesday whether the test was aimed at sending a message to China, Russia or North Korea and indicated that the main concern was China.

"We want to make sure that we, as we need to, can deter Chinese bad behaviour by having our capability to be able to strike at intermediate ranges," he said.

Esper said on a visit to Australia this month he was in favour of placing ground-launched, intermediate-range missiles in Asia relatively soon.
Esper was also asked about a rocket test accident in Russia this month which U.S. officials believe was associated with the Kremlin`s hypersonic cruise missile program.

“They are trying to expand their strategic nuclear arsenal to deal with the United States," he said, adding that all such new weapons would have to be included in any future strategic arms reduction treaty.

"Right now Russia has possibly nuclear-tipped ... INF-range cruise missiles facing toward Europe, and that`s not a good thing,” he said.

Russian President Vladimir Putin said on Wednesday the United States was in a position to deploy a new land-based cruise missile in Romania and Poland, a scenario he considered a threat that Moscow would need to respond to.

The United States has said it has no imminent plans to deploy new land-based missiles in Europe.

This week's US test would have been banned under the INF, which prohibited land-based missiles with a range of between 310 and 3,400 miles, reducing the ability of the United States and Russia to launch a nuclear strike at short notice. China was not a party to the INF treaty and has a large arsenal of land-based intermediate-range missiles.

Washington formally withdrew from the landmark 1987 pact with Russia on Aug. 2 after determining that Moscow was violating the treaty, an accusation the Kremlin has denied.

Chinese Foreign Ministry spokesman Geng Shuang said on Tuesday that the US test showed the United States was stoking a new arms race and confrontation, which would have a serious negative impact on regional and global security.

A North Korean spokesman said on Thursday the US test and plans to deploy F-35 jets and offensive military equipment around the Korean peninsula were "dangerous" moves that would "trigger a new Cold War" in the region.

Asked whether he thought it was appropriate for Washington to continue to seek negotiations with Pyongyang after its repeated recent tests of short-range missiles, Esper said the biggest US concern was about North Korea's long-range missiles, tests of which it has frozen since 2017.

"I think you need to take a look at the bigger picture," he said when asked if recent U.S. statements playing down the short-range tests amounted to giving North Korea permission to conduct them.