Robert Mueller 'should not testify' before US Congress: Trump 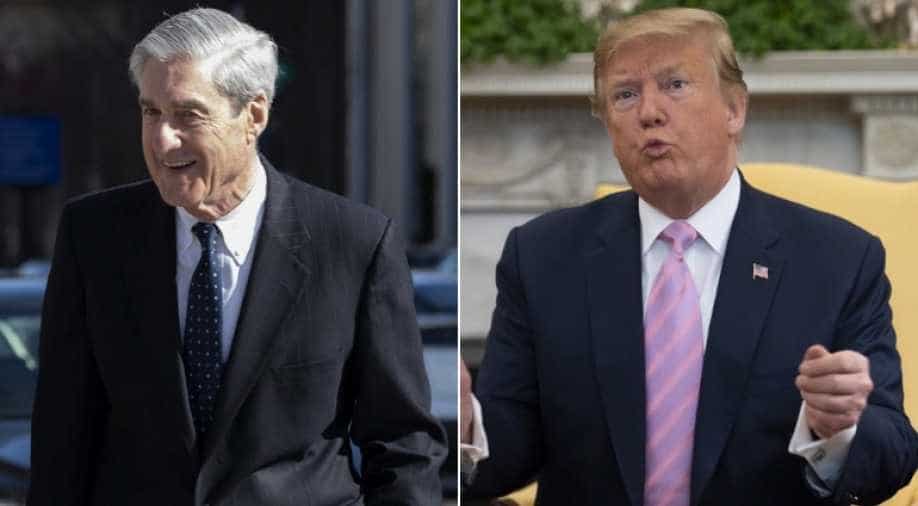 Trump's statement represented a reversal; he had said two days earlier that he would leave the matter up to Attorney General William Barr, who had raised no objection to Mueller testifying.

US President Donald Trump said Sunday that Special Counsel Robert Mueller "should not testify" before Congress on his Russia election meddling inquiry, setting up a confrontation with Democrats already irate over what they view as increasingly brazen administration stone-walling.

Trump's statement represented a reversal; he had said two days earlier that he would leave the matter up to Attorney General William Barr, who had raised no objection to Mueller testifying.

"There was no crime, except on the other side (incredibly not covered in the Report), and NO OBSTRUCTION. Bob Mueller should not testify," Trump tweeted. "No re-dos for the Dems!"

....to testify. Are they looking for a redo because they hated seeing the strong NO COLLUSION conclusion? There was no crime, except on the other side (incredibly not covered in the Report), and NO OBSTRUCTION. Bob Mueller should not testify. No redos for the Dems!

The report actually cited 10 "episodes" of potential obstruction of justice by the president, but it offered no verdict on whether he should be charged.

Jerry Nadler, the Democratic chairman of the House Judiciary Committee, has invited Mueller to appear before the panel "no later than May 23" to testify about the findings of his 22-month-long investigation.

Trump's comment might have been prompted by a remark earlier Sunday from a Democratic member of the committee, David Cicilline, who said on Fox that Mueller was tentatively set to testify on May 15.

Cicilline later stepped back from that, tweeting that "nothing has been agreed to yet."

Regardless, Trump's tweet represented a hardening of his own position and seemed certain to infuriate Democrats already angered by administration moves to impede a series of congressional inquiries.

Responding on April 24 to a congressional subpoena to one former aide, Trump said, "We're fighting all the subpoenas."

Some analysts predicted open political warfare over the constitutional division of powers, with Democrats defending Congress's right to conduct oversight and the president and his aides pledging to fight against what they describe as politically driven investigations.

"These aren't, like, impartial people," Trump said of the Democrats' subpoena requests. "The Democrats are trying to win 2020."

Trump's reversal on Mueller was sudden. When a reporter asked him on Friday whether Mueller should testify, he replied, "I don't know. That's up to our attorney general."

Barr told reporters on April 18, just ahead of the public release of a redacted version of the Mueller report, that "I have no objection to Bob Mueller testifying." He reiterated that position in testimony last week before the Senate Judiciary Committee.

But Trump's tweet Sunday left matters in a state of confusion.

Barr, whom Democrats accused of shedding an attorney general's traditional independence to serve as a Trump defender, remains Mueller's boss in the Justice Department and presumably could block him from testifying.

Democratic lawmakers were already upset with Barr, who refused to show up for scheduled testimony Wednesday before the Judiciary Committee in the Democratic-controlled House, a day after his appearance before the corresponding Senate panel.

Barr had objected to Democrats' plans to use outside attorneys to conduct part of the questioning; Democrats say this has been done before, notably in the Watergate hearings.

Democratic demands for Mueller to testify swelled after a March 27 letter from Mueller to Barr surfaced in which the special counsel complained that Barr's public summary of the report "did not fully capture the context, nature and substance" of investigators' work.

Democrats are also frustrated that Barr has yet to provide an unredacted version of the Mueller report to lawmakers.

The Justice Department said last week that it was "unable" to provide the investigative files Mueller compiled during his investigation, due to a "compelling need to protect the autonomy and effectiveness of its investigations."

Nadler on Friday gave Barr until Monday to reply to his request for a fuller version of the report.

"If the department persists in its baseless refusal to comply with a validly issued subpoena, the committee will move to contempt proceedings and seek further legal recourse," Nadler wrote.

Trump has also said he will not allow former White House counsel Don McGahn -- who was extensively interviewed by Mueller's team -- to testify.

"I don't think I can let him... because he was the counsel," Trump told Fox in an interview aired Thursday.

Mueller reported that Trump in mid-2017 ordered McGahn to have Mueller removed. McGahn also said the president later asked him to deny having made that request.