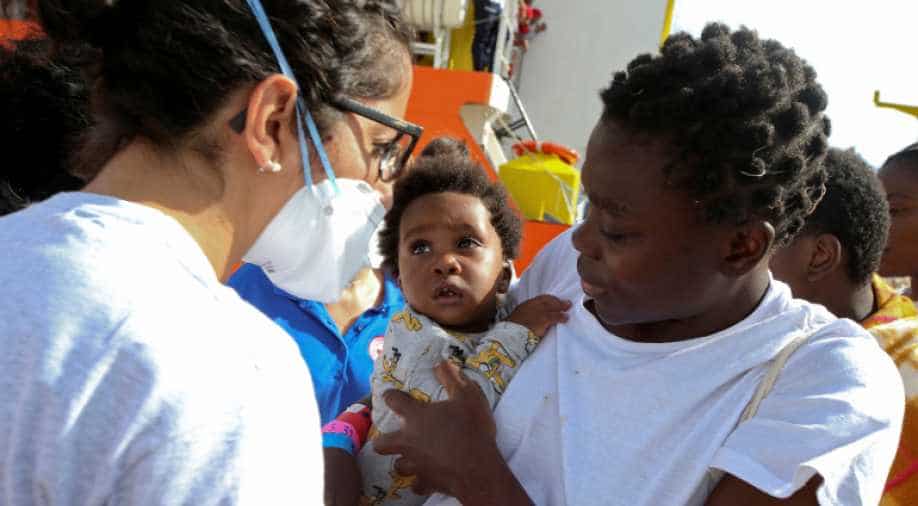 Migrants disembark from the MV Aquarius rescue ship, after being rescued by SOS Mediterranee organisation, in the Sicilian harbour of Trapani, Italy, September 16, 2017. Photograph:( Reuters )

"In the?Libyan?waters, at Sabratha, there are plenty of police," said Umaru, another migrant from Sierra Leone.

Migrants rescued in the Mediterranean last week said they had been lucky to dodge increased sea and police patrols along the Western coast of Libya that have dramatically reduced arrivals in Italy since July.

Last month, Reuters reported that an armed group was stopping departures from the city of Sabratha, which had been the main springboard for smuggling for the past two years, although some boats are still getting through.

On Thursday, the Aquarius rescue ship, run by humanitarian groups SOS Mediterranee and Doctors without Borders (MSF), picked up two rubber boats carrying a total of more than 260 migrants who had left from Sabratha.

"If you are unlucky they will catch you there are so many ships in the sea," Buba from Sierra Leone told Reuters a day after being picked up. He declined to give his last name. "If you are lucky you make it."

Italy has led the European Union's strategy to try to bolster the capability of local authorities and especially the Libyan coast guard so that they can shut down the central Mediterranean smuggling route, now the main one to Europe.

Arrivals in Italy of rescued migrants fell 50 per cent in July from a year earlier and declined more than 80 percent in August -- two months that had been peak periods during the previous three years.

Overall, there have been more than 100,000 arrivals in Italy this year, a decline of more than 20 percent compared to 2016, official data show.

"In the Libyan waters, at Sabratha, there are plenty of police," said Umaru, another migrant from Sierra Leone.

The Italy-EU strategy has been strongly criticised by charity groups, including MSF because migrants returned to Libya by the coast guard are detained arbitrarily in filthy centers with no healthcare, little food and abusive jailers. Often they must pay a ransom for their freedom.

Noor Cornelissen, the humanitarian affairs officer on the Aquarius, said it was common to hear stories from migrants who have been repeatedly returned to Libya.

"We talked to people who this has happened to, maybe two, three or even four times," she said.

"They find themselves in Libya, in captivity, they have to pay ransom to get out," she said.

"They tell us that at that point it's just being bought and sold, bought and sold ... whether they are being held by officials or by informal groups or even by private individuals."