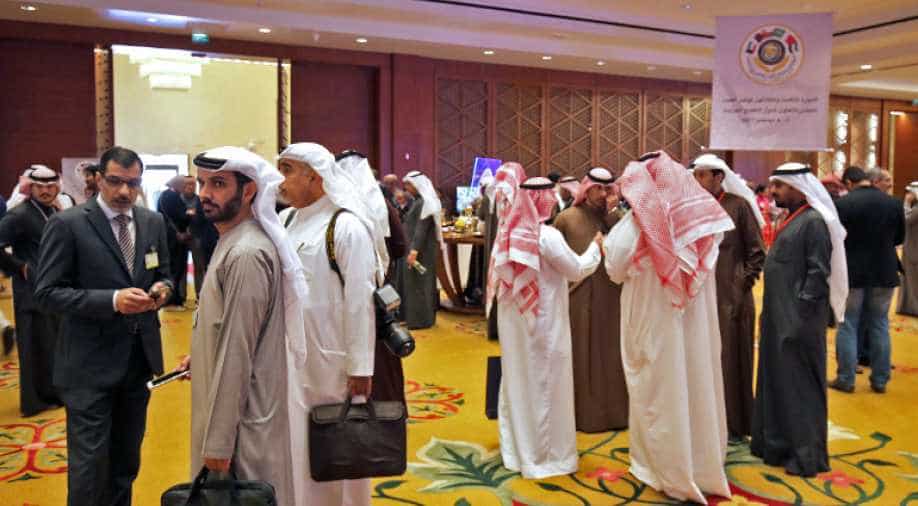 Kuwaiti and foreign journalists gather in the media centre hall during the meeting of the Gulf Cooperation Council (GCC) in Kuwait City on December 5, 2017. Photograph:( AFP )

Saudi Arabia, the United Arab Emirates, Bahrain and Egypt cut all diplomatic and transport ties with Qatar in June 2017

Saudi Arabia, the United Arab Emirates, Bahrain and Egypt cut all diplomatic and transport ties with Qatar in June 2017 over allegations it backs radical Islamists and seeks closer ties with Saudi arch-rival Tehran.

Signs of a thaw

Hopes of reconciliation were high after signs emerged of a thaw between Qatar and its former allies despite Doha's refusal to heed demands put forward by the boycotting countries.

Following Saudi King Salman's invitation to the emir, Qatar's foreign minister said there had been "some progress" in talks with Riyadh.

In a last-minute move last month, the three countries sent teams to a regional football tournament hosted by Qatar, leading to speculation of an imminent diplomatic breakthrough.

Some observers had said that the summit could pave the way for a "reconciliation conference".

Others remained sceptical, saying the king was only following protocol and had invited the Qatari leader to last year's summit as well.

The Qatari emir last year spurned that invitation and sent a representative instead, as he had to other summit since the crisis erupted in 2017.

Even though the emir will not attend the summit, negotiations to end the impasse are expected to continue, analysts say.

"Ending the Gulf rift is an incremental process of engagement and dialogue rather than something resolvable at a single summit meeting alone," said Kristian Ulrichsen, a fellow at Rice University's Baker Institute in the United States.

The Riyadh-led bloc has repeatedly said the crisis will not end until Qatar accepts its list of 13 demands, including that it shut down Al Jazeera, downgrade ties with Iran and close a Turkish military base in its territory. Doha has so far refused.

Qatar's prime minister attended a series of talks in Saudi Arabia in May, one of the first high-level contacts of the two-year boycott.

But even before the Saudi-led blockade, relations had been rocky, in part because of Qatar-based broadcaster Al Jazeera's critical coverage of the region's affairs and Doha's support for the Arab Spring uprisings of 2011.

The rift has seen the two sides trade barbs on everything from access to the Muslim holy city of Mecca to alleged Twitter hacking.

It has also seen families divided and Qatari businesses face increased costs as well as complicated regional travel and diplomacy.