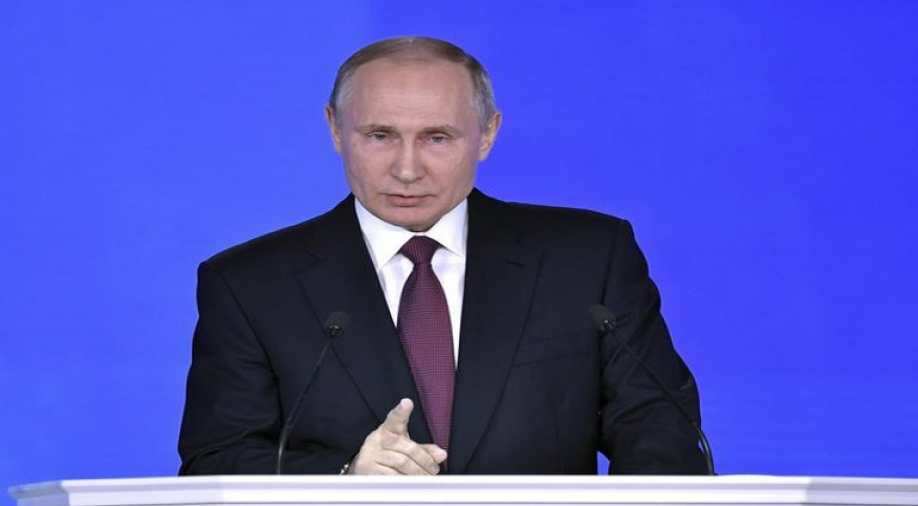 President Vladimir Putin announced an array of new nuclear weapons on Thursday, in one of his most bellicose speeches in years, saying they could hit almost any point in the world and evade a U.S.-built missile shield.

Putin was speaking ahead of an election on March 18 that polls indicate he should win easily. He said a nuclear attack on any of Moscow's allies would be regarded as an attack on Russia itself and draw an immediate response.

It was unclear if he had a particular Russian ally, such as Syria, in mind, but his comments looked like a warning to Washington not to use tactical battlefield nuclear weapons.

His remarks were greeted with scepticism in Washington, where officials cast doubt on whether Russia has added any new capabilities to its nuclear arsenal beyond those already known to the U.S. military and intelligence agencies.

The Pentagon, which recently announced a nuclear policy revamp based partly on the bellicose posture from Moscow, said it was not surprised by Putin's presentation.

"These weapons that are discussed have been in development a very long time," she told a news briefing, without addressing any of Putin's specific claims of new capabilities.

John Rood, U.S. under secretary of defense for policy, declined to comment on U.S. intelligence on Russian capabilities.

But, addressing a forum in Washington, Rood generally played down Putin's presentation, saying: "I think it's broadly consistent with things that have been stated before (by) Russian officials."

The Trump administration accused Moscow anew of violating a Cold War-era treaty which banned nuclear and conventional ground-launched ballistic and cruise missiles with a range of 500-5,500 km (300-3,400 miles).

"President Putin has confirmed what the United States government has known all along, which Russia has denied: Russia has been developing destabilizing weapons systems for over a decade in direct violations of its treaty obligations," White House spokeswoman Sarah Sanders said.

Putin has often used militaristic rhetoric to mobilise support and buttress his narrative that Russia is under siege from the West. His 2014 annexation of Ukraine's Crimea boosted his ratings to a record high and he has cast his military intervention in Syria as a proud moment for Moscow.

On Thursday, he sought to back his rhetoric with video clips of what he said were some of the new missiles. The images were projected onto a giant screen behind him at a conference hall in central Moscow where he was addressing Russia's political elite.

"They have not succeeded in holding Russia back," said Putin, referring to the West, which he said had ignored Moscow in the past, but would now have to sit up and listen.

"Now they need to take account of a new reality and understand that everything I have said today is not a bluff."

Among weapons that Putin said were either in development or ready was a new intercontinental ballistic missile "with a practically unlimited range" able to attack via the North and South Poles and bypass any missile defence systems.

Putin also spoke of a small nuclear-powered engine that could be fitted to what he said were low-flying, highly manoeuvrable cruise missiles, giving them a practically unlimited range.

The new engine meant Russia was able to make a new type of weapon - nuclear missiles powered by nuclear rather than conventional fuel.

"Nothing like it in the world exists," Putin told the audience. "At some point it will probably appear (elsewhere) but by that time our guys will have devised something else."

In one of his video clip demos, a weapon appeared to be hovering over what looked like a map of the state of Florida.

"It was certainly unfortunate to have watched the video animation that depicted a nuclear attack on the United States," State Department spokeswoman Heather Nauert told a news briefing. "We don't regard that as the behavior of a responsible international player."

Putin's audience, made up of Russian lawmakers and other leading figures, frequently stood up and applauded his presentation, which culminated with the Russian national anthem being played.

Earlier in the speech, he had struck a very different tone, ordering officials to halve the number of Russians living in poverty by sharply boosting social and infrastructure spending in an obvious pre-election pitch to voters.

Putin, who has dominated his country's political landscape for the last 18 years, said the technological advances meant that NATO's build-up on Russia's borders and the roll-out of a U.S. anti-missile system would be rendered useless.

"I hope that everything that was said today will sober up any potential aggressor," said Putin.

"Unfriendly steps towards Russia such as the deployment of the (U.S.) anti-missile system and of NATO infrastructure nearer our borders and such like, from a military point of view, will become ineffective."

Steps to contain Russia would also become unjustifiably expensive and pointless, he forecast.

Russian Defence Minister Sergei Shoigu said in a statement after the speech that the new weapons Putin had unveiled meant that NATO's missile defence shield, in Poland, Romania and Alaska and planned elements in South Korea and Japan was like an umbrella that was full of holes.

"I don't know why they would now buy such an 'umbrella'," Shoigu said, referring to Seoul and Tokyo.

The United States has long asserted that U.S. missile defenses are incapable of halting a large-scale attack by a major nuclear power, like Russia or China, due in part to the limited number of U.S. missile interceptors.

Instead, the technology is aimed at what the United States views as "rogue" states, such as Iran or North Korea.

"They know very well that it's not about them. Our missile defense has never been about them," White said.

She added that the U.S. focus in addressing Russia's nuclear modernization was strengthening America's own nuclear forces to serve as a deterrent.

Lisbeth Gronlund, senior scientist and co-director of the Global Security Program of the Union of Concerned Scientists, said Putin's announcement of a missile with a nuclear-powered engine, even if true, would change little when it came to the Russian threat since Russia already has large numbers of ICBMs.

Putin also voiced concerns about a new U.S. nuclear doctrine, saying Russia's own doctrine was defensive and only envisaged the use of nuclear weapons in response to an attack.

Russia has repeatedly said it is keen to hold talks with the United States about the balance of strategic nuclear power and Putin put Washington and other nuclear powers on notice.

"We will view any use of nuclear weapons against Russia or its allies, be it of small, medium or any force, as a nuclear attack on our country," he said.

"Our response will be immediate. Nobody should have any doubts about that."

Putin said that Russia did not plan to attack anyone, however. Russia's growing military might was a guarantee of world peace, he said, designed to preserve a strategic balance of power on the planet.