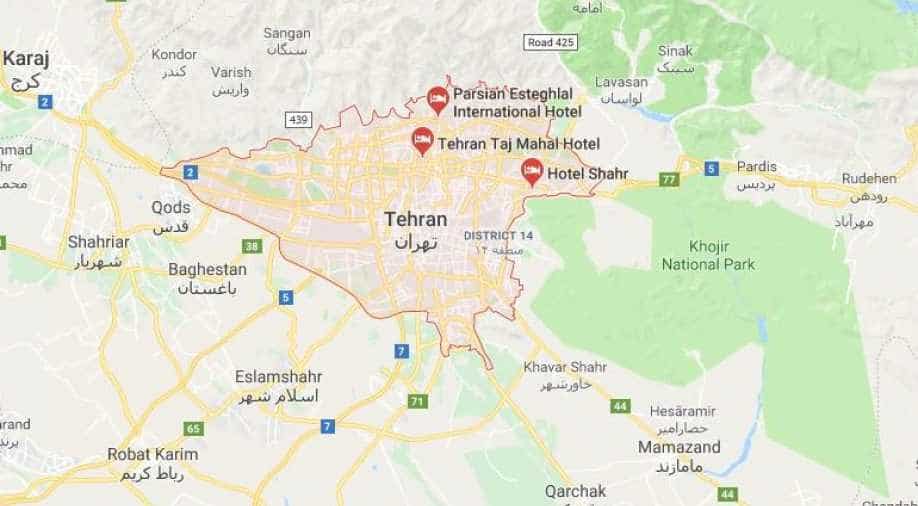 There was chaos around the University of Tehran as several hundred people scuffled with police and shouted slogans against the regime for several hours. Photograph:( Others )

Tear gas filled the streets of downtown Tehran on Saturday as protests spilled into a third day, with the government warning against further "illegal gatherings".

There was chaos around the University of Tehran as several hundred people scuffled with police and shouted slogans against the regime for several hours, bringing traffic to a standstill.

But the regime also put on a show of strength, with hundreds of counter-demonstrators seizing control of the university entrance in Tehran, chanting "Death to the seditionists".

Videos shared by social media users outside Iran claimed to show thousands marching peacefully in several cities including Khorramabad, Zanjan and Ahvaz, with chants of "Death to the dictator".

But a swirl of wild rumours online, combined with travel restrictions and a near-total media blackout from official agencies, made it difficult to verify footage.

The authorities were fortunate that annual rallies marking the defeat of the last major protest movement in 2009 were already scheduled for Saturday morning and brought thousands of regime enthusiasts to the streets across the country.

"We urge all those who receive these calls to protest not to participate in these illegal gatherings as they will create problems for themselves and other citizens," warned Interior Minister Abdolrahman Rahmani Fazli.

The protests began in the second city of Mashhad on Thursday as an attack on high living costs but quickly turned against the Islamic regime as a whole.

There were even chants in favour of the monarchy toppled by the Islamic revolution of 1979, while others criticised the regime for supporting the Palestinians and other regional movements rather than focusing on problems at home.

State news channel IRINN said it had been banned from covering the protests that spread to towns and cities including Qom and Kermanshah.

"The enemy wants once again to create a new plot and use social media and economic issues to foment a new sedition," Ayatollah Mohsen Araki, a prominent cleric, told a crowd in Tehran, according to the conservative Fars news agency.

Other officials also pointed the blame outside Iran.

"Although people have a right to protest, protesters must know how they are being directed," Massoumeh Ebtekar, vice president in charge of women`s affairs, wrote on Twitter.

She posted images from Twitter accounts based in the United States and Saudi Arabia, voicing support for the Mashhad protests. Nonetheless, officials warned against dismissing the public anger seen in recent days.

"People have the right for their voice to be heard."

There has been particular anger at welfare cuts and fuel price increases in the latest budget announced earlier this month.

Since the 2009 protests were ruthlessly put down by the Revolutionary Guards, many middle-class Iranians have abandoned hope of pressing for change from the streets.

But low-level strikes and demonstrations have continued, often on a sector-by-sector basis as bus drivers or teachers or workers from specific factories protest against unpaid wages or poor conditions.

Some of this week`s protests were directed against financial scandals linked to unauthorised lending institutions which collapsed with the loss of hundreds of thousands of accounts.

Payam Parhiz, editor-in-chief of reformist media network Nazar that broke the news of the Mashhad protests, said they were more focused on the economy than those in 2009, which were sparked by allegations of election-rigging.

"Then, they were middle-class and their slogans went beyond economic matters to things like cultural liberties," he told AFP.

"Today, the concerns are economic. There are people who have lost their life savings. They will protest until their problems are resolved."

Since taking power in 2013, President Hassan Rouhani has sought to clean up the banking sector and kickstart the economy, but many say progress has been too slow.

Aware that economic problems can quickly spiral into political chaos, officials from across the political spectrum have called for greater efforts to tackle poverty and the 12 percent unemployment rate.