Protesters spill back onto bridge in Iraq capital 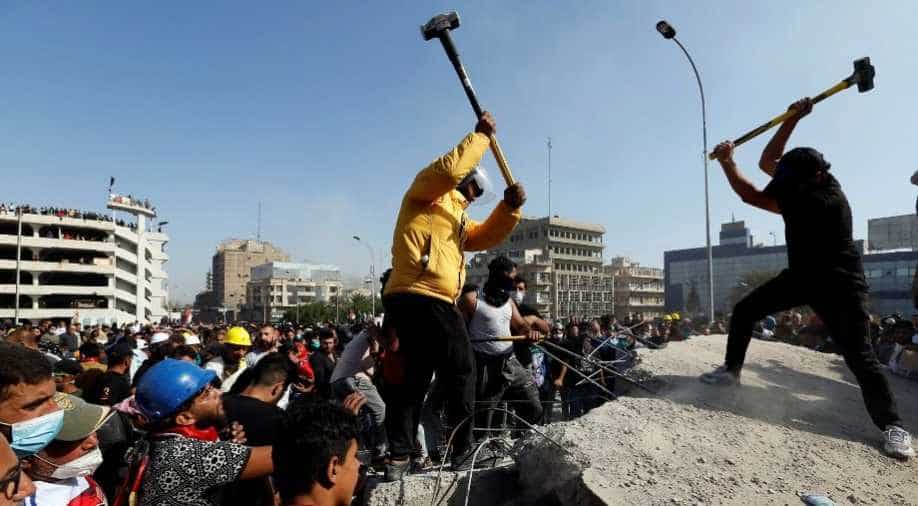 Sit-ins have become the go-to tactic for the regime change movement that erupted in early October, with a general strike annnounced by activists for Sunday.

Anti-government demonstrators spread to a second bridge in the Iraqi capital Saturday after security forces retreated from a key area where they had clashed with protesters, AFP correspondents said.

Sit-ins have become the go-to tactic for the regime change movement that erupted in early October, with a general strike annnounced by activists for Sunday.

The bridges link east Baghdad to the city's west, including the Green Zone where the prime minister's office, parliament and foreign embassies are based.

Security forces retook three of those bridges and nearby districts more than two weeks ago, pinning the protesters back in Tahrir and on Al-Jumhuriyah bridge with volleys of tear gas, live ammunition and even machine-gun fire.

On Saturday morning, Iraqi units pulled back from some of those areas and crowds of protesters chased them down, resuming their sit-in at the mouth of Al-Sinek bridge.

"The security forces withdrew to another concrete barrier on Al-Sinek," one protester told AFP.

An elderly woman, who had travelled from the southern port city of Basra to join the rallies, cheered in support.

"You didn't just lose us, you lost all of Iraq!" she said, addressing Prime Minister Adel Abdel Mahdi.

"Get out, get out, there's no place for you here. Tonight, we'll be in the Green Zone," she said.

Dozens climbed up into a large parking complex near the bridge, unfurling a sign in support of demonstrators in nearby Tahrir.

Others set up checkpoints around Tahrir, the morning after a bomb blast that shook the protesters.

On Friday night, at least one person was killed and more than a dozen wounded in Tahrir when explosives beneath a parked car detonated, Iraq's state security forces said.

Small clusters of men deployed around the square to search all those entering it throughout the day on Saturday.

"We had a security breach yesterday and this explosion happened," said Abu Karrar al-Basrawi, a middle-aged man from Basra volunteering for the search.

"But we've multiplied our checkpoints so it doesn't happen again," he told AFP.

Activists and medics have described a climate of fear setting in around Tahrir, saying that anonymous threats, kidnappings and even killings are an attempt to snuff out the movement.

Late on Friday, activist Adnan Rustum was shot dead near his home in Baghdad, his relatives said.

And on Saturday, a person died of wounds sustained the previous day in protests in the southern city of Nasiriyah.

More than 330 people have been killed since the protests erupted in October and over 15,000 have been wounded, but officials are not releasing updated or precise figures.