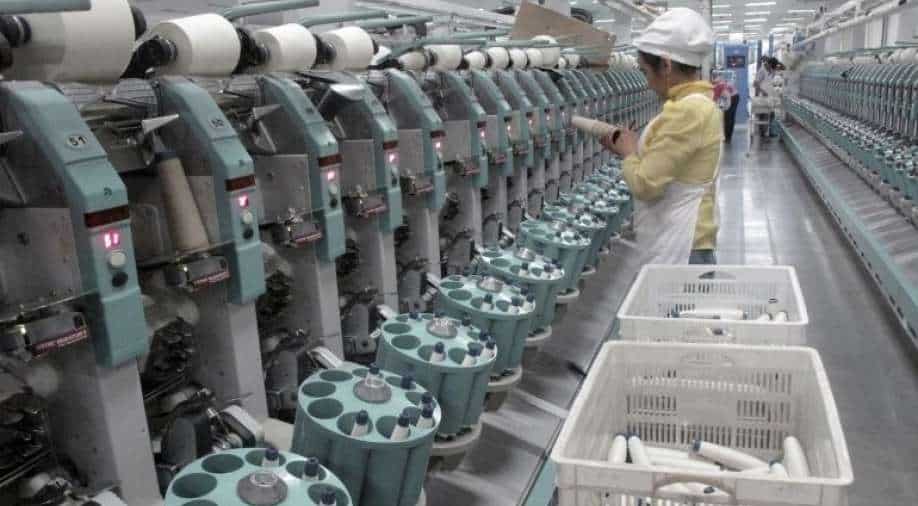 A worker is seen in Youngor's cotton spinning factory, in Aksu, Xinjiang Uighur Autonomous Region. The Chinese government denies that abuses are occurring in Xinjiang, which supplies much of the world's solar panels. The United States government, and many rights groups however, claim genocide is taking place. Photograph:( Reuters )

The Uyghur Forced Labor Prevention Act sets its sights on three products in particular: cotton, of which Xinjiang is one of the world's major producers; tomatoes; and polysilicon, a material used to produce solar panels.

President Joe Biden signed a law Thursday virtually banning all imports from the Chinese region of Xinjiang in response to concerns over forced labour, as US companies find themselves caught in the diplomatic fray.

The bill, which was approved by Congress last week, bans the import of all goods from the region unless companies offer verifiable proof that production did not involve forced labour.

The Uyghur Forced Labor Prevention Act sets its sights on three products in particular: cotton, of which Xinjiang is one of the world's major producers; tomatoes; and polysilicon, a material used to produce solar panels.

In a rare bipartisan move, the Senate last week unanimously voted to make the United States the first country to ban virtually all imports from the region.

The vote came despite lobbying by US firms, many of which are heavily dependent on Chinese suppliers and already facing massive disruption due to trade disturbances caused by the coronavirus pandemic.

The law gives the government "new tools to prevent goods made with forced labour in Xinjiang from entering US markets and to further promote accountability for persons and entities responsible for these abuses," Secretary of State Antony Blinken said in a statement, calling on China to end "genocide and crimes against humanity."

The law also requires the US president to impose sanctions on Chinese officials responsible for human rights abuses in the region.

China's foreign ministry urged the United States to "immediately correct its mistakes," threatening to "make a further response," in a statement.

An estimated 20 per cent of garments imported into the United States each year include some cotton from Xinjiang.

Rights experts, witnesses and the US government say more than one million Uyghurs and other Turkic-speaking Muslims are incarcerated in camps in an effort to root out their Islamic cultural traditions and forcibly assimilate them into China's Han majority.

Washington has described the campaign as genocide.

Republican opposition has criticized the White House for slow movement on the matter.

On Thursday, White House press secretary Jen Psaki was asked about the relative discretion with which Biden signed the text, despite having made countering China a major axis of his foreign policy.

The White House released only a photo of the signing on Twitter, while Biden signed a law -- with cameras rolling -- intended to support research against a rare neurodegenerative disease.

He signs bills "off camera sometimes (and) sometimes on camera. We support the bill and obviously we've been leading the effort in the world to call out human rights abuses," Psaki said.

Washington has already hit some Chinese officials and businesses with sanctions and announced a diplomatic boycott of the Beijing Olympics in protest of the conditions in Xinjiang.

Beijing describes the sites as vocational training centers and says it is seeking to reduce the allure of radical Islam following deadly attacks.

Implementation of the law and the US offensive against certain Chinese economic interests is causing friction for some companies, such as US semiconductor giant Intel, which on Thursday issued an apology over a letter to its suppliers.

In the wake of the US bill's passage in the Senate, the company had asked suppliers to avoid sourcing in the region.

Following public outcry in China, the chipmaker expressed its regret for the comments in a statement posted on Weibo, the Chinese social media platform.

"We believe the private sector and the international community should oppose the PRC's weaponizing of its markets to stifle support for human rights," Psaki said, using an acronym for the People's Republic of China.

"We also think that American companies should never feel the need to apologize for standing up for fundamental human rights or opposing repression," she added.