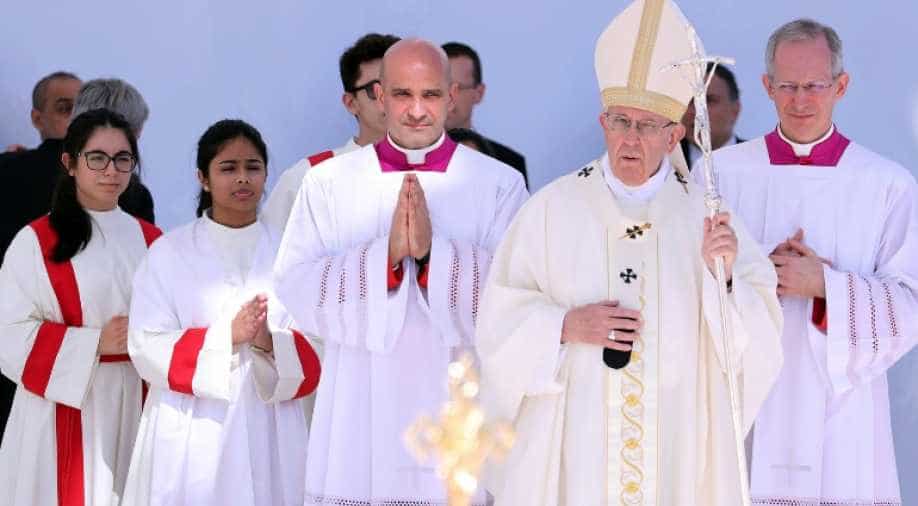 An estimated 60,000 worshippers gathered for the mass, some pouring into a nearby stadium to watch the hymn-filled service on large screens.

Pope Francis led an impassioned mass for tens of thousands of emotional worshippers at a packed Bangkok stadium Thursday, urging respect for prostitutes and trafficking victims in a part of the world where sex work is rampant.

The remarks came at the end of a whirlwind day of meetings for Pope Francis, who is on his first trip to Buddhist-majority Thailand where he is carrying a message of religious harmony and peace.

He heads to Japan next, visiting the twin atomic bombs sites of Nagasaki and Hiroshima where he will seek a ban on "immoral" nuclear weapons.

The 82-year-old arrived at the stadium in a golden robe woven for him from Thai silk, greeting crowds of flag-waving faithful, some wiping tears from their faces at the sight of the leader of the world's 1.3 billion Catholics.

An estimated 60,000 worshippers gathered for the mass, some pouring into a nearby stadium to watch the hymn-filled service on large screens.

Known for his down-to-earth style, the Pope did not shy away from difficult topics at the mass.

He focused his message on helping vulnerable children and women "who are victims of prostitution and human trafficking, humiliated in their essential human dignity".

He also referred to drug addicts, migrants and "exploited sinners and bypassed beggars".

"All of them are part of our family. They are our mothers, our brothers and sisters. Let us not deprive our communities of seeing their faces, their wounds, their smiles and their lives," said the Pope, after leading prayers.

The remarks were delivered in a region infamous for thriving sex trade and unchecked human trafficking.

Prostitution is illegal in tourist hotspot Thailand, home to at least 300,000 sex workers, some four per cent of whom are believed to be trafficked, according to official estimates.

Many women are drawn to the work because they can earn up to 10 times more than the minimum wage, and critics say some corrupt Thai authorities turn a blind eye to the thriving trade.

Earlier, the Pope praised Thailand's efforts to stamp out the "scourge" of exploitation and enslavement of women and children, urging a "dignified" future for vulnerable youth.

Thailand has not had a visit from a pontiff since John Paul II in 1984, and the small but spirited Catholic community was thrilled ahead of the mass.

Just over 0.5 per cent of the population is Catholic but the community has been here for centuries.

For Pimrapat Panyawattanatikul, the service was her second shot at seeing a pope after John Paul II touched her head some 35 years ago.
Now she's hoping her mother will get a similar honour, with the pair sitting right on the track Francis was set to drive past in his Popemobile.

"It's a miracle we got these seats. It's my mom's dream to see the pope and to go to Italy. This is a gift from God," Pimrapat told AFP, her mother next to her clutching a rosary.

The Pope's colourful mass capped a packed schedule on the first full day of Thailand where he was welcomed Wednesday by cheering worshippers in Bangkok eager for a glimpse of his motorcade.

On Thursday Francis followed in the footsteps of John Paul II, paying a visit to the supreme Buddhist patriarch Somdej Phra Maha Muneewong at one of Bangkok's famed gilded temples.

The pair sat before a brilliant gold Buddha statue inside the ornate temple, built 150 years ago by the former Thai King -- the supreme patriarch barefoot and draped in orange robes as they spoke.

The Pope reciprocated the gesture, removing his shoes for part of the tete-a-tete.

In an earlier speech, the Pope said the meeting was "a sign of the importance and urgency of promoting friendship and inter-religious dialogue".

This visit coincides with the 350th anniversary of the founding of the "Mission de Siam", marking the first papal mission from Europe in the 17th century.

On Friday the pontiff will host another mass, this one for young people, and meet with religious leaders in the city.

He jets to Japan Saturday, where he will visit Hiroshima and Nagasaki, both devastated when the US dropped atomic bombs at the end of World War II in 1945.

The pope, who years ago had hoped to be a missionary in Japan, has made strong calls for a ban on nuclear weapons.