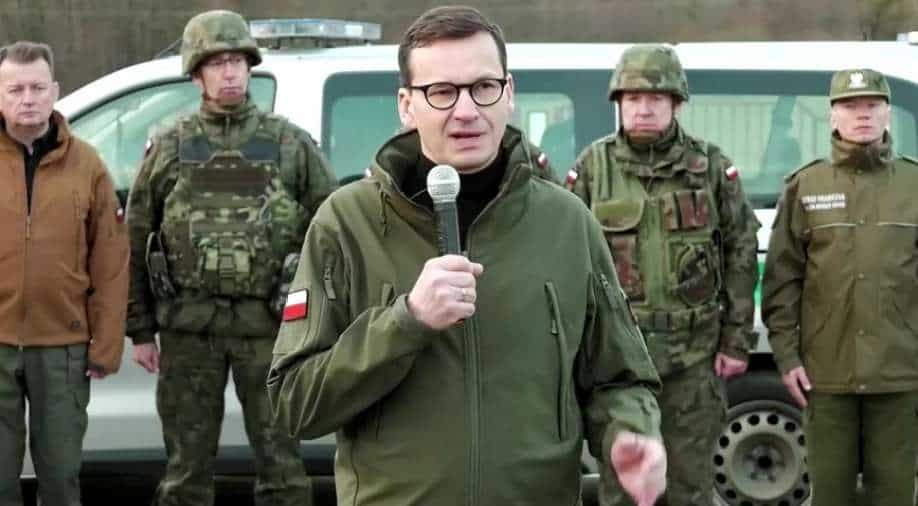 In this picture, Poland's Prime Minister Mateusz Morawiecki can be seen speaking during his visit to the border with Belarus near Kuznica Photograph:( Twitter )

Polish Prime Minister Mateusz Morawiecki has accused the Belarusian President of launching the greatest bid to destabilise Europe since the Cold War.

He took to Twitter and said ''Lukashenko launched a hybrid war against the EU. This is the greatest attempt to destabilize Europe in 30 years. Poland will not yield to blackmail and will do everything to defend the EU’s borders.''

Lukashenka launched a hybrid war against the EU.This is greatest attempt to destabilize Europe in 30years. 🇵🇱will not yield to blackmail and will do everything to defend the EU’s borders. PL, LT, LV, EST need support.We must stand together to defend Europehttps://t.co/OMEtY70vlo

It comes after Belarus cleared a migrant camp near the border and started to repatriate some people to Iraq.

Minsk has been accused by the West of orchestrating the migrant crisis at the Polish border and trucking hundreds of refugees to the frontier.

However, Lukashenko has denied the charges and said "We're Slavs. We have hearts. Our troops know the migrants are going to Germany... Maybe someone helped them."

"But I didn't invite them here."

Rights groups have criticised Poland's nationalist government over its treatment of migrants, with accusations of multiple pushbacks and failure to provide medical support as well as adequate food and shelter.

About 10 migrants are believed to have died in woods along the border with frigid winter setting in, according to local authorities, and many more have sustained injuries or suffered without food or water for days.

Poland has imposed a state of emergency close to the border and does not let journalists or NGOs operate in the area.

It says its uniformed services provide adequate care to migrants who make it into Poland when necessary.