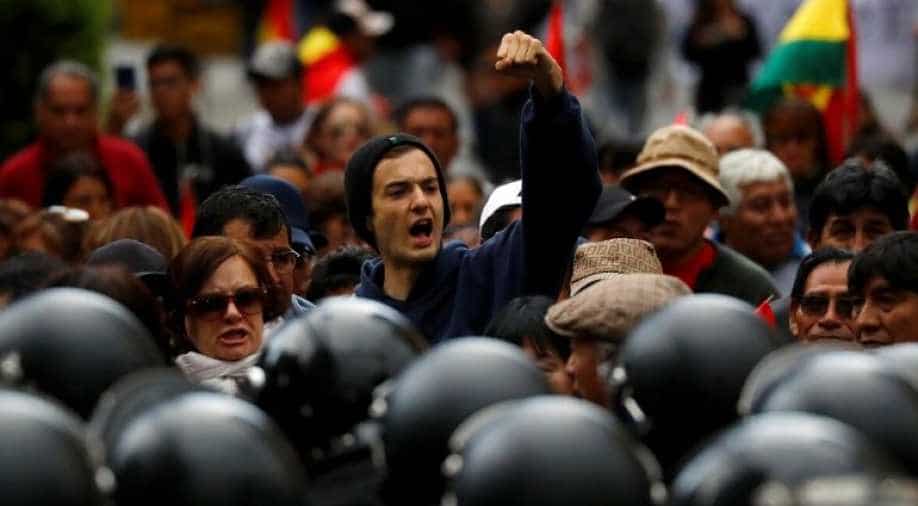 The defence minister said the government has for now ruled out a military operation against the rebellious police as the political crisis stemming from last month's vote escalated.

Police in three Bolivian cities joined anti-government protests Friday, in one case marching with demonstrators in La Paz, in the first sign security forces are withdrawing support from President Evo Morales after a disputed election that has triggered riots.

The defence minister said the government has for now ruled out a military operation against the rebellious police as the political crisis stemming from last month's vote escalated.

Morales took to Twitter to denounce the police rebellion as a coup. "Before the international community, we denounce this attack on the rule of law," Morales wrote. He called on Bolivians to protect their democracy and constitution.

Morales earlier convened an emergency meeting with some of his ministers. The scope of the police rebellion was not immediately clear.

Bolivia has been rocked by deadly violence over opposition claims that Morales rigged his re-election last month.

On Friday dozens of police joined demonstrators marching along Prado Avenue in the capital and shouting slogans against Morales, AFP observed.

In some La Paz neighbourhoods, the police retreated to their barracks rather than take on protesters who shouted: "Police, our friends, the people are with you."

Elsewhere, units in the southeastern city of Sucre and the opposition stronghold of Santa Cruz said they were joining a rebellion launched by police officers in the central city of Cochabamba.

Police in Sucre "are joining in support of the comrades who have mutinied in Cochabamba," a uniformed officer, his face covered, told local TV from the door of a police station.

"We cannot continue with this narco-government, with this unjust democracy," he told the television.

Hundreds of opposition supporters crowded around police stations in La Paz and in the northeastern city of Trinidad to urge police there to reject Morales.

A 20-year-old student died in clashes Wednesday between pro- and anti-government demonstrators in Cochabamba, bringing the overall toll to three dead since the disputed October 20 election.

Luis Fernando Camacho, an opposition leader, thanked the police who have split with the government. It was Camacho who over the weekend urged the security forces to join the opposition.

"I cried with joy," he tweeted. "Our police are so great. Thanks for siding with the people. May God bless you."